Mrs. Rajavi highlighted how far the Resistance in Albania has come over the past few years, highlighting that not even two years ago, the area they are presently gathering in was a piece of bare land and now Ashraf 3 has been constructed with great efforts from many.

She said that the final destination on this journey is Tehran when it is “freed from the occupation of the mullahs” that have destroyed the most beautiful country.

Pointing to the history of the Iranian Resistance, Mrs. Rajavi said that Massoud Rajavi “forged a deep-rooted and resolute resistance against the religious dictatorship of the mullahs” and the National Council of Resistance of Iran (NCRI). She said that since 1981, the journey has stopped and started and changed route. There has been a decade of “blood-drenched perseverance” at Camp Ashraf and four years marked by bloodshed and determination at Camp Liberty.

Today a new chapter opens, she said, but the huge suffering and “roaring river of the martyrs’ blood” cannot be forgotten. Massoud Rajavi had said on the first anniversary of the Resistance that the nation must “ultimately free herself on her own” – words that resonate now more than ever.

“For the people of Iran, the forty years of the mullahs’ rule is synonymous with an all-out massacre.” Mrs. Rajavi spoke about the terrible events over the past four decades, including the huge number of executions that take place on a daily basis, the 1988 massacre of political prisoners, the regime’s destruction of the economy and production and its absolute suppression of the culture and art, and of course the Iranian civilization.

However, Mrs. Rajavi said that the regime’s rule is reaching the end and that it will not be able to overcome the current crisis. Yet, it has come at a big cost. More than 70 percent of industrial capacity has been eliminated and the banking sector has been destroyed. The country’s national currency has seen its value drop enormously. Mrs. Rajavi said that the regime has reached a dead-end and there is no way out. “It neither has the capability to negotiate, abandon terrorism or stop meddling in the region, nor does it have any space to manoeuvre like it did during the appeasement era.”

The regime’s Supreme Leader Ali Khamenei referred to negotiations with the U.S. as “poison”. Mrs. Rajavi explained that this is because any change in the regime’s behavior is tantamount to regime change. 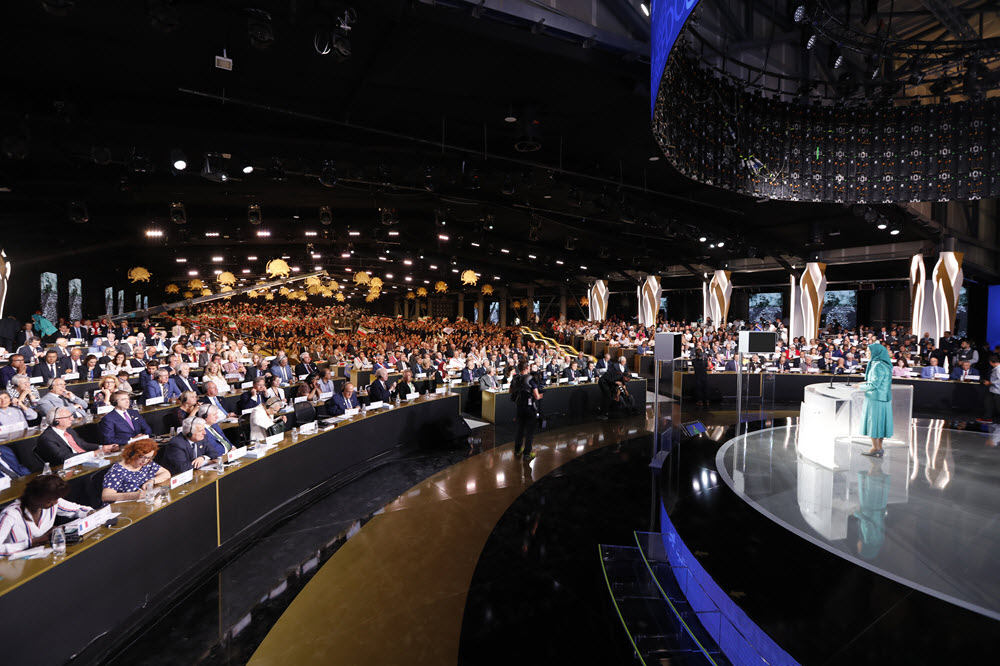 Mrs. Rajavi spoke about the direction in which Iran is moving at the minute, stating that suppression is on the rise and terrorization and demonization is spreading further towards the Iranian Resistance – the regime’s biggest threat. The Resistance movement is calling for the absolute clerical rule to be replaced and the regime has been fighting against this for four decades. Mrs. Rajavi said that on the international front, the regime is hoping for further inaction and tolerance from foreign leaders. She also explained that the regime is holding tight until the next presidential election in the United States. It hopes for another president like Obama that turned a blind eye to Iran’s belligerence.

Mrs. Rajavi said that the Iranian Resistance, during the nuclear deal negotiations, had warned against circumventing the six UN Security Council resolutions and called for uranium enrichment to be completely halted. The Resistance also called for inspectors to be granted unhindered access to all suspect sites. She recalled the words that she said in 2015 before the deal was signed when she stated that “the mullahs only understand the language of force and firmness”. Mrs. Rajavi called for the end of all appeasement and said that the regime should not be given concessions. She also called on world powers to recognize the people of Iran’s role in this and the suppression they have endured and the human rights they have been denied. Then, the deal was signed and the Resistance was appalled that the Iranian people and their rights were completely overlooked and ignored in the deal. It said further suppression would ensue, and it was correct.

Moving to recent developments, Mrs. Rajavi said that a series of events have marked an escalation in the region. Iran announced that it would increase its uranium enrichment to levels beyond what the nuclear deal allows in a bid to gain leverage. It is using pressure tactics and only last week President Hassan Rouhani attempted to blackmail and humiliate European countries by saying that the Arak reactor will be reverted back to its previous condition. The regime is pushing back against the international community and it is increasing turmoil and chaos in order to hide its fear about its imminent collapse. But Mrs. Rajavi promised that the regime is in its “final chapter” and that it cannot “find a way out of its inevitable downfall”.

Mrs. Rajavi said that the regime apologists have ignored the regime’s terrorism. They allowed the Mojahedin to be blacklisted. She said that the “obscuring curtains” are finally being pulled away “one by one”. Mrs. Rajavi said that Iran is undeniably the biggest source of war and warmongering and she reiterates that “fighting against this regime is equivalent to seeking peace because it eliminates the source of war and turmoil”.

“The spin doctors of the clerical regime used to claim that if the mullahs were to be overthrown, Iran would experience war, turmoil and secessions. Now, everyone can see that so long as this regime remains in place, war and crises will continue and intensify in the region. Therefore, anyone who seeks freedom for Iran, anyone who wants to save Iran from destruction and chaos, anyone who wants global and regional peace and stability, must rise up to demand the overthrow of the mullahs’ regime.”

Those that seek to appease the regime say that firmness will lead to war. Mrs. Rajavi calls this a “big ruse and deception”. She gave the example of Albania that expelled the mullahs’ ambassador in December last year following the regime’s terrorist plots there. The regime must be shown that there will be consequences and the United States and Albania have done so.

Mrs. Rajavi spoke about the role of the Iranian Resistance over the past few years, highlighting that it has been instrumental in exposing the threat that the regime presents to regional and world peace. It has exposed the suffering caused by the regime and it played a role in ending the Iran-Iraq war. It has published extensive evidence about the regime’s terrorist activities, its nuclear projects and its nuclear facilities. It told the world about the regime’s bomb-making program. Without the Resistance, who knows what further devastation the regime would be responsible for.

Regime change is the only solution. Mrs. Rajavi said that promises of moderation can never be fulfilled. “Everyone knows that under absolute repression and intimidation, and as long as there is no chance for gatherings, demonstrations, opinion polls, and free elections, the only genuine benchmark (of legitimacy) is resistance.” She said that the resolve of the PMOI freedom fighters and the great efforts of those that support the Resistance, and the exiled Iranians, will see that regime change happens.

In reference to the many units of rebellion inside Iran, Mrs. Rajavi was pleased to say that there has been a “major breakthrough”. The networks in the country are expanding and Ashraf is being replicated all over Iran, despite pervasive repression. Mrs. Rajavi stressed that regime change will come from within the country. “From a strategic standpoint, the units of rebellion are the answer to a regime that is incapable of reform and will not fall on its own weight. Rather, it can and must be overthrown through the struggle of the Mojahedin, the units of rebellion and the people of Iran.”

Mrs. Rajavi said that the regime will never be able to break the morale of the Resistance. She said that a rebellion unit in Tabriz said that it “will stand until the end and will get through all the ups and downs”. It affirmed: “Victory is ours and the dawn is looming.”

There are two sides to the fight over the fate of Iran. The regime and the Resistance. Mrs. Rajavi said that the alternative to the regime “is capable of establishing a democratic and pluralist republic based on the separation of religion and state, gender equality, autonomy of Iran’s ethnic groups, and a non-nuclear Iran”.

Finally, Mrs. Rajavi reassured those listening that Iran will be taken from the mullahs’ grasp. She said: “The National Council of Resistance of Iran has concrete plans and programs. Thanks to its organization and cohesiveness, the NCRI can replace the regime and is able to ensure a peaceful transition of power to the Iranian people’s elected representatives.”

“Yes, the day is not far when Iran, the Land of Lion and Sun, will embrace freedom. We are determined to create a new future, a new plan devoid of tyranny, reactionary thought, duplicity and discrimination. A new design for a free and prosperous Iran. So, we will sing in unison as we march toward victory: we will take back Iran and we will build a new homeland.”