Mrs. Rajavi discussed the expansion of the Justice for the Victims of the 1988 Massacre movement among Iranians and human rights advocates from around the world. Urging the UN Human Rights Council and the UN High Commissioner for Human Rights to launch an international commission of inquiry to investigate this crime, Mrs. Rajavi emphasized, “How the international community approaches this genocide and this crime against humanity is a litmus test of its adherence to the principles of human rights. The prosecution and punishment of the perpetrators and masterminds of the 1988 massacre are the inalienable rights of human society, the people of Iran, and the PMOI (MEK).” She also asked the UN Security Council to prosecute the perpetrators of this crime against humanity, many of whom presently serve in the leadership of the regime. 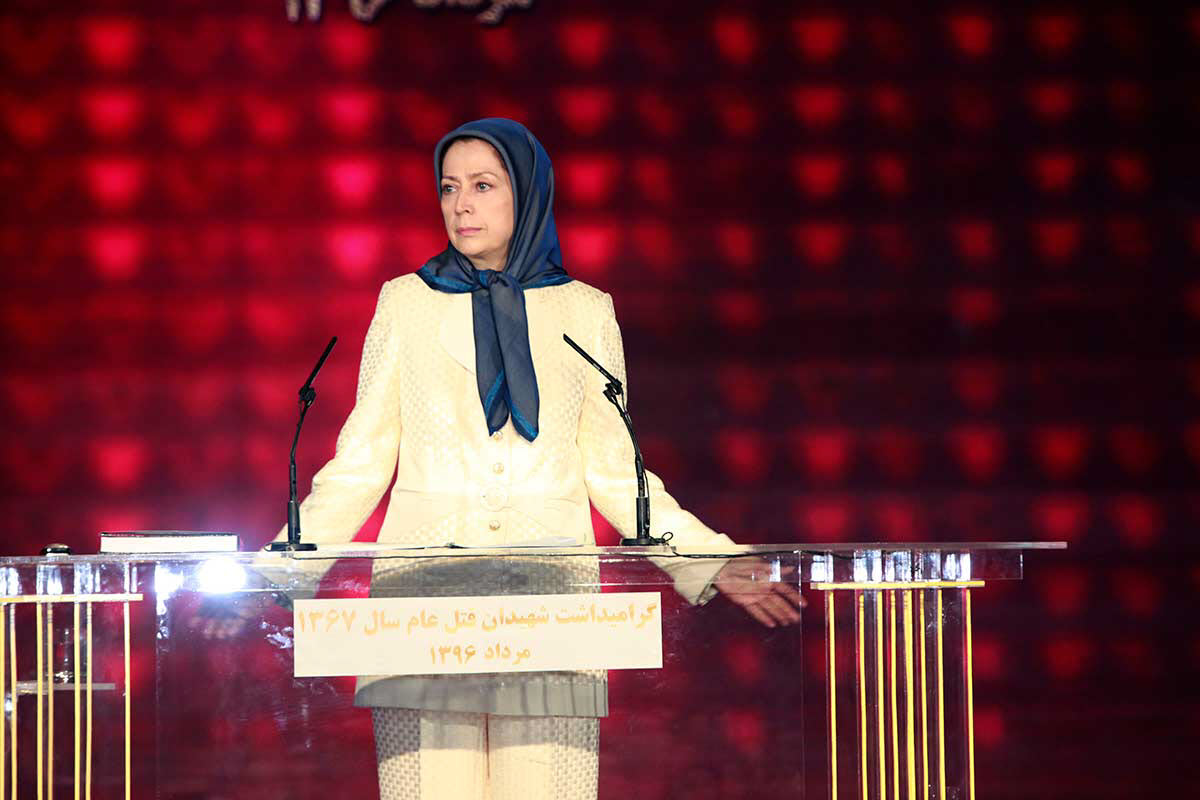 Admissions to this crime were made by some of the officials in reaction to the campaign calling for justice.

In regards to the growth of the campaign calling for justice, Mrs. Rajavi said, “This movement made the regime to break its three decades of silence and try to justify this massive slaughter. A number of the regime’s most disgraced murderers tried to defend the massacre. This campaign also defeated Khamenei’s major political investment in Ebrahim Raisi, a member of the Death Commission in the 1988 massacre, to become president.”

She also pointed at Rouhani’s choice of Justice Ministers. “In his first term, Hassan Rouhani appointed Mostafa Pour-Mohammadi, a member of the Death Commission in Tehran, as his Justice Minister. Now, in his second term, he has nominated as Minister of Justice another perpetrator of the massacre in Khuzistan Province. The European Union has already designated and sanctioned this man, Alireza Avaie, for being directly involved in violations of human rights.”

She also announced the publication of a new edition of the book titled, “Crime against Humanity”, which includes the names and information about the more than 5,000 PMOI martyrs and photos of hundreds of victims and their graves. She said, “Owing to the valuable year-round activities of the Resistance’s network inside Iran, in addition to the names and addresses of the graves of the victims, we also have the names of 113 members of the Death Commissions in Tehran and other provinces, nearly all of whom hold key positions in the regime. We also have the names and particulars of 213 criminals who carried out the death decrees in 35 cities as well as information about the locations of several mass graves that had been previously hidden.”

Ms. Kerry Kennedy addressed the group, saying, “You are trying to bring back to Iran a government that is based on humanity, not on suffering and oppression, but on compassion and love for one another. And in that, all the world is with you. And I am proud to stand here with you, today. We are here today because we believe in freedom and we stand in solidarity with the people of Iran. We stand against the mullahs who have caused untold terror in your beloved country… The mullahs denied the people of Iran the pride of their extraordinary heritage, a heritage admired across the globe. Iran must be free… (Iran) wrote the first human rights charter some 2500 years ago…” 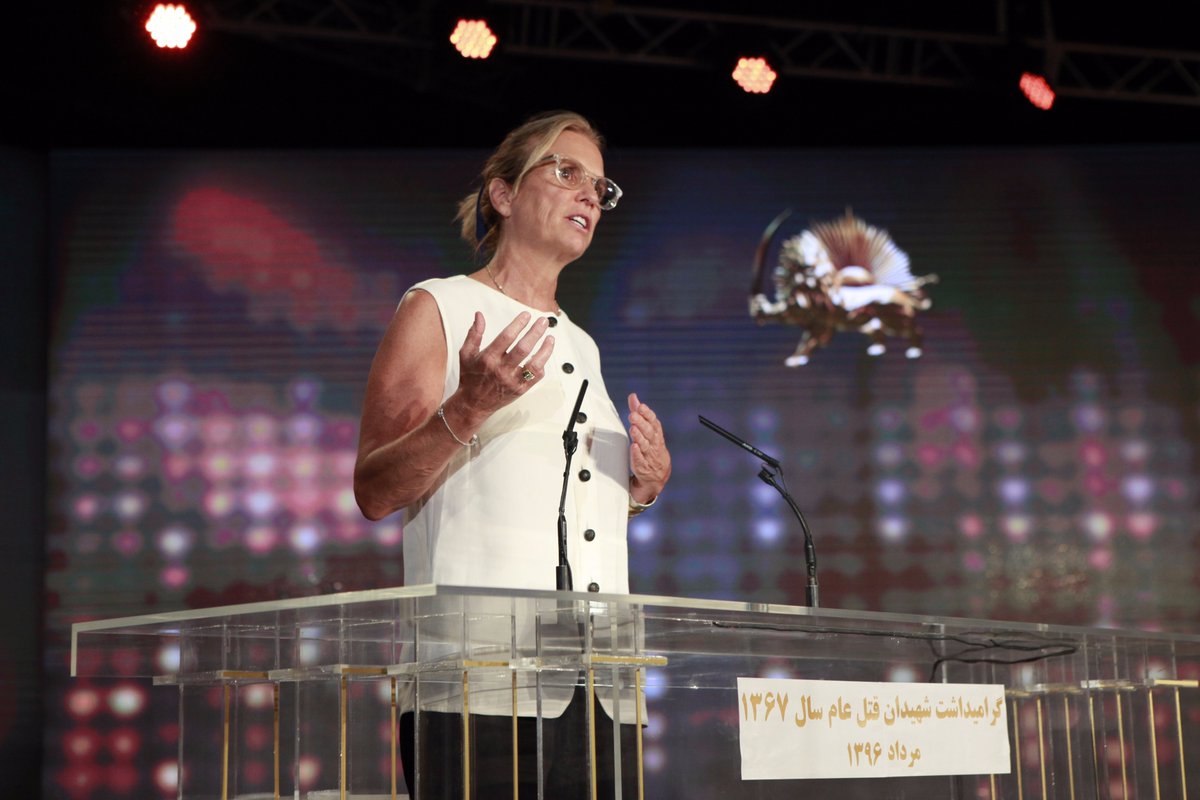 Senator Pietro Liuzzi also spoke, “The religious dictatorship ruling Iran is doing its best to destroy the PMOI and the National Council of Resistance of Iran. Over the past years, they have tried every scheme to destroy members of the Iranian Resistance. This shows very well that you are its main enemies. This is why the PMOI members’ safe relocation as an intact organization from Iraq and their settlement in Albania has been the greatest blow to the regime.” He added, “This is not a new policy or Iran. In the summer of 1988, in less than a few weeks, they executed more than 30,000 prisoners. The majority of the victims were from members and affiliates of the PMOI. This was a crime against humanity. One of the several greatest crimes in the contemporary history of mankind. None of those murderers involved in the massacre were ever prosecuted. They did not face justice. Some of the criminals are among the highest officials of the regime. I would like to thank Mrs. Maryam Rajavi for launching this call for justice campaign and for leading this great international campaign. I hope that these activities would soothe the scars of the families of these 30,000 martyrs most of who have been buried in mass graves.” 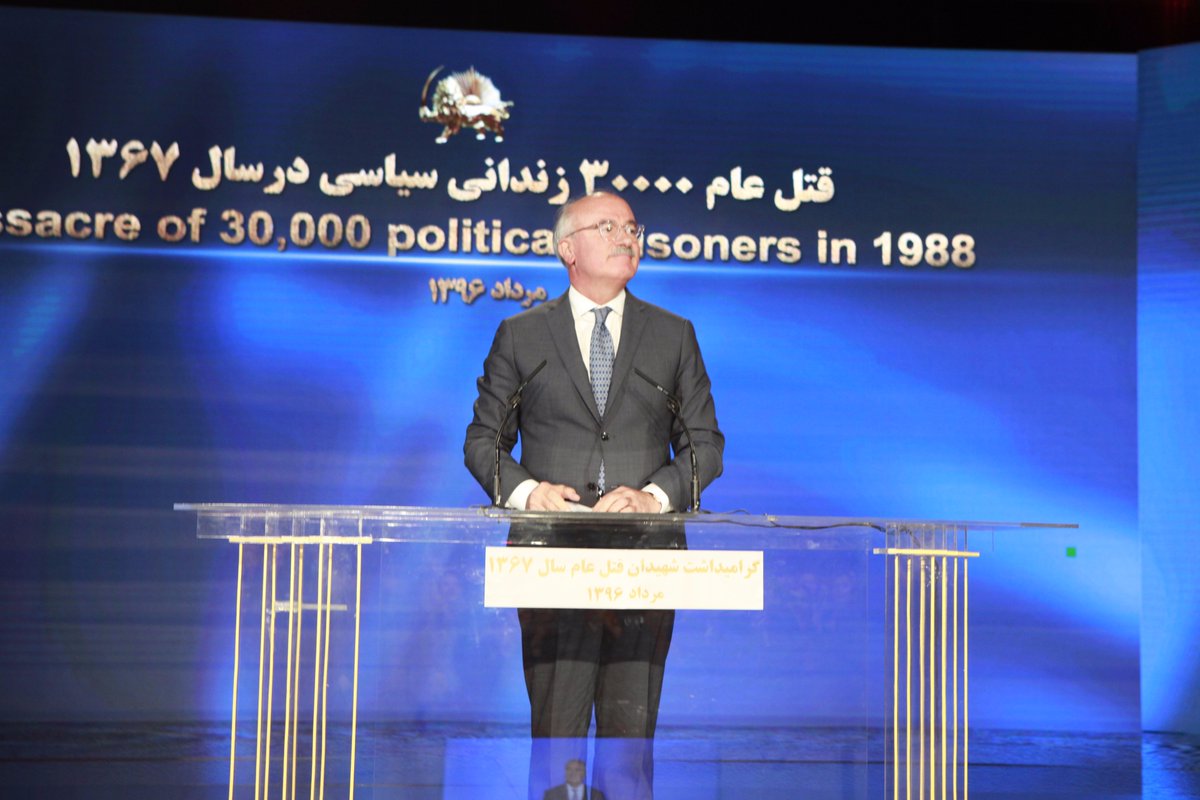 Another speaker was Mariano Rabino, who said, “Due to international pressure, Rouhani was compelled to replace Mostafa Pour-Mohammadi with Alireza Avaie, another member of the Death Committee, who was responsible for the murder of many individuals including scores who were juveniles. As previous speakers pointed out, our governments and the EU should give priority to human rights in its dealings with Iran. No realpolitik consideration or business interest should take precedent to human rights. All of us, all human rights advocates, and all those who seek freedom and democracy should urge the UN to provide a factual and documented report on the 1988 massacre. Khamenei, Rouhani and all the regime’s senior officials who were implicated in the 1988 massacre should be brought to justice before the international court in The Hague.”

He continued, “All Western governments share the blame, all of them have procrastinated. But eventually a movement has begun and things are moving. In Italy, a majority members of the parliament signed a petition in June, condemning the 1988 massacre and demanding that the masterminds and perpetrators of this massacre be brought to justice,” and added, “Scores of dictatorial regimes in contemporary history committed crimes against humanity. They enjoyed impunity for a while, but this is the time for awakening. From Nuremberg, to The Hague, to the courts pertaining to the former Yugoslavia, to the trials of crimes against humanity that took place in Africa, Asia, and in America, the dictators and criminals were eventually brought to justice. They had to face the fact findings that were pursued by the international community and by the people of those countries. Now, the time has come for the criminals in Iran.”

In her remarks, Senator Ingrid Betancourt said, “Twenty-nine years ago, Khomeini came with a fatwa that was only comparable to the final solution Hitler enacted years before during World War II. This was the starting chapter of the most cruel years in the history of the people of Iran. And 30,000 people were killed without any legal support… The very frightening part of this story is that we have all the information, all the names, all the documents, the proofs; we have the witnesses; we have the survivors, you. We have the testimonies; we even have the confessions of those who perpetrated those crimes. We have it all but we still have impunity.” Ms. Betancourt added: “In history, the wrong is only turned into good through justice. If there is no justice, the wrong is still active, the suffering is still active, the pain and the wounds are still open. Today, the criminals that perpetrated those crimes are in highest positions in the government in Iran. They are high officials of the regime… If we are silent, we become accomplice of the crime…We need to ask the UN to play its role. We need to ask the High Commissioner for Human Rights to begin an independent inquiry to investigate what we know… Khomeini is gone but those who are alive today have to go on trial in an international court; and we will not have any rest until this is achieved.” 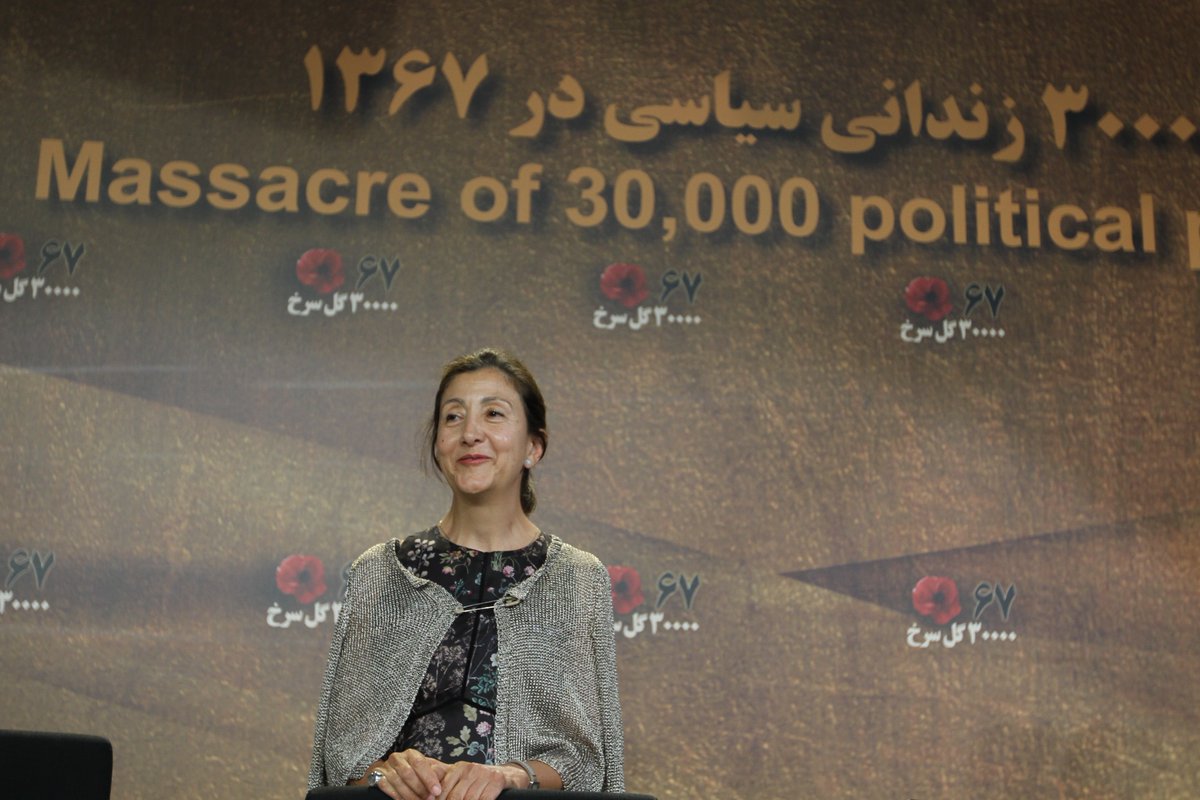 Former director of the Human Rights Office of the United Nations in Iraq, Mr. Taher Boumedra, said, “The law is on our side. We will send the fear that you used to suffer from in Camp Ashraf and Camp Liberty, the persecution you suffered from, it has to change camps, has to go to Tehran. So, those people who committed those crimes, they must now start to fear, the fear that you used to have in Ashraf and Liberty. That will start from now when the negotiation teams will travel abroad. They cannot just travel without being previously arranging their immunity. Their travel abroad with impunity will come to the end. But I do not want to forget those who were assassinated in Ashraf and in Liberty. Those assassins have to be held accountable as well. So, although our focus today is on the crimes of 1988, we must also focus on the blood that was shed in total impunity in Iraq. So, I hope that we will be able to extend our mandate JVMI (Justice for the Victims of the 1988 Massacre in Iran) to cover also the crimes committed in Ashraf and Liberty. And we also need to work very hard to bring those who committed these crimes to justice. It is feasible; it is reachable and we must do it.”

Inspiring artistic and theatrical performances were also presented in the ceremony that commemorated the 30,000 political prisoners massacred in 1988. 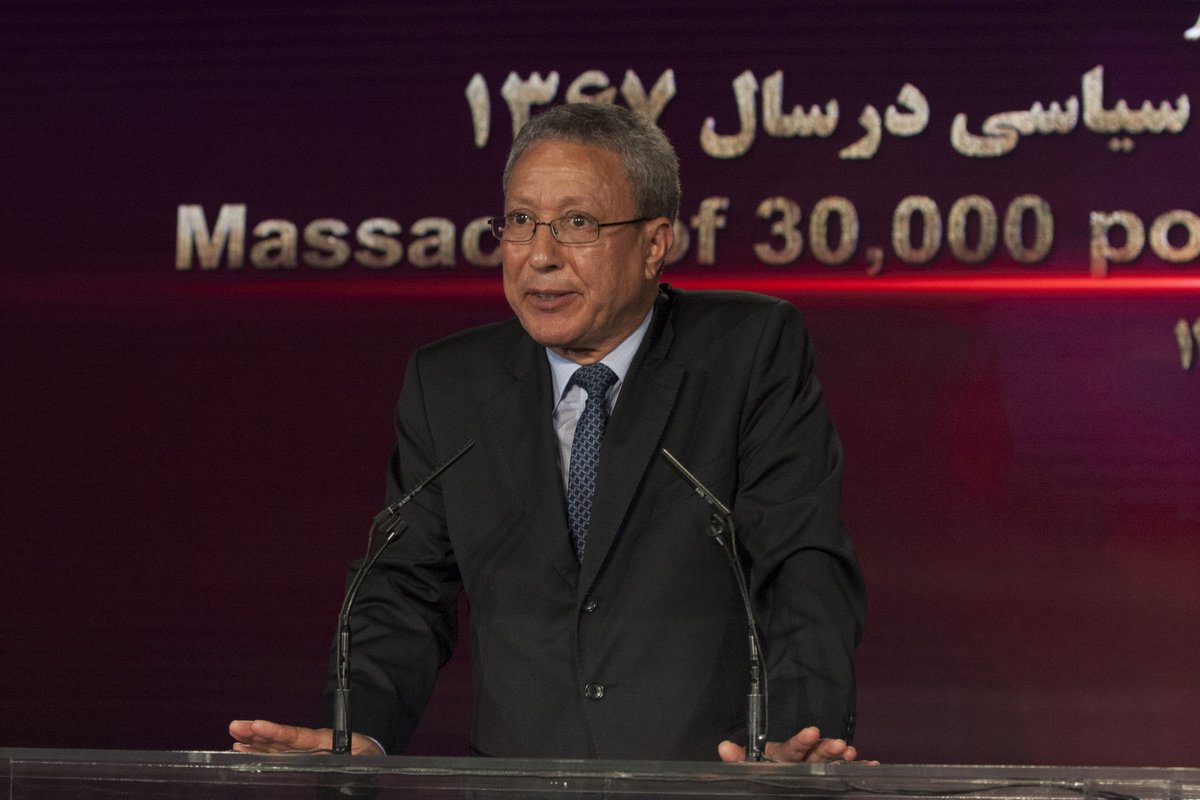