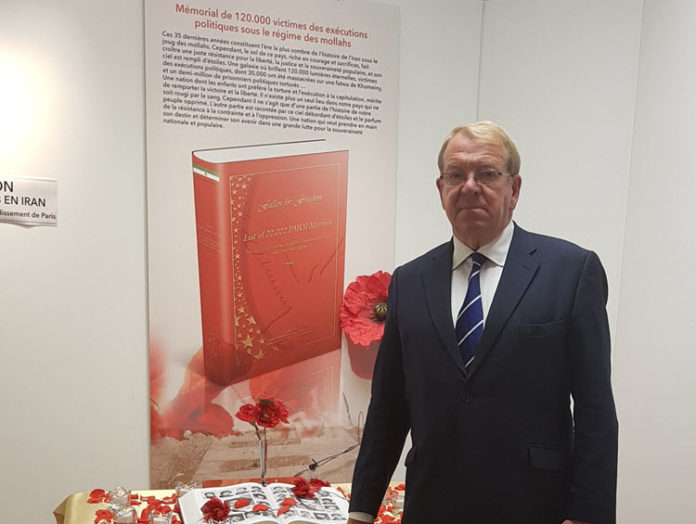 In his speech at the City Hall of the first district in the city, Stevenson called for a comprehensive United Nations inquiry into the crime against humanity in which more than 30,000 political prisoners were executed following a fatwa issued by Iran’s Supreme Leader at that time.

He thanked the mayor of the district for the organisation of the exhibition which he called a “magnificent event” for the memory of the victims of the massacre. He said that it serves as a reminder to politicians in Europe that the human rights issue is a universal value that should not be ignored, forgotten or compromised at the expense of economic interests.

Stevenson mentioned the EU High Representative for Foreign Affairs, Frederica Mogherini’s, visit to Iran for the inauguration of President Hassan Rouhani after he was re-elected for his second term. He said that the visit “stunned the world” because Rouhani took the country to the top of the list for the highest number of executions per capita.

He pointed out that Rouhani, described by the West as “moderate” is responsible for the execution of more than three thousand people during his first term, 80 of whom were women. He added: “Three days before Mogherini arrived in Tehran, Amnesty international published a 94-page report highlighting the ‘web of oppression’ that pervades Iran and detailing the catastrophic human rights situation in the country.”

Stevenson also spoke about the unjust imprisonment of opponents of the regime and mentioned the case of Maryam Akbari Monfared who was thrown in jail in 2009. He emphasized that the Iranian authorities make up false charges and torture prisoners into confessing to crimes they did not commit. Trails are also a farce in Iran and people are not given due process or access to the lawyer of their choice.

Speaking about the 1988 massacre, Stevenson highlighted that members of the so-called “Death Commission” who were appointed to oversee the executions have held high positions in the government since. He said: “The ‘Death Commission’ included Mostafa Pour-Mohammadi, who until earlier this month was Rouhani’s Justice Minister. As the scandal of the 1988 massacre deepened, Rouhani removed Pour-Mohammadi from this role and brazenly replaced him with another notorious murderer Alireza Avaie. Avaie, now the new minister of justice, served as public prosecutor in 1988 in the city of Dezful in Iran’s Khuzestan Province. Based on eyewitness reports provided by various former prisoners, Avaie ordered juvenile detainees under the age of 18, including girls, to be executed in groups of two or three.”

He said that the 1988 massacre was one of the most shocking crimes of the century and called for justice for the victims. He urged the French government to make human rights a priority when dealing with Iran.

“We expect President Macron to insist on a halt to executions and clear progress on human rights in Iran. The French government and the EU should also be demanding a full United Nations inquiry into the 1988 massacre, with Khamenei, Rouhani and their claque of killer clerics indicted for crimes against humanity and brought for trial before the international courts in The Hague.”