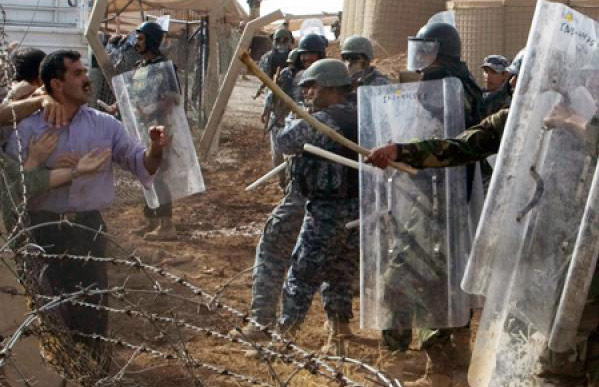 The other global U.S. foreign policy mistake was the deal struck between the Obama administration and the Iranian regime based on the idea that engagement would moderate the Ayatollahs’ grand designs. But as one can clearly see, all Khomeinist promises have been evaporating as their military and militant machines grow by the day—despite the so-called “interim nuclear deal.” In short, Tehran has been outmaneuvering the West, particularly the United States, in regards to its long term strategic goals. And this is not a new phenomenon. Iran has been practicing this astute deception for years, particularly since 9/11 and the subsequent invasion of Iraq. As we look back at the major triumphs for the Khomeinist regime over the past decade, it is painfully apparent that the single most dangerous move by Tehran’s services and supporters has been implemented inside Iraq and, unfortunately, right in front of the Americans’ eyes.

As is true for all totalitarians in history, the Iranian regime’s greatest fear comes from any potential opposition that is able to mobilize the masses and organize them, demonstrating a capability to shake the very foundation of the regime. For decades, the Khomeinists have clearly exhibited a zero-tolerance for any form of meaningful opposition and have successfully rebuffed any serious challenges to their regime. Since the implementation of the Islamic Republic, thousands of citizens have been executed and tortured. The arm of the regime went so far as to assassinate political opponents in foreign countries—with no regard for international law. In 1999, the regime clamped down on a widespread student revolt on campuses. Such suppression of demonstrations continued relentlessly over two more decades, culminating in the crushing of the June 2009 popular revolt.

The most dangerous of all known oppositions to the regime, however, has undoubtedly been the exiled Iranian community and its organized forces in Iraq. Since year one of the Khomeinist takeover in Tehran, thousands of citizens—mostly members of the revolutionary group “Mujahidin Khalq” (known also as the MEK)—flocked to neighboring Iraq as they fled the bloody repression in Iran. Naturally, the Saddam regime—at war with Khomeini—gave them safe haven and allowed them to stay. The notion of “Saddam protection” was used by the Iranian propaganda machine to tarnish the group’s legitimacy. The latter, stuck in Iraq, had two options: leave Iraqi exile and lose the only strategic territory contiguous to Iran from where they could reach out to their people—or run the risk of being painted as Saddam’s protégés. Their choice was to weather Iraq’s regime and create a base from which to launch their return. That base was called Camp Ashraf.

Iran’s regime used all possible tactics to harm the exiles, but the fall of Saddam finally gave them an opportunity to move directly into Iraq. Under the Bush administration, U.S. protection of the Iranian exiles was fair, generating years of MEK assistance in intelligence and counterterrorism. The exiles, considering themselves as allies of the Americans facing al Qaeda and Tehran’s militias, advised U.S. forces on an array of defense and human rights related issues. Washington’s partnership with the Ashraf community, however, made one mistake between 2003 and 2009: it did not build a serious strategic alliance that could have enabled the Iraq-based Iranian opposition to grow to a point where it could have mobilized the masses inside Iran with full backing of the U.S. and the Coalition. Seven years of properly engineered Western support to the exiles could have generated a massive geopolitical challenge to Iran’s regime and, by ripple effect, to its nuclear menace.

In 2009, the Obama administration changed course with Iran. In June of that year, President Obama sent a letter of engagement to Grand Ayatollah Khamenei. That same month, the U.S. president signaled his administration would not side with the demonstrators in Tehran and other Iranian cities. U.S. policy regarding the Iranian opposition has also changed since. Funds which had been authorized to Iranian dissidents by the previous administration were cut off. Ashraf was abandoned, leaving MEK vulnerable to attack by pro-Iranian security elements, as of 2009, even under the watchful eyes of the U.S. military. All signs indicated that the Obama administration had agreed to abandon the exiles in return for Tehran’s willingness to engage politically. The opposition group, attacked again in 2011, was relocated from Ashraf to another site farther from the borders, known as Camp Liberty in 2012. But the harassment by the Baghdad-led pro-Iranian authorities escalated as Tehran refused to tolerate any presence of freedom activists in the country just over their border. Though MEK was removed from old U.S. and European terror lists, which had handicapped the resistance group, Iran’s offensive against them proves that Washington’s abandonment of this organized force in Iraq is turning into a victory for the Ayatollahs. Free from an active challenge to their power, whether it be inside or outside the borders, the Iranian regime is now concentrating on consolidating its domination in Iraq—and from that country, its influence in Syria and Lebanon. Washington’s strategic error is enormous…it would be the equivalent of the British removing General De Gaulle and his Free French Forces from England while Hitler was preparing for his onslaught.

Dr Walid Phares is the author of The Lost Spring: US Policy in the Middle East and Catastrophes to Avoid. He advises lawmakers on both sides of the Atlantic