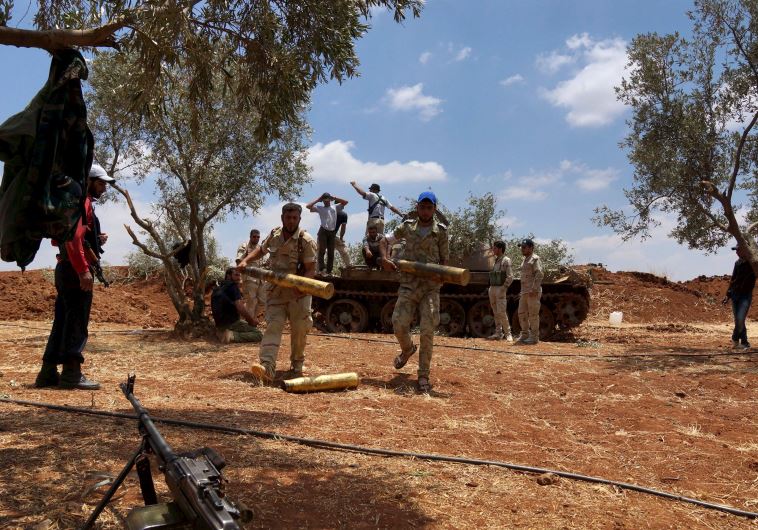 Iran and Russia have both deepened their involvement in Syria with the principle aim of defending the dictatorship of Bashar al-Assad. The four-party coalition, which is competing for influence with a US-led coalition whose activities are mainly confined to bombing raids, has sought to characterize itself as another anti-ISIS coalition, but moderate and pro-democratic insurgents in Syria have alleged that recent Russian strikes have tended to aim at them more than they have aimed at ISIS.

Iran has explicitly expressed support for the growing Russian involvement, which has been blamed for numerous civilian deaths and has helped to precipitate a call for yet another multinational coalition specifically aimed at curtailing Russian and Iranian influence in the region. The Jerusalem Post reported on Monday that some 40 Syrian insurgent groups including the Free Syrian Army had jointly issued this call, alleging “blatant occupation of the country” by a Russian-Iranian alliance.

While this alliance poses a direct threat to anti-Assad forces in Syria, it also reflects broader collaboration between the two nations, which could have consequences for Western interests and regional stability.

Over the weekend, Iran claimed that it had begun to receive delivery of advanced S-300 missiles from Moscow, fulfilling a long-delayed weapons transfer that could complicate any future airstrikes on Iran, especially coming from Israel. It is expected that this transaction will set the stage for more such transfers, but it may also reflect illicit sales that have already taken place at times when Western nations were fully enforcing arms embargoes on the Islamic Republic.

That enforcement reportedly diminished during the course of nuclear negotiations between Iran and the West, possibly allowing for more weapons to slip into the country and contribute to an arsenal that has apparently already been expanded with the help of Asian partners. On Tuesday, IHS Jane’s reported that images recently released by Iran of one of its high-speed rocket torpedoes confirm that the design is identical to that of a Soviet-developed weapon, strongly suggesting that the technology was obtained from partners in Moscow.

Jane’s also points out that the incriminating images were exhibited by the Iranian Revolutionary Guard Corps alongside images of a semi-submersible torpedo boat, which showcased technological advances since Iran’s first semi-submersibles were obtained from the North Korean regime in 2002.

Iran’s foreign partnerships lead directly to improvements in its domestic military, and these improvements have been repeatedly used by Iranian hardliners and military officers to threaten the United States and other Western powers. Brigadier General Amir Ali Hajizadeh said over the weekend that all US military bases in the Middle East were in range of Iranian missiles, and on Tuesday the Iranian parliament reportedly formalized its demands that Iran’s development of its missile stockpiles will not diminish in any measure in the wake of the nuclear agreement between Iran and the P5+1 group of nations.

But the threat of stronger weapons in Iranian hands leads directly to the threat of those weapons reaching the hands of Iran’s foreign proxies, chiefly Hezbollah. Alongside Iran and Russia, the Lebanese terrorist organization has established a firm position in Syria and has reportedly obtained more advanced missiles, many of which are aimed at Israel. The Times of Israel reported on this development on Monday and followed up on Tuesday by observing that Iranian foreign ministry spokesperson Marziyeh Afkham had warned of “repercussions” to Israel following recent clashes with Palestinians.

The persistence of these threats and the increase in Iranian armament have encouraged the Israeli government to continue pushing a hard line against Western rapprochement with Iran. Nevertheless, the Obama administration and others continue to hold out hope that Iran may cooperate in good faith to bring an equitable solution to regional crises. Indeed, Obama himself has said that he is prepared to talk with both Russia and Iran about a political solution to the Syrian Civil War, although he also emphasized that a return to the “status quo” under Assad would be unacceptable.

This desire for cooperation evidently goes well beyond the Obama administration, as Agence France-Presse reported on Tuesday that United Nations Director General Ban Ki-Moon met with Iranian Foreign Minister Mohammad Javad Zarif and urged Tehran to help resolve a more than year-long power vacuum in Lebanon, where factional rivalries have prevented the election of a new president.

Whereas Ban and some other leaders may think that Tehran can play a productive role there under current conditions, critics of the regime feel that today as in prior years, any Iranian influence in Lebanon would give precedence to Hezbollah, which often acts contrary to the official government, yet remains too strong to face consequences for doing so.

Though critics believe that Western leaders’ recent attempts to reach out to Tehran have been misguided, those attempts apparently extend even into the nuclear sphere, at least according to a speech delivered last week by Argentine President Cristina Fernandez de Kirchner at the UN General Assembly. De Kirchner claimed that the Obama administration came to her government in 2010 and asked Argentina to provide nuclear fuel to Iran. An editorial published Monday by Examiner cites this speech as further fuel for growing questions about why the Obama administration “has taken the stance to support the world’s greatest sponsor of [Islamic] terrorism,” thereby potentially contributing to its expansion of influence throughout Asia and the Middle East.