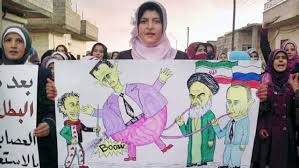 Numerous reports during the past two weeks have indicated that Iran’s presence on the battlefields of the Syrian Civil War has been growing, especially under the cover of Russian air support. Furthermore, it has been reported that the Iranian Revolutionary Guard Quds Force commander Qassem Suleimani was instrumental in securing that Russian involvement, which has also led to the establishment of an intelligence-sharing apparatus for Iran, Russia, Syria, and Iraq.

Iranian officials have by and large persisted in downplaying the Iranian role and have stayed true to talking points about the Revolutionary Guards serving only as advisors. But the Iranian paramilitary organization has seen at least four deaths this month alone, suggesting a greater overall presence in combat. Iran has also been credited with leading the National Defense Force that is fighting alongside the Syrian Army. The NDF has reportedly played the larger role in recent major offensives, according to a report by the Wall Street Journal.

The same report indicates, however, that the apparent growth of Iranian involvement in Syria and the broader Middle East may actually threaten the long-term stability of the Iran-Russia alliance. Thus far, that alliance has only grown in the midst of the Syrian crisis, owing to overlapping interests for the two countries. But these interests may not overlap forever.

Indeed, previous reports have suggested that Russia’s commitment to the Assad regime is more malleable than Iran’s. That is, Russia may foresee a different Syrian leadership that nonetheless preserves strategically valuable Russian military bases in the country. On the other hand, any replacement for Iran would likely be Sunni and thus pose a threat to Iran’s Shiite influence in its neighbor.

The Wall Street Journal states that Russia’s long term policies do not benefit from an increase in sectarianism in the Middle East. If Moscow is seen as promoting such sectarianism, it may spill over into the large Sunni populations in Russia, some of which have been prone to revolt and separatism in the past. By contrast, sectarianism is ultimately beneficial to Tehran’s regional and global reach, as it is vying with its Sunni neighbors for the role of global leader of Islam.

On Thursday, the Christian Science Monitor raised similar questions about the durability of the Russian-Iranian partnership in the midst of pro-sectarian policies in Syria. These policies include the promotion of Hezbollah within the war-torn country, which has helped the Lebanese Shiite terrorist group to establish what is likely meant to be a permanent base of operation in the Golan Heights. At the same time that Iran and Russia are coordinating on a major offensive in the north of Syria, Iran and Hezbollah are separately leading a smaller offensive to shore up their position in the province of Quneitra, near the border with Israel.

According to the Monitor, “The operation could cast light on whether Russia and Iran… have agendas that coincide or diverge. It also has the potential to test how far Russia is willing to extend its air power in the country.”

The possibility of divergent agendas may shed some light on the motives for Abdollahian’s statement about Iran’s current agenda not being “forever.” That is, Tehran may be attempting to further secure its alliance with Moscow by giving the impression that its own vision of the endgame for the Syrian Civil War could change alongside Russia’s. As long as Moscow believes that it and Iran will be able to find a mutually beneficial political solution for the conflict, it is more likely to continue offering air support to Iran’s efforts.

But even if Abdollahian’s remarks prove false in time, the end result will not be the only factor in Iranian-Russian relations. The alliance between the two countries may face some threat in Syria and yet remain strong in general, purely on the basis of financial interests.

Both countries have boasted of their developing relations in that domain. Forex Report Daily indicated on Thursday that Russian Energy Minister Alexander Novak had been visiting with Iranian officials to discuss plans for joint projects valued at 25 billion dollars. The Iranian propaganda outlet Press TV reported that the two countries had signed an agreement to this effect, outlining 121 projects including joint banking infrastructure and collaboration in the areas of transportation, oil, and urban development.