Iran’s terrorism and assassinations of its political opponents

Iran’s regime has not only oppressed its opponents inside Iran but has carried out dozens of terrorist plots abroad against them, particularly in Europe. The most recent example was a failed bombing plot in Paris, France, in 2018 against the annual “Free Iran” gathering of the National Council of Resistance of Iran, NCRI. The attack was planned by the diplomats of the regime in Europe.

The regime’s embassies in Europe, are proven to be centers of terrorism and espionage and have played a key role in Iran’s assassinations.

On April 24, 1990, in Geneva, several agents of the Ministry of Intelligence and Security of Iran murdered in broad daylight, Prof. Kazem Rajavi, the representative of the NCRI in Switzerland.

Rajavi’s assassination required enormous resources, extensive planning, and coordination among several of the regime’s organizations. After thorough investigations, Roland Chatelaine, the Swiss magistrate in charge of the case, and Swiss judicial and police officials confirmed the role of Iran’s government under Ali Akbar Hashemi Rafsanjani, then-president of the regime, and the participation of thirteen official agents of the Iranian regime who had used “service passports” to enter Switzerland for their plot.

A partial list of terrorist attacks conducted by the Iranian regime abroad include the following: 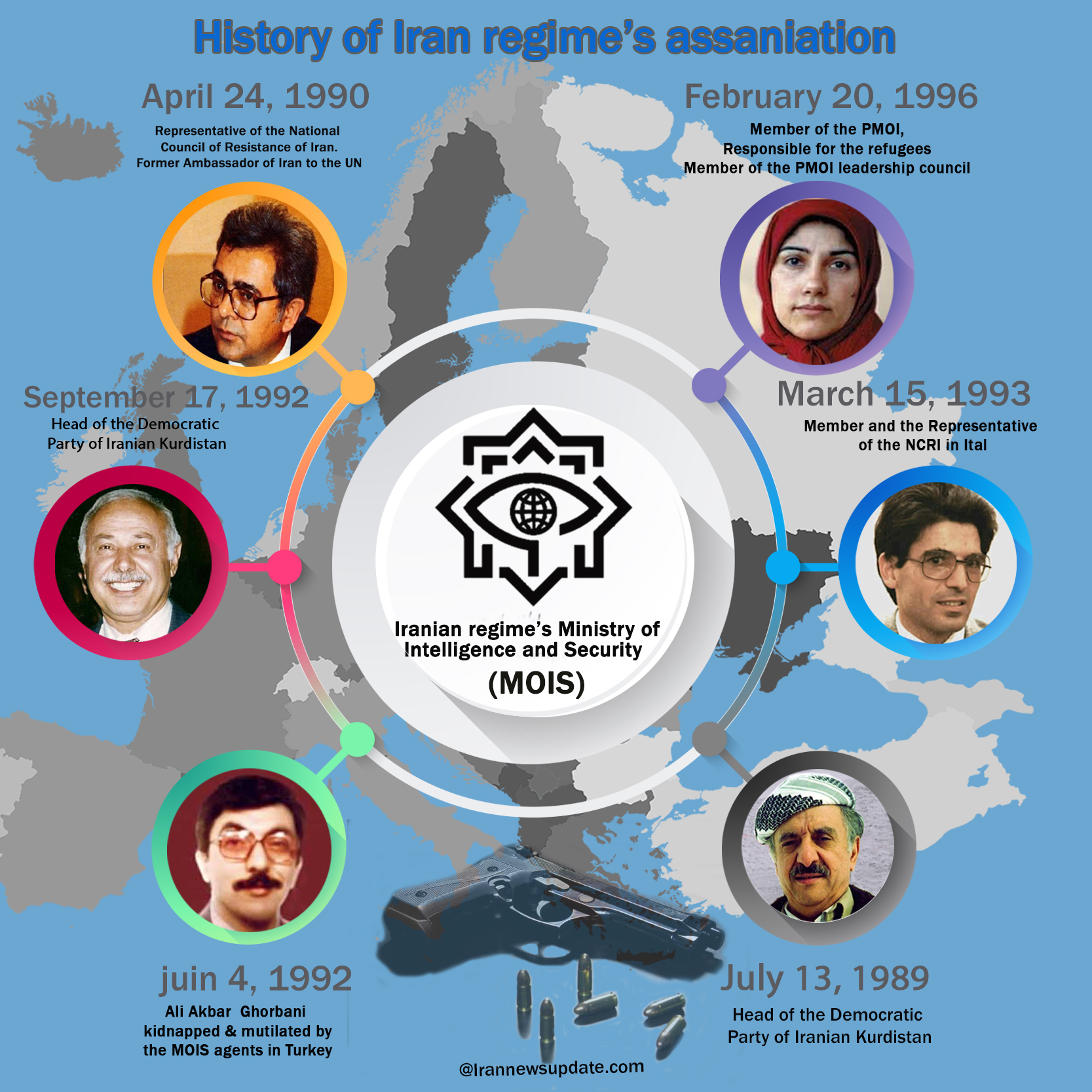 Iran’s use of terrorism as a blackmailing tool

the Iranian regime has a long history of attempting to carry out terrorist operations in foreign countries for putting pressure on the western governments to pursue the policy of appeasement.

An example is the bombing of the barracks of U.S. Marines in Beirut, Lebanon, in 1983 which was conducted by the Revolutionary Guards Corps, IRGC.

Four years later, on July 20, 1987, Mohsen Rafiqdoust, the former IRGC Minister, officially stated, “Americans know that the explosive that combined with that ideology and sent 400 American soldiers and officers to hell, both the ideology and the explosive material came from Iran.”

to the long list of regime’s terrorist activities, we could add: The Khobar towers in Saudi Arabia in the mid-90s, and the Jewish community in Argentina in 1994.

Iran’s regime also takes foreign nationals as hostages and uses them as bargaining chips to put pressure on their countries of origin. This practice continues to this day.

What is the solution?

After reviewing Iran’s regime history of terrorism, it becomes clear that this regime will continue its terrorism, unless firmly confronted.

But the main question is: Does terrorism show the Iranian regime’s strength or is a sign of weakness? It is clear that a popular, pluralistic and well-established government never seeks terrorism or destabilizing other countries. The actions of Iran’s regime are desperate moves to export its internal problems abroad and continue is blackmailing campaign.

The solution lies in standing firm against the Iranian regime’s state-sponsored terrorism.