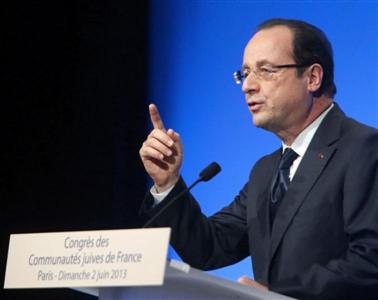 “This is not just Israel that is threatened, it is the whole region that will be in disorder with the possibility of Iran obtaining the nuclear weapon,” emphasized President Hollande at the 2nd Jewish Community Congress in France.

“Additionally, this is not just the Middle East that will see its security undermined. In fact, it will be Europe itself that will find itself finally being the target of the existence of these weapons,” he added.

The President stipulated when he visits the Middle East “in the upcoming months”, he will have this “opportunity to meet with regional officials” and especially Israeli Prime Minister Benjamin Netanyahu.

The international community is suspicious of the Islamic Republic of Iran of being on the verge of obtaining nuclear weapons under the guise of a civilian program, something Tehran firmly denies. The UN and the West have imposed a collection of sanctions against Iran.

Mentioning Syria and Hezbollah that support the Damascus regime, President Holland reiterated France “had requested the name of the military wing (Hezbollah) be placed on the EU list of terrorist organizations.”

The “difficult decision” made by the EU to lift its sanctions for the good of the Syrian opposition, must be “implemented with much precision, if we not say very specifically” regarding the destination of the weapons that can be delivered.

Francoise Hollande stressed this means we “must be certain the Syrian opposition is completely aware of its responsibility”, referring to the threat of these weapons falling into the hands of radical Islamist groups.