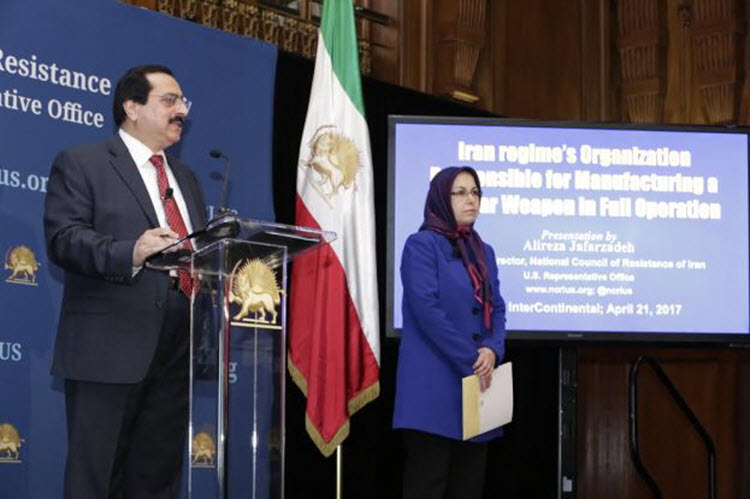 The officials who spoke to the cover up include Hossein Dehghan, Defense Minister, Abbas Araghchi, deputy Foreign Minister, who served as point man on nuclear negotiations team, and Mohsen Rezai, former commander of the Iranian Revolutionary Guards and the secretary of the Expediency Council.

On April 21, at a press conference in Washington, D.C., the Iranian Resistance disclosed that there is a new, secret facility associated with nuclear project in Plan 6 at Parchin military site.

Defense Minister and IRGC Brigadier General, Hossein Dehghan, said on April 23, “Certainly, this sinister plot of Mojahedin will fail and the conscious and revolutionary people of Iran has never accepted and will never accept humiliation and threats, and in line with playing its regional and global role and strengthening self-defense and deterrence will not rest for a moment.”

On April 22, Araghchi, the regime’s main negotiator for the nuclear deal, said that “the IAEA Director General’s visit to Parchin and his report on the lack of possible military dimensions to Iran’s nuclear program led to the closure of the fake file of PMD and caused a scandal for its claimants.”

“The Americans would better not go down with Mojahedin rotten rope … No new measure has taken place in Parchin and past measures to build war equipment and to strengthen defense capability go on,” said Abolfazl Hassan Beigi, vice chairman of the Committee of Defense and Foreign Affairs.

Amid all of these statements, no one has invited the IAEA inspectors to visit the newly disclosed site.

A report in December, 2015 stressed, “The Agency’s overall assessment is that a range of activities relevant to the development of a nuclear explosive device were conducted in Iran prior to the end of 2003 as a coordinated effort, and some activities took place after 2003.”

The IAEA inspectors must do an unrestricted inspection of the new site in Parchin, stresses the Iranian Resistance, and the sites related to SPND, as well. Interviews with key individuals of the nuclear bomb making program must be accomplished. A delay will only allow further secretive work, and provide time for the elimination of evidence.