INU – Yesterday, the U.S. House Committee on Foreign Affairs examined the interim nuclear agreement that the U.S. and P5+1 reached with Iran last month.  U.S. Secretary of State John Kerry was present for the meeting and helped address the Committee’s questions and concerns.

Chairman of the committee Rep. Edward Royce began the discussion with opening remarks reminding Sec. Kerry that “Congress has played a critical role in U.S. policy towards Iran, mainly by driving sanctions against the regime, including the Royce-Engel bill which passed the house by a vote of 400-20 this past summer.” 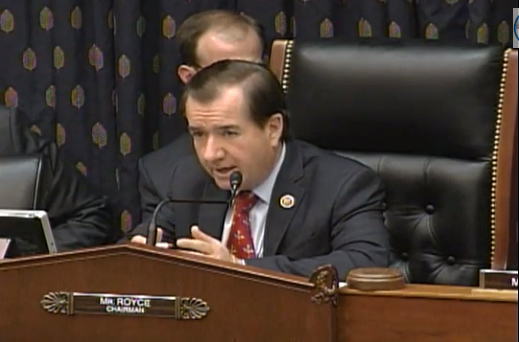 Royce continued with, “The key issue is whether a final agreement would allow Iran to manufacture nuclear fuel.  Unfortunately, the interim agreement reads “yes,” it will. My concern is that we have bargained away our fundamental position, which is enshrined in six U.N. Security Council Resolutions — that Iran should not be enriching and reprocessing — in exchange for a false confidence that we can effectively check Iran’s misuse of these key nuclear bomb-making technologies.  Just within the last few days, Iran has announced plans to press on and improve its centrifuge technology to enrich uranium.  Meanwhile, days after the agreement, its Foreign Minister stated that Iran will continue construction at the Arak reactor, which will be capable of producing weapon-grade plutonium once operational.  What does this say about Iran’s intentions?”

Chairman Royce was not alone in is expression of extreme concern regarding the nuclear agreement.  Rep Engel called this issue of “paramount importance of American national security” and “that at a minimum Iran should be required to suspend uranium enrichment that is demanded by six separate UN Security Council resolutions.”

Sec. Kerry reiterated that both he and President Obama are “very clear that Iran must not acquire a nuclear weapon and it is the centerpiece of the President’s foreign policy.”  Sec. Kerry claimed that “the national security of the United States is stronger under this first step agreement than it was before. Israel’s national security is stronger than it was the day before we entered into this agreement and gulf and Middle East’s interests are more secure than the day before we entered this agreement.”

Despite Sec. Kerry’s rhetoric, members of the committee simply weren’t buying it and were not going to let him off without serious questioning and speculation. Possibly, the strongest comment remark from Rep. Ros-Lentinen saying “a bad deal is worse than no deal, well this deal is a bad deal! I believe the concessions offered to Iran will be the death nail on the sanctions program as we know it.  It threatens our allies; it threatens our closest ally, the democratic Jewish state of Israel.”

The nearly three hour session came to a close where it seemed like both parties would have to agree to disagree.  Sec. Kerry was reminded by Chairman Royce that Iran is a “blatant and aggressive supporter for terrorism, where chants of ‘Dead to America’ are commonly heard at rallies throughout the country.  Additionally, Iran is a supporter of Hezbollah and has a history of deceiving the international community.”