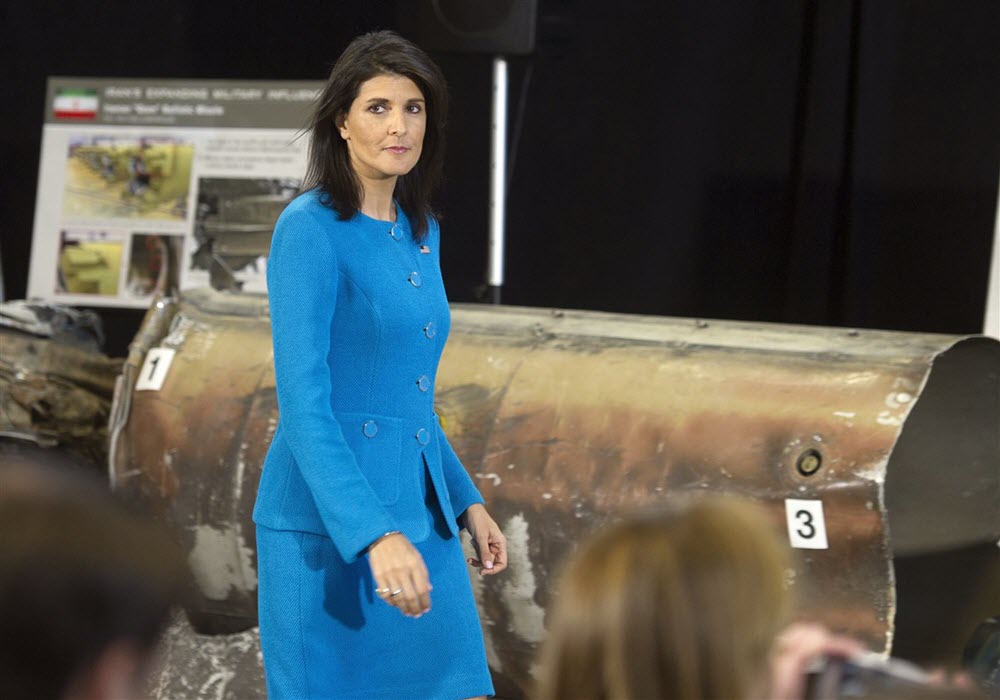 The equipment was deemed relevant to the November 4 missile launch by the Iran-backed Houthi rebels in Yemen. On that occasion, the weapon was shot down over King Khaled International Airport, outside of the Saudi Arabian capital of Riyadh. As such, it represented the deepest penetration into Saudi territory by the Houthi – a feat that was beyond the reach of Yemeni missiles prior to the outbreak of civil war in 2015. Many experts concluded that this expansion in the Yemeni missile range could only have been accomplished either by directly adopting Iranian weapons or by using Iranian know-how and equipment to upgrade existing arsenals.

Another Houthi strike, on July 22, targeted the Saudi town of Yanbu, and this missile was reportedly put on display at Haley’s presentation in Washington near the Defensive Intelligence Agency. The previous day, United Nations Secretary General Antonio Guterres presented the latest report on the implementation of the 2015 nuclear agreement between Iran and six world powers. According to the Los Angeles Times, Guterres specifically addressed both the July and November missile strikes, acknowledging that the UN was looking into the possibility that these attacks involved weapons provided by Iran.

Such an action by the Islamic Republic would constitute a violation of UN Security Council Resolution 2231, which was passed to mark implementation of the nuclear deal, formally known as the Joint Comprehensive Plan of Action. The resolution is technically separate from the JCPOA and includes some provisions that were left out of the nuclear deal over the objections of many critics of the Islamic Republic.

Apart reiterating bans on weapons transfers, Resolution 2231 calls upon the Iranians to avoid work on weapons that are designed to be capable of carrying nuclear warheads. However, the language of this provision has left room for debate about its reach, and so Tehran has carried out more than a dozen tests of nuclear-capable ballistic missiles. The Trump administration has long maintained that these tests, alongside other provocative moves by the Iranian regime, constitute violations of the “spirit” of the JCPOA. These issues were accordingly cited when the US president withheld certification of Iran’s compliance with the JCPOA.

The international community has resisted this line, and the UN’s latest report once again declares that Iran is living up to its defined obligations under the nuclear deal. However, the LA Times indicates that Guterres recognized that Iran may be flouting its international responsibilities in other areas. This is arguably a sign of progress in the White House’s outreach to the world community, especially coming as it did before Haley gave her presentation at Joint Base Anacostia-Bolling on Thursday.

In that presentation, the ambassador specifically said that the US was working to “build a coalition to really push back against Iran and what they’re doing.” And what they are doing, according to Haley, entails ongoing escalation of provocative and destabilizing activities that were already unacceptable before the JCPOA’s implementation and the outbreak of the Yemeni Civil War. “Its ballistic missiles and advanced weapons are turning up in war zones across the region,” she said, as reported by NBC News. She later added, “The undeniable fact is that that the Iranian behavior is growing worse.”

Predictably, Iranian officials rejected the UN ambassador’s assessment and the declassified intelligence underlying them. Despite the display of equipment at Haley’s presentation, Gholamali Khoshroo, Iran’s own ambassador to the UN described the US as peddling “baseless accusations”, in a statement that was published on the website of the Islamic Republic News Agency. In discussing the November missile strike in particular, Khoshroo called accounts of Iranian involvement “unfounded and, at the same time, irresponsible, provocative and destructive.”

In this way, the Islamic Republic is evidently working to build this week’s developments into its generalized anti-American rhetoric. In portraying the US as inherently belligerent, the Iranians have sought to broaden the gulf between current American and European policies toward the Islamic Republic. Under President Trump, the US has apparently begun to look for ways to extricate itself from the JCPOA, or to strengthen that agreement. European partners, on the other hand, remain overwhelmingly committed to it.

But until recently, this commitment has seemingly coincided with European reluctance to put pressure on Iran over other issues when that pressure might have carried a risk of encouraging Iran to walk away from the nuclear deal. Many observers have suggested that this dynamic is shifting, perhaps because of efforts by the White House to publicize instances of Iranian misbehavior and perhaps simply because that misbehavior has continued throughout the nearly two years since the JCPOA was implemented.

On Thursday, Forbes published an editorial that touched upon this notion. “Following the recent missile launch from Yemen targeting Riyadh, and evidence showing the missile being of Iranian origin,” it explained, “France and other European countries have voiced positions far different from their stereotype calls for engagement with Tehran.”

This is made arguably more significant by the fact that those revised positions, like the Guterres report, began to emerge before the US presented the full range of explicit evidence for Iran’s provision of missiles to the Houthi and others. In a segment of Andrea Mitchell Reports, MSNBC declared that Western governments in general had been aware of these Iranian activities for a long time, but that Haley’s presentation took the significant step of making them “more concrete”.

Analyst Jeremy Bash even went as far as to say that the event highlighted the idea that the US is already engaged in a “proxy war” with Iran, and that it promised to serve as the precursor to a year in which tensions with the Islamic Republic would escalate even further. If this turns out to be true, crucial questions will revolve around the extent of European involvement in that situation. MSNBC also indicated that Haley’s presentation was clearly part of an ongoing effort to build international consensus on Iran policy among UN member states and particularly the European countries that have sought to benefit from the implementation and preservation of the JCPOA.

Whatever the answer to those questions may be, it is presently clear that the Europeans have a long way to go to catch up to American assertiveness in this area, even if they have already begun trending in that direction. Forbes points out that President Trump is scheduled to outline his National Security Strategy in the coming week, at which point he will likely formalize a plan to confront and counteract Iranian influence in the broader Middle East. This should give a clearer indication of both where the US stands and exactly what changes it will seek to promote in European policy.

One probable aspect of the emerging US strategy will be to create international backing for new sanctions that would put pressure on Iran without directly undermining the JCPOA. This is already something that some members of Congress are pursuing, as the National Council of Resistance of Iran reported on Tuesday. The Iranian opposition group notes that two Republican representatives, Ileana Ros-Lehtinen of Florida and Ted Poe of Texas, have introduced a bill that would sanctions Iran for its support of the Houthi in Yemen. Two other sanctions bills were previously introduced which sought to address Iran’s ballistic missile program and its potential purchase of commercial aircraft from the West.

By specifically targeting Iranian influence in Yemen, the latest proposed measure could help to advance a broader strategy that was recommended by the above-mentioned Forbes editorial. That article speculates that recent Iranian setbacks in Yemen could lead to more of the same throughout the region. “In fact,” the article concludes, “a strong stance in Yemen and liberating this country from the Houthis should be used as a launching pad by the international community to begin reigning in Iran’s expansionist policy across the Middle East.”

The recent focus on Houthi missiles may suggest that the White House sees the situation in a similar light and is now making a concerted effort to develop international backing for a strategy that will undercut the Iranian support network for the Yemeni rebels.