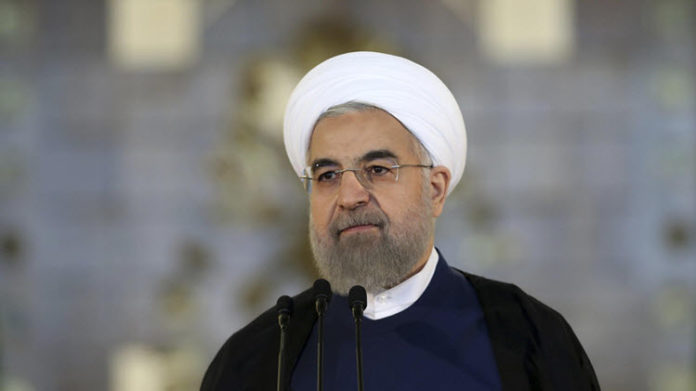 In a speech to students at Tehran University, Rouhani said, ”America… is our enemy, we have no doubt about this. The Americans want to put as much pressure on us as they can.”

The Iran Sanctions Act passed the US Senate 99-0 last week, after easily clearing the House of Representatives in November.

A White House official said that President Barack Obama is expected to sign the measure into a law, adding that the e the extension does not violate last year’s nuclear deal between major powers and Iran.  But Iran says that, “If this is implemented… it would be a blatant and clear breach of the JCPOA and would face a very harsh reaction from us.”

The language in the agreement may be interpreted in different ways.  It calls on the US to “cease the application of… all nuclear-related sanctions”. It does not specify whether Washington can keep them in reserve for possible use in the future.

Conservative parliament speaker, Ali Larijani, said at a press conference on Tuesday, that parts of the deal were “rushed”.

“Some of the sections of the JCPOA should have been written with more precision to stop differing interpretations,” Larijani said. “I believe Iran should file a complaint in regard of the Americans’ breach of the JCPOA.”

Rouhani and other top officials are due to meet on Wednesday to discuss the issue.  Rouhani has faced a barrage of criticism from conservatives who say his team made too many concessions in the nuclear deal for minimal economic gain.  In his speech on Tuesday, he stated that his team had not acted alone and that supreme leader Ayatollah Ali Khamenei was closely involved at every stage of the negotiations.  “We took no step on the JCPOA issue without consulting the honourable leader,” Rouhani said.

Although Because major Western banks remain reluctant to do business for fear of remaining non-nuclear US sanctions, Iran has managed to significantly ramp up its oil exports, however, it has struggled to rejoin the international financial system.  Iran has been unable to attract the foreign investment which Rouhani has said is necessary to rekindle the country’s battered economy.

An article in Al-Arabyia also reports on what Iran’s president said on Tuesday: that his country will not allow incoming US President Donald Trump to “tear up” Iran’s landmark nuclear deal with world powers.  He also warned that Tehran will react to any extension of American sanctions.

Rouhani was speaking at the University of Tehran commemorating the killings of Iranian students protesting a visit by then-US Vice President Richard Nixon in 1953.  His remarks show the high stakes he faces after Trump’s inauguration.

The timing, during an annual remembrance of the students’ killing at the hands of the US-backed Shah Reza Pahlavi’s security forces, also shows the internal challenges he faces.  “The US is our enemy,” Rowhani said. “They want to put pressure on us as much as they can.”

Rowhani never mentioned Trump by name in his speech, calling him, “some man … elected in the US.” Rouhani added, “Whatever plans he has, it will be revealed later.  He may desire to weaken the nuclear deal. He may desire to rip up the deal. Do you suppose we will allow this? Will our nation allow this?”

Trump called the multi-nation deal “catastrophic” and vowed to renegotiate it.

Rowhani warned Iran “will show a reaction” if President Barack Obama signs a law extending some of America’s sanctions authority by 10 years, The ISA. The law, first passed by Congress in 1996 and renewed several times since then, allows the US to sanction companies for doing business with Iran.

Rowhani said that extending the sanctions is a violation of the nuclear deal. The White House said that doesn’t violate the international accord.