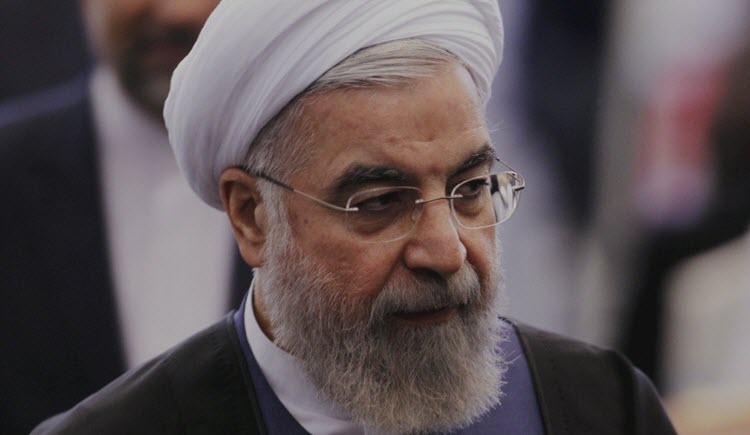 “Iran’s active diplomacy and the policy of constructive cooperation are based on the expansion of relations with all those who want to have good and friendly ties with Iran,” Nahavandian said, but his further comments suggested that this policy was not out of keeping with Iran’s traditional commitment to an aggressive stance toward the country’s proclaimed enemies, including the United States.

Notwithstanding the current American presidential administration’s role in engaging Iran diplomatically over its nuclear program, much of Rouhani’s speech focused on condemnation of what Tehran sees as inadequate American implementation of the resulting Joint Comprehensive Plan of Action. Rouhani repeated a narrative apparently originated by Iranian hardliners, blaming the US for the slow pace of post-JCPOA economic recovery, and the reluctance of European businesses and international banking institutions in reintegrating into the Iranian market.

Nahavandian praised these elements of Rouhani’s speech and argued that his more nuanced approach to Iranian foreign policy had resulted in unprecedented support for the Iranian position from among foreign nations and private entities, including some in Western Europe.

While it is true that some European businesses and policymakers have expressed desire for more explicit guidelines and assurances from the United States, it is also true that a great deal of their reluctance can be attributed to ongoing concerns about Iranian capital being used for the support of terrorism and the continuation of human rights violations. In recent months, a number of reports have argued that Iran could personally improve its prospects for international reintegration if it took measures to come into alignment with universal banking regulations aimed at providing institutions with certain assurances about the security of their investments.

Some have also concluded that the apparent resistance to these measures is indicative of an Iranian project to marginally increase trade relations with the world as a whole while not compromising on its defiant attitude toward the US. Rouhani’s General Assembly speech is just the latest in a series of statements that seem to indicate his administration’s close alignment with efforts by Supreme Leader Ali Khamenei and others to maintain the adversarial relationship between the two countries.

As Iran News Update has reported at length, Tehran’s anti-Western rhetoric has seemingly intensified in the year since the conclusion of nuclear negotiations. Also during that time, confrontations between the US and the Iranian Revolutionary Guard Corps have increased in frequency and severity, with IRGC radio operators threatening to shoot down US aircraft shortly after IRGC patrol boats forced one US Navy vessel to fire warning shots in order to force them to disengage from a close approach in international waters.

In the meantime, representatives of the supposedly more moderate Rouhani administration have variously justified IRGC behaviors while also participating directly in the supreme leader’s public rhetoric about JCPOA implementation and other matters. The UN General Assembly speech was a prime example of this trend, but it also continued in the subsequent days. Al Masdar News reports, for instance, that Rouhani delivered a speech on Wednesday boasting of Iran’s self-proclaimed status as a bulwark against American, Saudi, and Israeli imperialism.

In that speech, Rouhani presented the nuclear agreement as a victory not only for the Islamic Republic but also for “all of the world’s freedom-seeking nations.” The sentiment reflects the disputed claim that the JCPOA implied formal recognition of Iran’s “right” to nuclear enrichment. In another recent speech, Rouhani called for cooperative relations with traditional US adversary Cuba for the sake of further undermining a supposed Western plot to monopolize advanced technologies.

In Wednesday’s speech, Rouhani also repeated a familiar line about Iran being the “ultimate force” against terrorism, in spite of the fact that many of Iran’s publicly recognized patrons are widely regarded as terrorist groups. Although several Gulf Arab nations recently joined the US and Europe in formal recognition of the Iran-back paramilitary Hezbollah as a terrorist organization, Rouhani declared: “Gone are the days when Iran would be accused of supporting terrorism and the Iranian people would face other accusations such as building nuclear bombs as the true nature of the nation has come to light for the world.”

Of course, even as Western policymakers dispute the proper way forward in relations with Iran, there is overwhelming agreement that the Islamic Republic remains a state sponsor of terrorism. And furthermore, there are numerous policymakers in the US and other Western nations who object to the JCPOA specifically because they remain convinced that Tehran has long-term ambitions to acquire nuclear weapons.