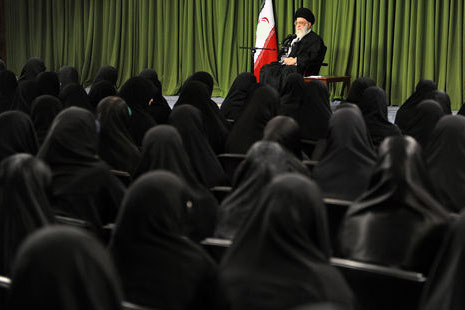 Women’s Committee of the National Council of Resistance of Iran issued a statement regarding the equal rights for women in employment and studies:

In his speech on Saturday, mullahs’ Supreme Leader Khamenei once again demonstrated the misogyny of this medieval regime and brazenly said: “If we want our vantage point to the issue of women be sound, logical, accurate and unshackling, then we must distance ourselves from the Western mindset in issues such as employment and gender equality. The gender equality of women and men is one of the utterly wrong convictions of the West” that is “obsolete” and “treacherous”.

While according to the official statistics of the anti-human regime of mullahs millions of women are responsible for their own livelihood and that of their children and are living in very difficult conditions, the Vali-e faqih of this regime says: “Employment is not among the principal issues that relate to women; family has priority” and “if women don’t assume any jobs, it is no disgrace or shortcoming”.

Mullahs’ Supreme Leader called the right to equal opportunity for employment as an “exploiting stance towards the capacity of women in economic issues” and one of the “utterly cruel and reactionary” mindsets of the West. He added: “With what logic should we bring women that physically and sentimentally have been created by God for a special part of life to the realms that cause them hardship?” And “even if there is a difference in this matter, it is not against justice because we should not impose fields of study or occupations on women that are unsuitable for their nature”.

The Women’s Committee of the National Council of Resistance underscores that Khamenei’s statements are in violation of many international laws and conventions, including the Convention on the Elimination of All Forms of Discrimination Against Women. It calls on all international defenders of women’s rights bodies to raise their voices against the day by day tyranny, discrimination and crimes perpetrated under the rule of the mullahs in Iran and to voice their solidarity with the Iranian women who are fighting with this medieval regime for over three decades. This is a regime that so far has arrested, tortured and executed tens of thousands of struggling women and tens of millions of women and girls suffer from all kinds of discrimination and deprivations under its rule.