“Lawmakers on Capitol Hill this week introduced the first formal piece of legislation expressing explicit support for the demonstrations that have rocked the Tehran and condemning the government’s violent response.”

The newspaper points out that: The protests are the most violent since the 1979 Islamic Revolution. Regarding the sanctions, it explained that: “Congress is stepping up its pressure on Iran amid continuing unrest across the country that has claimed the lives of hundreds of protesters with no end in sight.”

Negotiation from a weak stance to get out of the stalemate

Introducing a new US House of Representatives bill to impose further sanctions on the regime, while the Iranian President Hassan Rouhani is trying to find a way out of its quagmires with the help of Oman and Japan, is yet another heavy blow for the regime.

Rouhani, who falsely saw a green light from the US while the exchange of prisoners from both sides in covert negotiations, was happy that maybe they have gained US opinion and the door for further negotiations is now open.

He even seemed to contradict Iran’s supreme leader Ali Khamenei on this subject, speaking about the necessity of negotiations and said:

“If negotiation is necessary to break the enemy’s conspiracy, it is a must, it is revolutionary.” (Rouhani’s speech at the Farhangian University, 9 December 2019)

By mocking Khamenei’s latest position that, “we will not negotiate”, Rouhani said on 4 December: “It is very easy to say that I am not negotiating; express a slogan and say I will negotiate. The craft and difficulty are in negotiating.”

In response to these remarks, the Resalat newspaper reminded him that ‘Mr. President!’ You were one step or less away from being crushed under the people’s feet, and that of the authorities, parliament, and others, while “he” (the supreme leader” saved you. Government hierarchy and the leader, all these aside, at least have some cognition.” (Resalat, 5 December 2019)

The highlight of the bill is that this time, the parameters of the uprising and human rights violations have been brought into the equation as the main cause of the new sanctions.

According to the Washington Times. Rep. Ted Deutsch, who is a sponsor of the bill, said the regime’s crackdown is included in the draft bill and said:

“The Iranian regime has an infamous reputation for egregious human rights abuses against its own people, including by censoring the internet, restricting both religious freedom and political participation, imprisoning journalists, and torturing political dissidents,” said Rep. Ted Deutch, a Florida Democrat.

The US Department of State tweeted: “The regime in Iran continues to commit atrocities against its own people, including children. Hundreds have been killed; thousands imprisoned. The world must stand with the brave Iranian people & hold the human rights abusers responsible.”

The regime in #Iran continues to commit atrocities against its own people, including children. Hundreds have been killed, thousands imprisoned. The world must stand with the brave Iranian people & hold the human rights abusers responsible. #HumanRightsDay https://t.co/bsgP9cn72J

Earlier, U.S. Special Representative for Iran, Brian Hook, made a speech at the Foundation for the Defense of Democracies on 10 December, while emphasizing that “Our maximum pressure campaign will continue.” He stated:

“The Iranian regime demanded that the victims’ families pay for the bullets they used. Many were threatened that they would not receive the bodies of their loved ones if they did not comply with regime demands.

Among those murdered are at least a dozen children.” 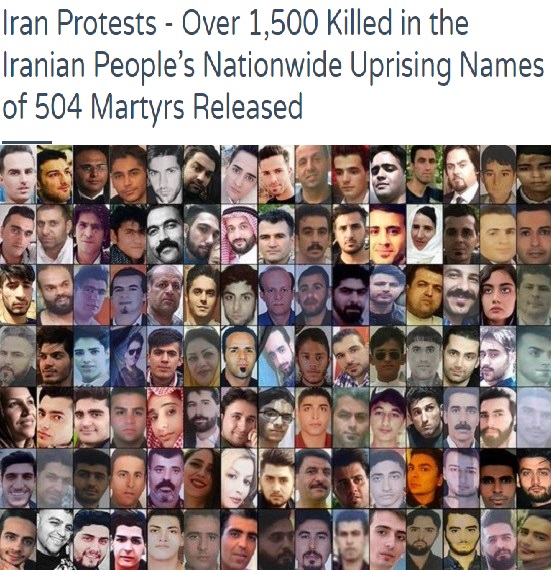 The Iranian government’s Achilles’ heel and the continuation of sanctions

But the fact that Rouhani is still trying his luck reflects the bad and helpless situation of the regime – a regime that has not yet recovered from the trauma of the recent protests, while in fear of future uprisings, has no other way than futile efforts in the hope of getting a little more time.

Rouhani knows that even if this negotiation takes place, the balance will not be the previous one. Other parties to the negotiations are aware of this. The introduction of the human rights parameter into the new sanctions bill confirms this fact. This is the nightmare that the Supreme Leader has always warned against.