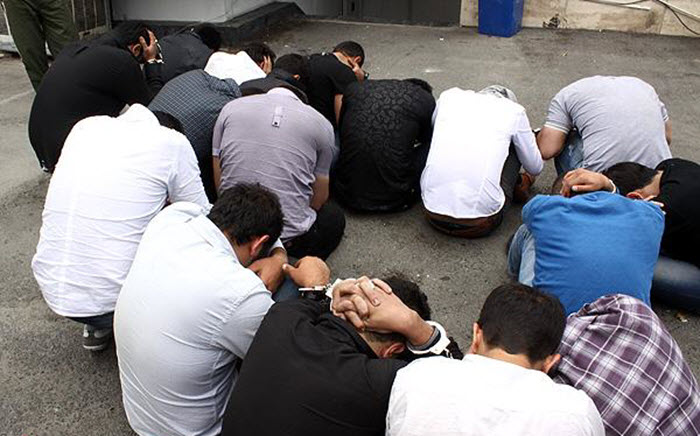 Mojtaba Vahedi, the head of the regime’s judiciary in Damavand, was quoted on Tasnim saying that security forces had monitored this activity and obtained a warrant to arrest the party-goers.

He indicated that charges would be filed against them.

Vahedi added: “Families must be more vigilant regarding their children to make sure they do not end up in such circumstances.”

Shahin Gobadi of the Foreign Affairs Committee of the National Council of Resistance of Iran (NCRI) said: “[This] indicates the vulnerable and shaky state of a regime that cannot even tolerate private festivities of the people, particularly the youth. It is becoming more evident that the mullahs are totally paranoid of any social gathering in fear of a popular uprising.”

Gobadi reiterated that the idea of a moderate Iran was a myth as it continues to repress its citizens. He noted that the clerical regime resorts to these extreme methods because of growing uprisings amongst its people.

This was not the first time that young people have been punished for celebration; the past three months has seen some 350 young Iranians arrested for attending a birthday party or a graduation celebration, with the vast majority being flogged as a punishment by the so-called ‘Morality Police’.

Earlier this week, Mohammad Ali Najafi, a former mayor of Tehran, shot and killed his second wife, Mitra Ostad. Polygamy is legal in the Islamic Republic of Iran, with men being permitted to marry up to four wives. The 67-year-old Najafi’s marriage to Ostad, 35, grew out of his extra-marital affair with the younger woman. Such secondary marriages are somewhat commonplace among high-profile Iranian men who wish to maintain a façade of religious piety after their infidelity has been exposed.

INU - Maryam Rajavi, the President of the National Council of Resistance of Iran (NCRI), called for the immediate and unconditional release of all Iranian Resistance members and supporters held in Iranian jails on Friday, April 19, following a boast by Minister of Intelligence Mullah Mahmoud Alavi about many Resistance members had been arrested in the past year.

INU- Maryam Rajavi, the President-elect of the National Council of Resistance of Iran, said that the US’s decision to designate the Revolutionary Guards Corps (IRGC) as a terrorist group is imperative for Middle East security, peace, and stability and will help to end war and terrorism throughout the region and the world.