They unfurled banners, held up during the Iran-Morocco match in St. Petersburg on Friday, read “#NoBan4Women” and “Support Iranian Women to Attend Stadiums”. 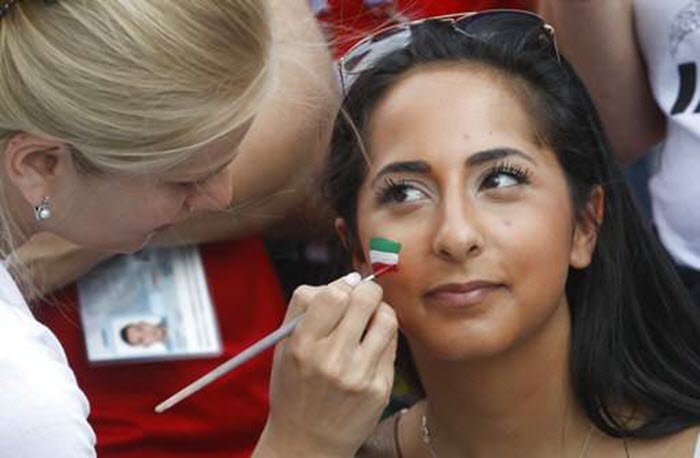 There was a brief commotion, when three stewards moved over to the protesters, who were seated on a bottom row near to one of the goals, and the banner was put away, but soon the protesters were once again allowed to display their banner. They even moved it to the other goal during the second half of the match

Some who attended the match, spoke to Western media outlets about the ban and how it affects them as fans, but they would only give their first names for fear of recrimination by the mullahs. 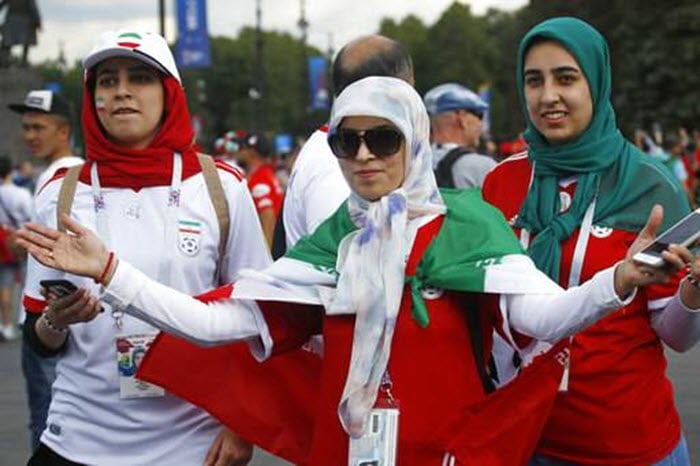 Nazanin, a young woman with the Iranian flag drawn on her cheek, said: “It’s my first time as an Iranian female to be in a stadium. I’m so excited.”

Husband Amin said: “We should come here, 4,127 kilometres to be at the stadium as a family. Why? This is stupid.”

Iranian women have been banned from attending male-only sporting events since the Iranian revolution in 1979. Even on the billboards advertising the World Cup in Tehran, no female fans are shown.

But female sports fans have certainly done all they can to protest the sexist law, including disguising themselves as men and posting pictures of it on social media.

British-Iranian student Ghoncheh Ghavami was arrested after trying to attend a men’s volleyball match at Azadi in 2014 and spent over 100 days in prison, mainly in solitary confinement.

ollowing this, the Regime allowed a small number of women to attend a volleyball match in Tehran in June 2015.
Change?

Iranian President Hassan Rouhani met FIFA president Gianni Infantino in Tehran on March 1, while 35 women were detained for trying to attend the Esteghlal-Persepolis derby in Tehran.

Rouhani promised that he would support a change to the law, but there is no reason to trust his word. The Iranian Regime is incapable of reform and the only way to overturn this sexist law (and all over discriminatory laws) is through regime change.

Regime change in Iran will be the main topic at the Free Ira gathering in Paris on June 30.