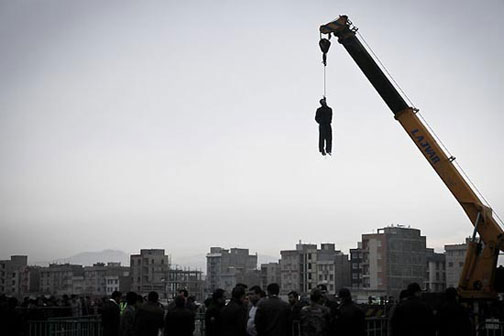 He then told friends he wanted to find out if the condemned man could have escaped the noose if he had had a knife.

But he died in the experiment after hanging himself from his rooftop stairway at his home in the city of Qazvin.

At dawn on Tuesday January 28, a 44-year-old prisoner was hanged in public in Qazvin. state-run media have widely spread the photos of this crime to create an atmosphere of terror.

In November, a seven-year-old boy named Mohammed also accidentally hanged himself while ‘experimenting’ with a clothes line in the town of Fishvar, Fars Province ,southern Iran.

A 12-year-old also died while playing a hanging game with his younger brother at their home in the province of Kermanshah, western Iran.

All the deaths are thought to be inspired by public executions. Last week alone, four prisoners were hanged in public as children were watching the brutal spectacles.