On February 12th, security forces and Bassij militia raided Farhangshahr, Padadshahr and Golestan districts simultaneously and entered the homes of the many people and brutally destroyed satellite dishes on rooftops and in yards. They were confronted with a coordinated reaction of the people; the agents quickly went back to their vehicles and fled the scene. Angry residents wanted to destroy the vehicles of the agents, but they stopped in fear of escalating the situation.

Instances of raiding homes and removing satellite dishes have increased since Rouhani has come to power. The very first month of Rouhani’s tenure in August 2013, security forces removed satellites in Ghazvin, a city near Tehran. According to Mehr News Agency, Rouhani made a shocking move in September with his second round of satellite equipment destruction. Revolutionary Guard tanks crushed 800 satellite equipments under their chains in Shiraz, a city popular with tourists in central Iran. In January 2014, satellite dishes in Ravansar in western Iran were collected. 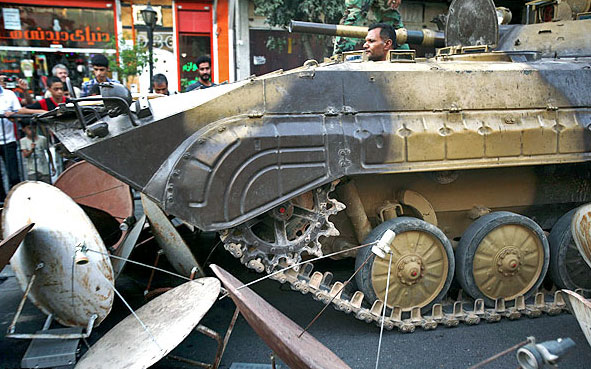 These attacks occur while the mullahs’ President, Rouhani, told this to reporters in his trip to New York last year: “In Iran everybody easily accesses satellite networks; even you will see satellite dishes on the rooftop of villagers.”

Meanwhile, the Deputy Chief of state security forces in Ghazvin province defended the removal of satellite dishes in Ghazvin; in January 2014 he stated: “Using satellite receivers is illegal.”