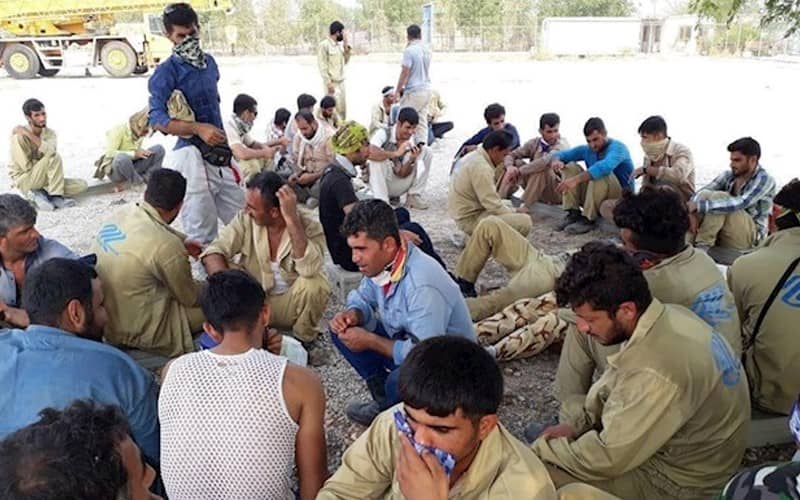 Workers’ protest immediately engulfed 21 cities in 12 provinces. In this context, authorities applied different techniques to end the strike, such as giving hollow promises, censoring protests’ news in official and semi-official media outlets, and threatening protesters to firing from work.

However, until now, the regime’s deceptive tactics have remained unsuccessful. Several workers also revealed that the government-linked employers had made phone calls and promised to increase their salaries over five times in return for ending the strike.

Of course, the authorities only attempt to silence protest by baseless words. In fact, there was no protest or strike if they were supposed to pay the workers’ insignificant salaries and pensions—not even paying fivefold salaries. Under the mullahs’ rule and anti-labor policies, Iranian workers and toilers must struggle to be alive.

Oil Workers’ Strike and Its Role in Overthrowing the Monarchic Dictatorship

For 120 years, the Iranian people are struggling against royal and religious dictatorships for fundamental freedoms, justice, equality, and citizen rights. On September 8, 1978, the Shah committed an unprecedented crime against barehanded demonstrators in Tehran. On that day, the regime’s forces opened fire on peaceful people and killed dozens of innocent citizens.

In response, oil industry employees and workers began a strike in major cities such as Tehran, Tabriz, Abadan, Isfahan, Shiraz, and Kermanshah. At the time, the Abadan refinery plant was the largest refinery across the globe, with around 20,000 permanent and contract workers and employees. Notably, in 1978, nearly 60,000 individuals were recruited in Iran’s oil, gas, and petrochemical industries.

The monarchic regime offered tempting promises to the protesting workers, such as an extraordinary 10-percent increase in salaries, decreasing the housing cost, and doubling the food coupons. As a result, more workers joined the strike and the entire refinery shut down.

Caption: Oil employees and workers of the Abadan refinery plant raised a banner reading, “The strike and struggle in the oil industry will continue until overthrowing the regime and establishing a just rule.”

The regime’s reaction made workers realize their power, and the ruling system’s weakness and oppressive apparatus. At the next step, workers demanded the abolition of martial law across the country, immediate and unconditional release of political prisoners, police, and army refraining from interfering in oil affairs, resolving academicians’ problems, and holding accountable the perpetrators of the September 8 massacre.

On October 19, 1978, all oil workers in the Ahvaz refinery plants joined their colleagues in Abadan, which imposed a heavy blow to the previous dictatorship’s economy. The strike made workers more unified and powerful as they resisted the siege imposed by royal elite forces and armored forces and continued until the toppling of the Shah on February 10, 1979.

At the time, Iran was the second major oil exporters around the world. The Organization of the Petroleum Exporting Countries (OPEC) had granted 20 percent of its oil-producing share to the Shah. Iran’s oil industry was exporting six million barrels of crude oil per day. Following the strike, the regime’s revenues had decreased by $57 million per day, according to the then-prime minister Jafar Sharif Imami.

The Mullahs’ Concerns over Repetition of the Shah’s Fate

“If officials and employers do not hear the voice of the workers on time or reject [the oil employees’ grievances] about salaries, pensions, and job security by attributing them to foreigners and foes, they will meet expensive rifts,” the state-run Shargh daily wrote on August 13, warning officials about the workers’ protests.

Subsequently, the daily claimed, “Workers deserve raising their voice for a fair life and work conditions… They have the right to form syndicates and unions to preserve their personal and group interests.”

However, under the mullahs’ fascism, establishing syndicates is an unforgivable sin. There was no word about labor law and rights in the regime’s constitution until November 20, 1990. Furthermore, the regime’s labor law openly prohibited any sit-ins, rallies, strikes, and marches. It also mentioned that establishing any labor union—out of the government’s direct control—is considered an attempt to overthrow the ruling system.

The Iranian people are expressing their real demands for fundamental change in the country’s political system louder than ever. In this respect, the international community should restrict the regime’s resources for funding terrorism and fueling ethnic and religious conflicts in the Middle East. The civilized world should stand alongside Iranian protesters in their struggle for freedom, justice, equality, and the rule of law, and stop offering economic, political concessions to the theocratic regime.