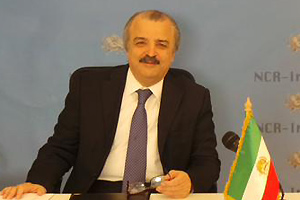 In an online Q&A session on Monday, Mohammad Mohaddessin, Chairman of the Foreign Affairs Committee of the National Council of Resistance of Iran (NCRI), addressed the current nuclear stalemate in Vienna and the broader nuclear negotiations between the Iranian regime and the world powers.

“It is now obvious to everyone that the [June 30] deadline will be missed. But what shocked the other negotiators during this round of talks was the fact that the Iranian regime rejected many of the parameters it had agreed to in Lausanne on April 2”, Mr Mohaddessin said.

“It is true that the regime came to the negotiating table because of the sanctions and its weakness, but the main reason Khamenei is at the table is to avoid another massive popular uprising in Iran. At the same time, the regime wants and needs nuclear weapons for its survival. Let us not forget that [former President Ali Akbar Hashemi] Rafsanjani in the 1990s said that having nuclear weapons will facilitate achieving the goal of dominating the region and exporting the revolution”, Mohaddessin said.

He added, “Khamenei wants to keep the regime’s nuclear infrastructure intact, hence he publicly reiterated his three main red-lines in a speech last week, ruling out unconditional inspections of the regime’s military sites, access to Iranian scientists and a halt in the nuclear R&D (research and development). These red-lines, among many others previously, published on Khamenei’s website, stand in contrast to what the regime had agreed to in the April framework agreement.”

Mr Mohaddessin pointed out that the regime’s lack of cooperation with an ongoing investigation by the UN nuclear watchdog, the IAEA, into possible military dimensions (PMD) of its nuclear programme is perhaps the best sign that the regime has not given up on its quest for a nuclear bomb.

In this regard, the Iranian regime tries to set aside and divert the talks from the issue of ‘transparency’ to instead discussing the vague issue of ‘trust-building.’

Mr Mohaddessin emphasised that any final agreement that closes the Iranian path to a nuclear bomb must include five important parameters: “signing and ratifying the Additional Protocol Plus by the Iranian regime, full and unconditional access to all Iranian sites and nuclear scientists, complete disclosure of past PMD activities and full cooperation with the IAEA investigation into this matter as well as removing all enriched uranium from Iranian soil. Talk of sanction relief before these steps are secured will be irrelevant.”

Answering the question of how to stop the Iranian regime from acquiring nuclear weapons, Mr Mohaddessin underscored that the regime’s Supreme Leader is currently taking advantage of the weak and misguided policy of appeasement by Western governments, and in particular by the United States, to extract more concessions from them while continuing its nuclear weapons program.

“In reality, stopping the clerical regime from acquiring a nuclear weapon is impossible without addressing the other two pillars in the regime’s survival strategy, which are support for fundamentalism and terrorism and domestic repression. In this regard the conflict between the regime’s various factions is not because of their different nature. No, the internal tension is a direct result of pressure from the bottom of the civic society with a growing dissent against the system and its pursuit of a nuclear project that the Iranian people do not want because it has only led to increased poverty and misery”, he added.

“What is needed is a firm policy against the Iranian regime since the current series of concessions to the regime is interpreted by the mullahs as a sign of weakness”, he said in regard to what the regional countries can do to stop a nuclear armed regime in Iran.

He added, “Of course the regional countries are not part of these nuclear negotiations but they play an important role and need to persuade the West, and in particular the United States, to adopt a more robust policy against the Iranian regime, because aside from the Iranian people, the people of the region are very much suffering from the regime’s aggressions in the region and its support for terrorism”.