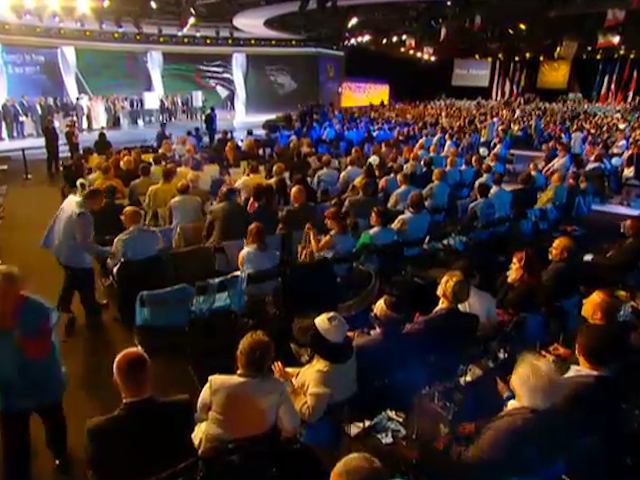 Those speeches raised a number of issues related to international relations with Iran. The US and its allies were criticized by former US officials from both political parties, several of whom read out a signed statement that was to be sent to President Obama and all current 2016 presidential candidates. The statement endorsed several policy recommendations of NCRI President Maryam Rajavi, including a harder line on the Iran nuclear talks and greater international focus on Iran’s ongoing human rights abuses. It also called for the opening of diplomatic dialogue between the US and the Iranian opposition.

Media coverage in the wake of the event has given varying degrees of attention to several issues raised by speakers at the rally. The conservative news site Breitbart provided a general description of the scope of the event as well as an excerpt from Rajavi’s speech that was focused on her recommendations to Western powers regarding the nuclear deal that is due on June 30.

Fox News, in one article covering the event, emphasized Mrs. Rajavi’s statement to this same effect. The mullahs “cannot and should not be trusted,” she said, cautioning the US against making concessions to the regime that would prevent a deal from absolutely constraining the Iranian nuclear program. But Fox News also used Rajavi’s comments as a jumping-off point for Western experts’ commentary on the nuclear issue, quoting Lieutenant General Michael Flynn as saying that the emerging nuclear deal “suffers from severe deficiencies.”

Fox also quoted Giuliani as emphasizing the practical value of the NCRI in America’s conflict with Iran over its nuclear program. The group’s principal constituent organization, the People’s Mojahedin Organization of Iran, famously revealed details of that program in 2002 and on several subsequent occasions. Giuliani thus credits the NCRI with helping to expose the true intentions of the Iranian regime.

Giuliani and several other speakers used the event to point out that far beyond simply not providing adequate support to the NCRI, the US has actually betrayed its constituents insofar as it offered formal promises of protection to members of the PMOI living in Iraq, but subsequently abandoned those individuals and left them in danger of recurring attacks from Iran-allied forces.

Breitbart picked up this thread in its coverage, quoting California Society for Democracy in Iran President Nasser Sharif as urging the US and UN to fulfill their responsibilities to protect and relocate the Iranian dissidents stranded at Camp Liberty. NewsBlaze similarly called attention to this issue on Monday, referencing Saturday’s speeches on the topic by former head of the UN Assistance Mission in Iraq Ad Melker and former Member of the European Parliament Struan Stevenson, who is the author of a book on the People’s Mojahedin Organization of Iran.

In addition to bringing some media attention to these and other issues of Iran policy, Saturday’s rally has given further exposure to some of those dignitaries who participated in it. US Army Colonel Wesley Martin, who was stationed near the Iranian exile community in Iraq during the US-Iraq War, has attended several NCRI rallies to urge for the fulfilment of American responsibilities to the people of Camp Liberty. On Monday he appeared on France24’s “The Interview” to discuss broader issues of Western policy toward Iran and the Middle East.

Martin criticized both the current and former US presidential administrations, saying that a policy shift in favor of Iran has contributed to worsening destabilization of other countries of the region. Cautioning against the inclination to trust Iran on a nuclear deal or to collaborate with it against supposedly more serious threats such as the Islamic State of Iraq and Syria, Martin said, “Iran is using the United States, it’s using the West, because we don’t have a strategy.”

Martin attached his signature to and read a portion of the policy initiative document sent to the president and to presidential candidates on Saturday, urging a set of changes that would arguably make up for the missing strategy by confronting Iran and promoting dialogue and collaboration with the Iranian resistance.