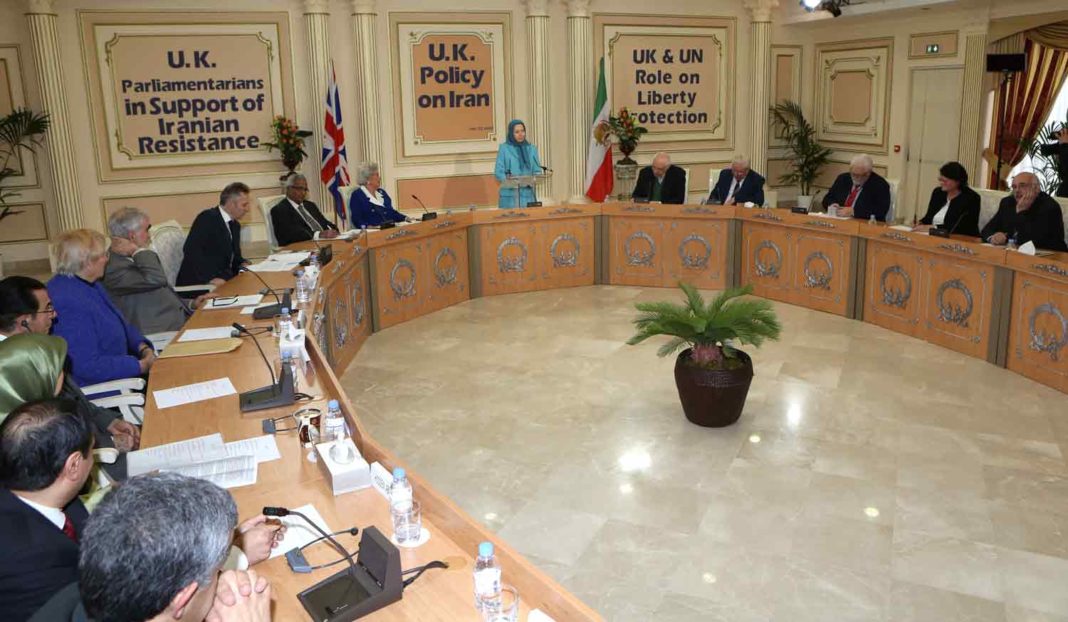 Rouhani intends to save the regime; human rights situation deteriorates and meddling in region increases under his term

A cross-Party delegation of MPs and Peers, led by former Commons Speaker Rt. Hon. Baroness Boothroyd and Lord Carlile of Berriew QC CBE on Monday, 27 January 2014 met with Mrs Maryam Rajavi, President-elect of the National Council of Resistance of Iran, at the Council’s headquarters in Auvers-sur-Oise, north of Paris. This meeting was arranged at the initiative of the British Parliamentary Committee for Iran Freedom, jointly chaired by Lord Carlile and David Amess MP and supported by a majority of MPs and 200 Members of the House of Lords.

Mrs Rajavi praised the support of the UK Parliament for the Iranian people and Resistance and said that the Iranian regime, which was forced to take one step back over its nuclear weapons projects, is now facing widespread internal crises and in order to balance this has stepped up suppression and executions and its meddling in Syria, Iraq, Lebanon, Yemen and other regional countries to unprecedented levels. Furthermore, it is putting all its strength into massacring the residents of Camp Ashraf and Camp Liberty through its mercenaries in Iraq and is simultaneously using the international community’s weak response to continue to cover up its nuclear weapons projects.

The Parliamentary Committee reiterated that despite the Geneva agreement, Tehran’s attempts to obtain nuclear weapons is an issue of serious concern, and in order to allay concerns the final agreement must implement the UN Security Council Resolutions and ensure that Iran halts all uranium enrichment and accepts the Additional Protocol.

The Parliamentarians reiterated that in the term of the regime’s new President, the human rights situation and basic freedoms and the regime’s meddling policies in the region have reached critical levels. This shows that Rouhani’s sole purpose is to save the regime in which he has held very senior security and military roles for 30 years. They strongly condemned the trips to Iran by UK and other Parliamentarians who are known lobbies of the mullahs, which only encourage to the Iranian regime to step up killings and suppression. They reiterated that these parliamentarians do not represent the UK Parliament and majority members of the Parliament support establishment of democracy and freedom in Iran.

While declaring their solidarity with the PMOI members in Camp Liberty who have faced repeated massacres and deadly attacks in the past year, the UK delegation strongly criticised the UK government for its inaction towards their plight. They said that the UK as the second-largest member of the Coalition that went into Iraq is fully responsible for the security and well-being of the residents and must use its influence in the UN Security Council to uphold the security and well-being of the Iranian refugees in Camp Liberty. They called for the release of the seven Ashraf hostages and the urgent transfer of the residents to the US, UK and European countries. They further called for security provisions to be allowed into Camp Liberty and urged the UN to station permanent monitors in the camp. The delegation said it is imperative for the UN to carry out a clear and impartial investigation into the 1 September 2013 massacre at Camp Ashraf in order to prevent a repeat of the crimes and urged the upcoming Human Rights Council session to put this on its agenda.

The delegation described the Iranian regime’s meddling in the region, in particular in Iraq and Syria, and Tehran’s involvement in Syria’s political future as dangerous and said that Mrs Rajavi’s proposal to evict the Iranian regime from Syria is the only solution to the crisis. They added that the brutal suppression of the people of Iraq and the summary executions carried out in this country by Nuri Maliki under the guidance and with the support of the Iranian regime is the flip side of the massacre of Liberty residents. The delegation urged the international community to not allow Maliki to murder his opponents and set the stage for his third term as Prime Minister under the guise of combating Al-Qaeda.

The cross-Party Parliamentary delegation strongly criticised the misinformation propagated against the organised Iranian opposition, especially the residents of Camp Liberty, and said it had a sinister political motive to appease Tehran and paved the way for further attacks and massacre of Liberty residents. They reiterated that based on their extensive experience, the PMOI, the Iranian Resistance, its President-elect and her 10-point plan were the best guarantor of democracy and human rights in a future Iran and peace and stability in the region and world.