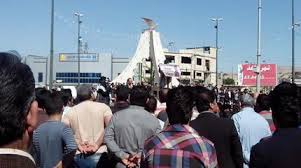 The protesters chanted “Zargami, resign, resign.” Zargami is the head of the state broadcaster IRIB.

The State Security Force rushed to the scene and closed off streets in a large area leading to the demonstration to prevent it from spreading to other parts of the city.

In city of Andymeshk, over 2,000 protesters held rallies in the main streets. The angry protesters broke large windows of banks and buildings belonging to repressive forces. They also damaged a number of governmental vehicles.

The Arab tribes in the southern province of Khuzestan, in cities of Shadgan, Sosangerd, Howeyzeh, Abdolkhan and Dasht-abbas; as well as the Zargani tribes joined the protests by their Bakhtiari countrymen in Khuzistan and other provinces expressing their solidarity.

Mrs. Maryam Rajavi, President-elect of the Iranian Resistance, hailed the uprising and brave Bakhtiari community, and called on all Iranians – especially the courageous youth – to rise in different parts of the country in support of their fellow countrymen. Iran’s Bakhtiari community has always played an important and decisive role in the struggle against colonialists and dictatorships in Iran, especially since Iran’s Constitutional Revolution in 1907, and insulting them means insulting all Iranians, she added. The mullahs’ regime is the enemy of Iranians from all walks of life, ethnic and religious group, and its overthrow is a nationwide demand.