Mrs. Rajavi pointed out that the interim agreement between Tehran and P5+1 signed last November, should lead to a comprehensive agreement that puts an end to the mullahs’ quest for the nuclear bomb. But from the time the mullahs realized that their hand-picked government in Iraq was destined for failure, Ali Khamenei, the regime’s leader, changed his tone. The mullahs’ about face is due to shifting calculations regarding the consequences of a nuclear agreement, which they now see as exponentially devastating. 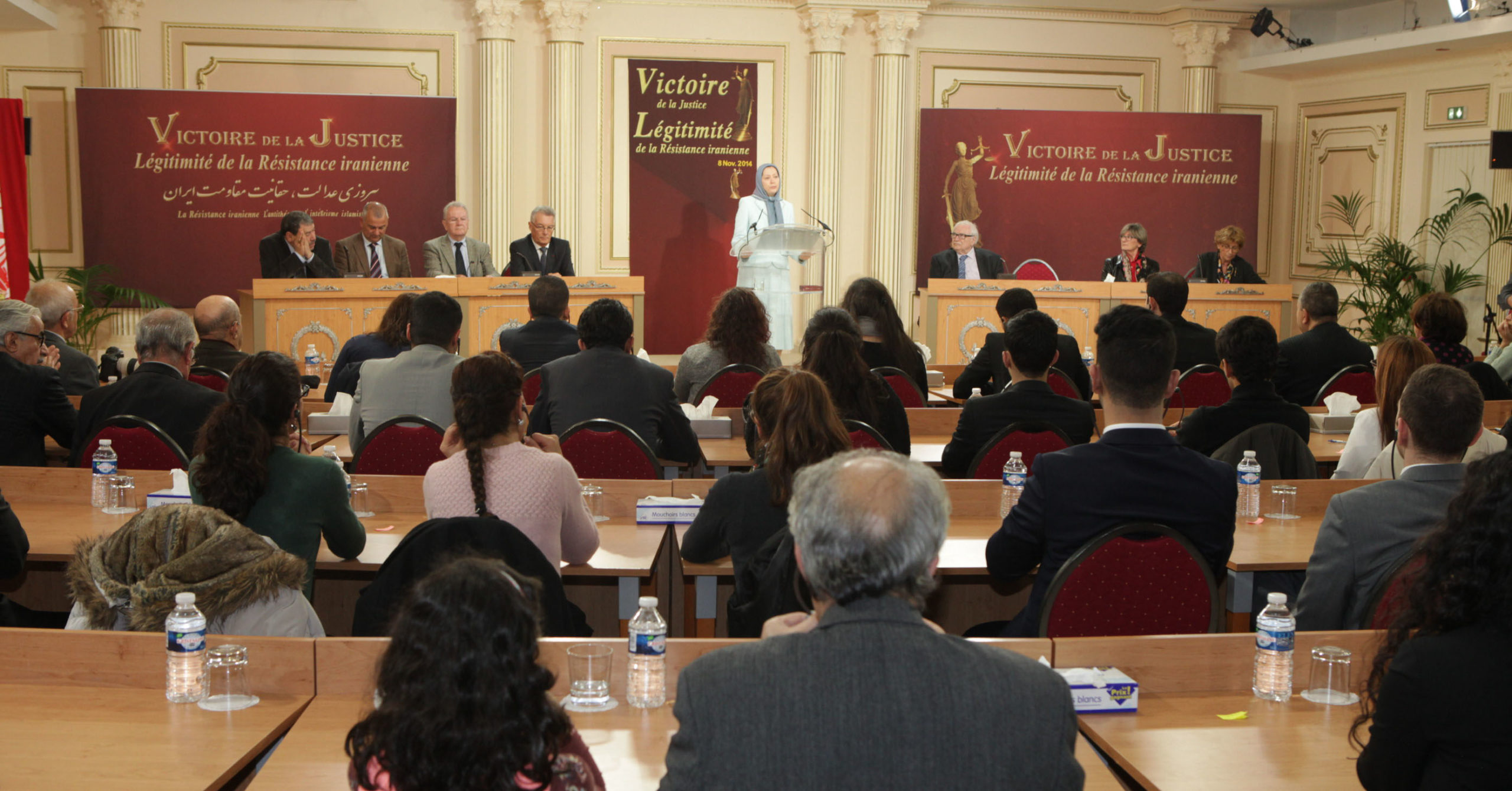 According to Ms. Rajavi, another element that contributed to mullahs’ brazenness was repeated concessions by the West. Those concessions included not insisting on the implementation of the UN Security Council resolutions on Iran’s nuclear program to increasing the number of centrifuges that the regime is allowed to have. As a result of this policy, the regime “was emboldened to seek more concessions from the West or to buy time to keep open its path to nuclear bomb.”

On the verge of the Nov 24th deadline for a comprehensive agreement on Iran’s nuclear program, Ms. Rajavi warned that any agreement should include complete implementation of the UN Security Council resolutions, an absolute halt to all enrichment, acceptance of Additional Protocol, and snap inspections from all the suspicious sites in Iran.

President-elect of the Iranian resistance reiterated that Western governments have kept silent on escalating human rights violations in Iran and the mullahs’ exportation of mass terror in the region in order to obtain the clerical regime’s acquiescence in the talks. She said this policy has only resulted in emboldening the Iranian regime. Thus,any agreement should include stop of execution and torture in Iran as well as an end to the clerical regime’s belligerent polices in the region.

During the  meeting at the headquarters of the National Council of Resistance of Iran in Auvers- sur-Oise, in northern suburbs of Paris Ms. Rajavi addressed a crowd of leading political and social figures, concerned Iranians and others concerned by the Iranian regime’s drive for nuclear arms.

Scores of French dignitaries, including Henri Leclerc, the honorary President of the French League of Human Rights, Yves Bonnet, the former head of DST, the French counter-intelligence agency, and Abderrahmane Dahmane, President of Council of Muslim Democrats of France, participated in the event and expressed their support for the Iranian resistance in their remarks. A significant number of representatives of Iranian youth associations from Europe took part in the event.

Mrs. Rajavi reviewed the despicable human rights record during the presidency of Hassan Rouhani, including a new wave of acid-attacks against women, suppression of ethnic and religious minorities, and the exponential increase of executions, including execution of Reyhaneh Jabbari whose sole crime was defending herself against egregious physical abuses.

Mrs. Rajavi emphasized that this regime cannot survive without the execution of the youth and the suppression of women, since it is very fragile and fearful of popular uprising. This regime is the primary patron of fundamentalism, terrorism, and the main exporter of crisis and terrorism in Iraq and Syria. This export of terror is a vital component of the regime, as it is submerged in irremediable political, social, and economic crisis.

In another portion of her remarks, Mrs. Rajavi addressed the issue of the pressures exerted by the clerical regime and its agents in Iraq on Iranian dissidents residing in Camp Liberty, Iraq, , members of the People’s Mojahedin Organization of Iran (PMOI/MeK), the principal Iranian opposition movement. She demanded that camp liberty be recognized as a refugee camp and be placed under the supervision of the UN, and all the siege on the camp, in particular the medical siege be put to an end and the minimum needs of the camp for safety and security of the residents be guaranteed.