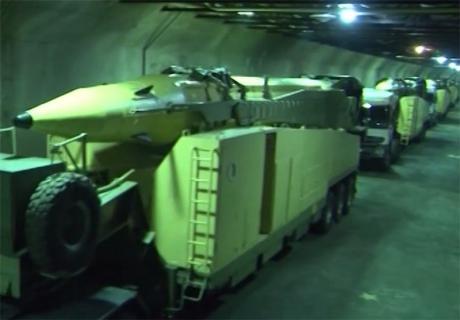 During the period of nuclear negotiations between Iran and the P5+1 group of nations, Iranian Supreme Leader Ali Khamenei made public statements in which he said that Iran would accept no foreign “imposition” regarding its national defense, and that the nuclear agreement would include no limits on Iran’s ballistic missile stockpiles.

While this is technically true of the July 14 deal, the United Nations and European Union resolutions governing that deal do “call upon” the Islamic Republic to refrain from any further work on or testing of missiles capable of carrying nuclear weapons, for a period of eight years. Until that deal and the associated resolutions go into effect, separate UN resolutions remain in place barring Iran from such work, without exception.

But since the conclusion of nuclear negotiations, other Iranian officials including President Hassan Rouhani, who is regarded as a moderate by some in the West, reiterated Khamenei’s positions on the nation’s missile stockpiles. Tehran’s commitment to non-cooperation was made clear in October when it test-fired an Emad-class missile that is capable of carrying a nuclear warhead. The UN’s panel of experts on Iran recently confirmed that this constituted a violation of UN Security Council Resolution 1929.

That demonstration closely coincided with the Iranian Revolutionary Guard Corps’ decision to broadcast images of an underground missile silo on state media. It was followed up in November by another missile test, this time of Ghadr-class weapon capable of carrying an even larger payload, and for an even longer distance. The comparative specifications effectively confirm that the latter test is also a violation of UNSCR 1929.

Because the Emad missile test is banned under this resolution, Tuesday’s unveiling of the new missile depot has also been described as a violation, since the state television images showed the same type of missiles housed therein.

The broadcast appears to be the latest in a series of provocations responding not only to the existence of the relevant resolutions, but also to tentative US plans to enforce those resolutions with respect to the October missile launch. The Treasury Department indicated last week that it was preparing new sanctions against individuals and businesses with ties to the Iranian ballistic missile program.

But soon afterward, those plans were put on hold, possibly out of concerns that Iran would regard any new sanctions whatsoever as grounds for canceling the nuclear deal. Such a hardline response to the enforcement measures is evidently endorsed even by the so-called moderate Rouhani, who personally responded to the sanctions plans by ordering his defense minister to increase the size of Iran’s ballistic missile stockpiles.

At approximately the same time, IRGC Brigadier General Hossein Salami publicly claimed that those stockpiles were already so large that the country had run out of space in which to store its weaponry.

Iran’s latest effort to show off its arsenal contributes to the threat invoked by such boastful public statements by Iranian officials. But more than that, it comes at a time when concerns over nuclear weapons have already been escalated in some circles, given North Korea’s recent claim that it had tested a miniaturized hydrogen bomb.

The Jerusalem Post also quoted Israeli Energy Minister Yuval Steinitz as saying, “Israel and the US should increase intelligence sharing in order to ensure that Iran is not breaching its nuclear agreement through involvement in North Korea’s nuclear project.”

Suspicions about such collaboration have substantial precedent. The National Council of Resistance of Iran issue a report last May extensively detailing apparent collaboration between Iran and North Korea on nuclear development, including secret visits to Tehran by North Korean nuclear scientists.

For the NCRI, the Israelis, and other critics of the nuclear agreement, each of Tehran’s efforts to defy ballistic missile bans is further justification for skepticism about its willingness to abide by the deal itself, or to cease clandestine work such as its collaborations with North Korea.