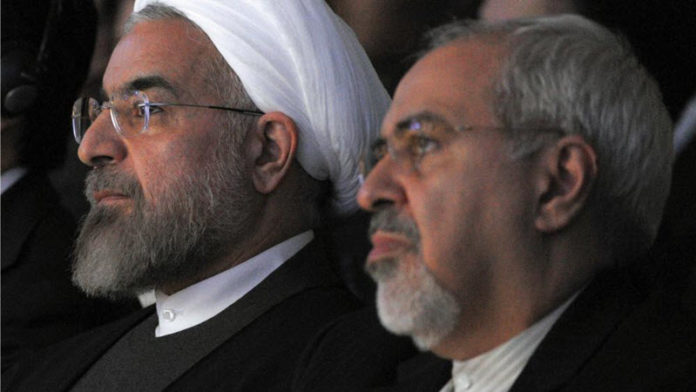 Trump cited the deal’s failure to address Iran’s ballistic missile program and regional influence as a reason for potential withdrawal even before he took office. And since that time, he has floated the idea of establishing a new, more comprehensive agreement, despite Tehran’s insistence that this is not an option.

Iranian talking points about the JCPOA are part and parcel of a larger strategy of non-cooperation, which was in place while nuclear negotiations were still ongoing. At the time, Supreme Leader Ali Khamenei publicly barred his subordinates from engaging in discussions with the US or its allies over any matters other than Iran’s enrichment of nuclear material. Because the 2013 election of Iranian President Hassan Rouhani had been greeted in some circles as a victory for “moderation,” there was some speculation that Khamenei’s order ran contrary to the preferences of the administration. But subsequent events have cast doubt on this notion.

In the years since the signing of the JCPOA, and especially in the months since American withdrawal, Rouhani and his cabinet officials have actively participated in anti-Western rhetoric, including the blanket rejection of any further negotiations or compromises. The Iranian president repeated that sentiment on Wednesday in a televised speech that accused the US of seeking to overturn Iran’s theocratic regime. According to the Associated Press, Rouhani also declared that the differences between the two countries are so great that they are “neither negotiable nor can there be a compromise.”

Both hardline and “moderate” officials have worked to promote the narrative that Iran is under virtually constant threat from the US. However, little actual evidence has been cited in support of that narrative, and the nature of the threat is defined in only the vaguest terms. Since around the time of the nuclear negotiations, hardliners like Khamenei and the Iranian Revolutionary Guard Corps have been sounding the alarm over Western “infiltration,” and they have used this as pretext for crackdowns on foreign nationals as well as domestic social phenomenon that supposedly demonstrate sympathy with Western lifestyles and ideas.

In keeping with this trend, Rouhani’s speech failed to point out specific threats but described Iran as being “in economic and psychological war with America and its allies.” Such statements arguably hold the US responsible for the domestic political consequences of economic sanctions on Iran, as well as virtually any foreign communications that reach an Iranian audience. In the terminology of the Iranian regime, such factors potentially contribute to the “soft overthrow” of that regime, although Rouhani insisted that “their wish will not come true.”

The vague condemnation of American activities may be viewed as ironic by those critics of the Iranian regime who observed its celebrations of the 40th anniversary of the Iranian Revolution last month. The protracted event involved the public exhibition of numerous weapons, accompanied by explicit military threats against foreign enemies, including the dubious announcement that the Iranian navy was prepared to send a flotilla to the Atlantic Ocean, near the American coast.

To whatever extent Tehran feels it is genuinely at risk from US-based pressure tactics, it is not clear how military readiness drills are expected to counter them. But those drills, in combination with media narratives about a foreign threat, help to project an image of strength at a time when the Islamic Republic is at risk not only from its international isolation but also from domestic protests that have been virtually constant, in one form or another, since the outbreak of a nationwide uprising at the end of 2017.

Tehran’s response to those protests naturally includes efforts to discredit them by tethering them to preexisting media narratives about belligerent Western powers. In January 2018, while the uprising was at its peak, Khamenei credited the leading domestic opposition group, the People’s Mojahedin Organization of Iran, with much of the on-the-ground organizing but also declared, without evidence, that it was operating at the behest of a “triangle of enemies” consisting of the US, Arab states, and Israel.

Interestingly, though, this narrative changed in the wake of the uprising’s violent suppression, and Rouhani stated in his speech on Wednesday that the US was pushing for Iran to return to a time when it was ruled by a pro-Western monarchy. This claim, too, is being repeated without evidence, but is presumably intended to discourage Iran’s pro-democracy activists, including supporters of the PMOI, from accepting foreign assistance.

The earlier claim of US-backing for the PMOI-led uprising is belied by the fact that State Department documents continued to preclude the PMOI as an option for Iran’s future government at the time of the protests. However, the assertion that the US prefers an Iranian monarchy is belied by the fact that this has since changed. According to Al Monitor, the US government indicated this week that the PMOI now enjoys a place on a list of acceptable alternatives to the current, Islamist regime.

This adjustment may be attributable in part to the fact that advisors and supporters of President Trump, including Rudy Giuliani and John Bolton, are longstanding supporters of the PMOI. But the recency of the decision may indicate that it was undertaken partly in reaction to the successes of PMOI organizing during and after the anti-government uprising. According to the group’s parent coalition the National Council of Resistance of Iran, there were 250 protests across 71 Iranian cities last month alone, suggesting that the regime faces a persistent crisis and a threat to its hold on power.

Many of these protests relate to the deteriorating economic situation – a problem that cannot be meaningfully addressed by accusations of foreign subterfuge or appeals to military pride. But as Iranian propaganda networks work to promote the idea of economic resilience, Iranian officials are insisting they have support from foreign powers other than the US, including US allies in Europe.

Deputy Foreign Minister Abbas Araqchi said as much on Wednesday in the wake of a meeting with the remaining parties to the JCPOA – the United Kingdom, Germany, France, Russia, and China. Araqchi praised the European nations for their establishment of a trade mechanism that will supposedly circumvent US sanctions. But just one day earlier, Iran’s Fars News Agency quoted the same official as demanding that Europe “pace up” its efforts and provide Iran with better financial incentives for remaining in the deal.

Foreign Minister Javad Zarif echoed this sentiment, according to another Fars report, even as Tehran remained intransigent in the face of European conditions for full implementation of the Instrument in Support of Trade Exchanges, or INSTEX. Those conditions involve compliance with the anti-money laundering rules of the Financial Action Task Force, something the Islamic Republic has ostensibly committed to, but has failed to establish through the legislative process.
A video report by the Iranian propaganda outlet Press TV reported a bill to this effect as being “in limbo” in the Expediency Council, a body that mediates disagreements between legislative and clerical bodies. The council previously halted other bills along these lines, because FATF compliance was deemed adverse to the country’s interests, in part because it would certainly interrupt the flow of money to Hezbollah.

Press TV indicated that while some lawmakers were willing to put international trade ahead of such matters, others were inclined to dig in their heels on Iran’s hardline identity, even at the risk of alienating would-be sources of European economic support. Still others explained that they were ready to embrace that support, provided that it was specifically oriented toward “sidelining Washington.”
To the extent that the FATF debate showcases a relative lack of interest in cooperating with Europe, it threatens to deepen the Iranian regime’s isolation at a time when overall tensions with the West are already escalating. The recent news that Iran and France had agreed to exchange ambassadors is indicative of ongoing efforts on both sides to establish the support that Araqchi envisions. But it does not diminish the fact that this exchange follows six months during which the diplomatic posts were vacant, owing to disputes involving the Iranian regime’s behaviors.

Chief among these behaviors are recent terror threats against on Western soil. Last June, two Iranian operatives and a high ranking diplomat were arrested for plotting to set off explosives at a rally near Paris that was attended by tens of thousands of supporters of the PMOI.