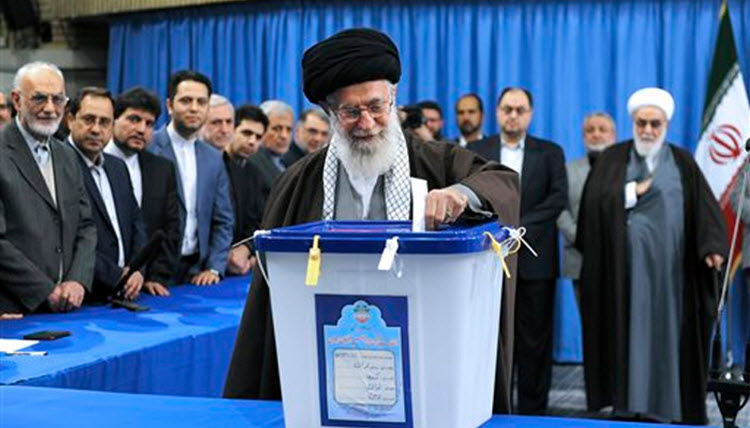 It appears that the Supreme Leader’s inner circle, as well as the Islamic Revolutionary Guard Corps (IRGC), have been taking steps to engineer the outcome for several months.

Their plan revolves around ensuring there is a second round of elections as happened in 2009 when Ahmadinejad was chosen. This time, they want Ebrahim Raisi to be selected.

Raisi was a key member of the so-called “death commission” that was responsible for the execution of more than 30,000 political prisoners in what is known as the 1988 massacre.

The other candidate they would like to choose is the current mayor of Tehran – Mohammad Bagher Ghalibaf – who used to be a member of the IRGC.

So how can they make this happen? Firstly, they reunited senior IRGC officials to establish JAMNA (the Farsi abbreviation for the Popular Front of Islamic Revolution Forces).

The chair of this group is Mohammad Bagher Zolghadr who rigged the 2005 election so that Mahmoud Ahmadinejad won the presidency.

After Ahmadinejad won in 2005, Zolghadr said: “The presidential election was unprecedented, held under very complicated political circumstances when foreign powers and acquisitive currents inside the country had long planned to direct the election results in their favor and prevent the establishment of a principalist cabinet. Complicated actions were needed and the principalists were fortunately able to gain the majority’s support.”

Enlightening (and incriminating) comments were made by an IRGC official in 2013. Ali Saeedi claimed that it was the IRGC’s “inherent” duty to “logically engineer the elections”. He also said that “those who were selected acted far better than those who were elected”.

Another way that the sham elections are engineered is for the disqualifying of candidates that the Supreme Leader does not support. This is done via the Guardian Council that has already disqualified most candidates.

The IRGC senior officials have been planning to harm the Rouhani faction as much as possible, while at the same time ensuring that there is not a repeat of the 2009 popular uprising that is greatly feared by the fragile Iranian regime.

Rigging methods are used to increase the number of votes and propaganda activities have been spread in the media.

The IRGC, essentially a security entity, is involved every step along the way when it should actually have nothing to do with the elections.

This is why the West has called the elections in Iran a sham. There is no hint of democracy.