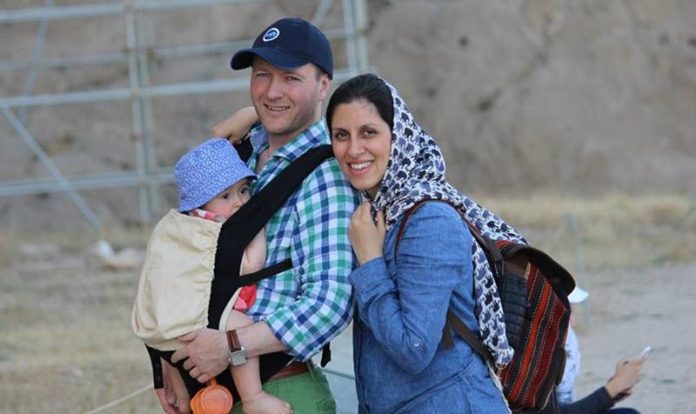 Her husband, Richard Ratcliffe said last week that he was cautiously optimistic about his wife being transferred to prison, hoping that it would result in her being released. However, his hopes were dashed when he heard that she was being guarded by agents of the notorious Islamic Revolutionary Guard Corps (IRGC). The last time she had been in contact with the IRGC, guards had attempted to extract a false confession from her.

Ms. Zaghari-Ratcliffe was arrested at Tehran airport after a visit to her family with the purpose of introducing her young daughter to her Iranian relatives. Her daughter, Gabriella, who is now 5-years-old, has stayed in Iran and has been looked after by her maternal grandparents.

Ms. Zaghari-Ratcliffe was taken back to the notorious Evin Prison in Tehran on Saturday and she was allowed to see her mother and daughter.

Her husband relayed comments made by his wife after her return to prison. She said that she is relieved to be back in prison after spending 6 days chained to a bed in the psychiatric ward. She described her time there as “proper torture”.

Mr. Ratcliffe said that his wife’s lawyer will be putting pressure on the health commission to rule that she is “not fit to stay in prison”. He added that they will be calling for her unconditional release.

The Iranian regime has said that the charity worker travelled to Iran to spy on the Iranian government – a claim that the family strenuously denied.

The Iranian government has been accused of arresting and detaining dual nationals with the aim of gaining diplomatic leverage over foreign governments. Indeed, only last year, the Iranian foreign minister Javad Zarif offered the United States a deal to swap prisoners with the goal of bringing detained Iranians back to Iran from the U.S.

Ms. Zaghari-Ratcliffe has acknowledged the regime’s tactics, saying that she is tired of being used in a political game. Her move to the hospital last week comes at a time when relations between Iran and the United Kingdom are heating up. On Friday, the IRGC seized a British tanker that was sailing through Omani waters in the Strait of Hormuz. The incident is being considered retaliation for the British involvement in detaining an Iranian vessel near Gibraltar a few weeks ago.