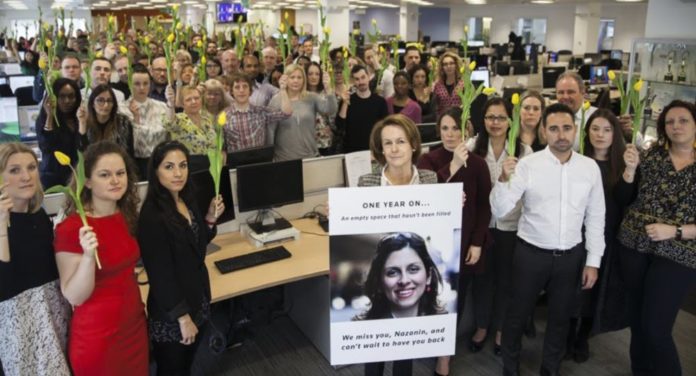 The new charges pending against her mention her alleged attendance of a protest outside the Iranian embassy in London. No evidence appears to have been presented to support this allegation, and in any event it is difficult to see how such an activity on foreign soil could constitute a crime in the Islamic Republic. However, Iranian political prisoners are regularly convicted on the basis of hearsay including unsubstantiated accounts of their political views or affiliations.

Accordingly, the charges also accuse Zaghari-Ratcliffe of having joined organizations with defined goals of overthrowing the Iranian regime. In absence of clarity as to which organizations are being referred to, it is reasonable to speculate that this charge refers, at least in part, to the BBC, whose Persian service is officially banned in the Islamic Republic. Zaghari-Ratcliffe’s role in the organization was, however, with its charitable wing; and her career continued on this trajectory to include her current employment by the Thomson Reuters Foundation. However, it has been suggested that this also was a contributing factor in her conviction, even though the foundation does no work in Iran, as Zaghari-Ratcliffe’s employers have pointed out.

The CNN report quotes Zaghari-Ratcliffe’s husband, Richard Ratcliffe, as saying that when she was initially summoned to be informed of the new charges, she thought that she was being granted temporary release. Two weeks earlier, she had reportedly been granted a promise of this release, for the purpose of visiting her nearly three-year-old daughter Gabriella. When Zaghari-Ratcliffe was arrested last year, her child’s British passport was confiscated, barring her from leaving the country and returning to her father. Gabriella has remained in the care of her Iranian grandparents ever since, visiting with her mother generally twice a week and speaking to her father only online and by telephone, during which time she has largely lost her ability to communicate in English.

Temporary release, or furlough, is often granted to prisoners in Iran for family visits, for specific holidays, or for medical reasons. But it is also routinely denied to political prisoners and other inmates who are subject to particular pressure from authorities. Zaghari-Ratcliffe is not unique in this respect or with regard to her actual treatment being in defiance of previous promises.

A similar situation was highlighted by the Center for Human Rights in Iran in an article about the political prisoner and teachers’ rights activist Esmail Abdi. In June 2016, Abdi ended a hunger strike that had lasted more than a month after judicial authorities agreed to review the case that had resulted in his six-year sentence for peaceful activism. But on Monday, CHRI reported that the formal request for that review had been rejected. Abdi himself suggested that the judge in the case had been influenced by the IRGC’s addition of several charges to his indictment after the fact. His initial sentencing had been based on charges of propaganda against the state and collusion against national security.

In addition to continuing the fight for a case review, Abdi’s lawyer also faces the challenge of arguing for his eligibility for conditional release under Iran’s News Islamic Penal Code. But his case is also a representative example of the IRGC’s power over the judiciary and its commitment to punishing political prisoners with arbitrary extension of their prison terms, among other punitive measures.

Recent reporting on Zaghari-Ratcliffe’s case indicates that one year in the Iranian prison system has already taken both a psychological and a physical toll on her, and these effects have been amplified by the threat of a much longer sentence. The CNN report quotes Richard Ratcliffe as saying that his wife “thought she was having a heart attack” after being presented with the new charges. Meanwhile, various other reports suggest that she may not even be permitted to receive adequate medical treatment even if this feeling turns out to be a symptom of genuine health problems.
The denial of medical treatment to political prisoners became a particularly visible issue last month after images were released of the former political prisoner Alireza Rajaie after he lost his left eye and part of his jaw as a result of sinus cancer that had been left undiagnosed and untreated during the time he was held in Evin Prison.

His is not the most serious case of this kind, and it was brought up once again by CHRI in the context of a report on the death of labor activist Mohammad Jarrahi, whose thyroid cancer also remained untreated while he was serving a five year sentence in Tabriz Prison. As in the case of Rajaie, the authorities’ decision to deny him medical furlough came in defiance of recommendations by independent physicians who were able to examine the men and determine that they were in need of specialized and potentially life-saving treatment.

The same report pointed out that Jarrahi was sentenced alongside fellow activist Shahrokh Zamani, who died of a heart attack in 2015 after being similarly denied medical treatment in Rajai Shahr Prison. Notably, Rajai Shahr was also the site of a recent, weeks-long hunger strike by several political prisoners whose prescribed medications were confiscated when they were forcibly transferred to a section of the prison with upgraded repressive infrastructure including 24/7 video surveillance and diminished access to water and ventilation.

CHRI also noted that the political prisoners Atena Daemi and Golrokh Ebrahimi Iraee wrote a joint letter in July calling attention to the lack of access to medical care, particularly for female inmates, who are barred by religious rules from receiving full treatment by male doctors. The letter came in response to a staged tour of Evin Prison for select foreign diplomats, part of a series of public relations stunts by the regime aimed at dispelling but not addressing reports of human rights abuses.

The issues of denied medical treatment and arbitrary sentencing both came up in media reports on Wednesday, as well. It indicated that there was a growing domestic campaign against the persecution of a Sufi religious group known as the Gonabadi Dervishes, but in the meantime its members face legal repercussions for their faith, as well as what has come to be known as “civil death.”

The article specifically notes that the dervish Mohammad Ali Shamshirzan has been refused access to specialized medical treatment despite doctors insisting that this is urgently needed. In addition, he and fellow dervish Hamid Arayesh have been told that there is no ceiling for their legal punishment and that they will be detained for life unless they disavow their faith. This easily leads to the conclusion the authorities intend for the men to die in prison, even if they are not presently willing to execute them outright.

Iran has the highest per-capita rate of execution in the world, and well over 3,000 persons were executed during the first four years of Hassan Rouhani’s presidency. This figure does not include those who died in prison or in pre-trial detention, either as a result of torture or as a result of medical conditions that only became fatal in absence of treatment.

Rouhani campaigned for his first term and for his reelection in May on a platform of domestic reforms, but he has failed to deliver on any of these. The CNN report on Nazanin Zaghari-Ratcliffe notes that in September he claimed his hands were tied in the cases of such dual nationals, despite having previously assured Iranian expatriates that they could return to their home country without fear of reprisal.

In response to the new developments in Zaghari-Ratcliffe’s case, Monique Villa, the CEO of the Thomson Reuters Foundation urged the British government to “finally intervene to end the ordeal of this British national.” Such commentary is reminiscent of criticisms levied against the British government for not speaking out on this issue, and also criticisms of Western nations in general for putting human rights on the back burner while the focusing their attention narrowly on the 2015 nuclear agreement.

Shortly after the announcement of the new charges against Zaghari-Ratcliffe, the BBC reported that British Prime Minister Theresa May had spoken on the phone to US President Donald Trump regarding Iran, but only to urge him to preserve the nuclear deal, which he was expected to decertify by the end of the week.