Across Iran, ‘honor killings’ of young women are an all-too-common phenomenon, and regularly feature in news headlines these days. In a recent report from February 5, in the southwestern province of Khuzestan, a young man was seen at the Kassaei Square in Ahvaz carrying the head of a young woman who had been decapitated. Onlookers, including a group of mechanics fixing vehicles, recalled the murderer boating, “This is her head; we brought it.” The victim has been identified as 17-year-old Mona (Qazal) Heidari.

Even several days after this traumatic event, eyewitnesses remain shocked, and a heavy atmosphere has since shaded the place. “An accident!? It was a disaster,” a man responded to a freelance reporter, who tried to shed light on other aspects of the crime. “If [officials] call this an accident so as they should kill an entire city to be named a disaster.”

The eyewitness added, “We tradespeople could neither sleep nor eat something for three days. We were working when a vehicle stopped at the square, and a man got off with a girl’s head. We later understood that they left the beheaded corpse of the girl at Nasser Khosro St. and brought the head here to show it.”

On the same day, the semi-official Rokna website published the video of the man and the story. A day later, officials declared that the website had been shut down due to posting the video. In response, on February 8, Judiciary spokesperson Zabihollah Khodaeian said, “These cases harm public opinion and have a psychological impact.”

However, observers believe that the government tries to downplay the crime. They reminded people of the re-ban of ‘Khane Pedari’ [Father’s House] movie about ‘honor killings’ in Iran two years earlier. Notably, the judiciary had filed a lawsuit against movie producers, including director Kianush Ayyari.

Mona Is not the First Case

Mona Heidari was forced to marry her husband Sajjad at the age of 14. Fearing her husband’s violence and threats, Mona fled to Turkey. However, her father eventually convinced her to return to Iran, where Sajjad waited to kill her.

“In our district, everyone called Sajjad feeble. He paraded the head of Mona to say he was a zealous man. My son had already threatened with beheading Mona,” Sajjad’s’ mother whined, trying to evade the murderer.

Under Iran’s misogynist system, Mona Heidari was neither the first victim of ‘honor killings’ nor the last one. Indeed, the Islamic Republic’s constitution has institutionalized gender discrimination, letting men commit whatever they want against women, particularly against their wives and sisters, and daughters, with impunity.

Young Women from Various Areas with the Same Fate

In recent years, many women throughout the country are falling victim to these abhorrent crimes. Emblematic among the cases was Mobina Souri, 14, strangled with her headscarf by her husband, a young cleric, on August 30, 2021, in the Suri region in the western province of Lorestan.

On August 21, 2021, the mother of one, Sabri Nalbandi, 24, was murdered by her husband in Takab, in the northwestern province of West Azerbaijan province. Her husband burned the house to remove the evidence of his crime.

Earlier that month, Sara Pirzadi was shot and killed by her cousin on August 8 for marrying another man, while two days earlier, Reza Ahmadian, 42, opened fire on his wife and her family in a garden in Sanandaj. Shilan Mondami, 24, had married Reza at the age of 14 but had no children. The reason behind her murder was that she had asked for a divorce.

In May 2020, the people were taken aback by the ruthless beheading of 14-year-old Romina Ashrafi in the northern province of Gilan, at the hands of her father, who beheaded her with a sickle. Romina was another victim of forced marriages.

These are just some of the harrowing murders in Iran under the label of ‘honor killings,’ which is the term used by officials to downplay the severity of the crimes against defenseless women. The government attributes these crimes to family affairs, not only does it justify violations of women’s rights, but it also blames men who show mercy to their wives or girls. 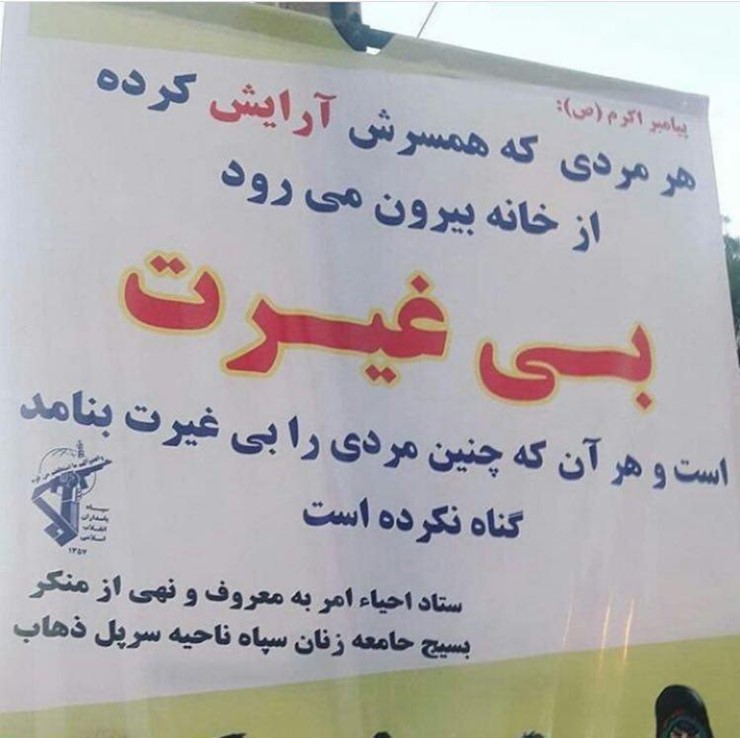 “Every man whose wife leaves the house wearing make-up has no honor; no one sins if they call such a man dishonorable,” read a banner installed by Women’s paramilitary Basij Force affiliated with the Islamic Revolutionary Guard Corps (IRGC) in Sarpole Zahab, the western province of Kermanshah.

Iran’s Resistance dedicated its IWD conference to the bravery of Ukraine’s women, #BreakTheBias