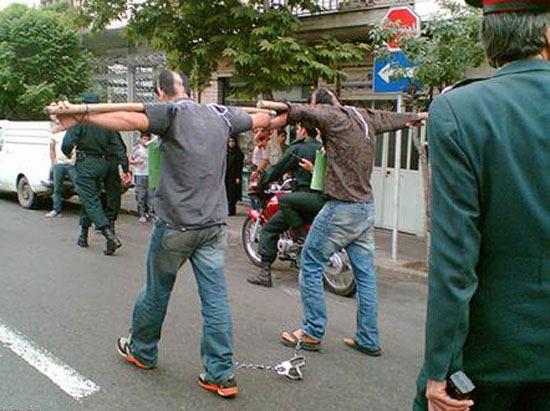 The head of police in the city, Mehrdad Mehregan, said the man had been arrested a day before and was paraded on Sunday in one of main streets in the city based on a order by judiciary officials.

Such degrading punishments are systematically used in Iran by the police for petty “crimes” in order to embarrass and humiliate the youth in their neighborhood.

The victims are usually paraded with a sign hanged from their neck.

Last April, three young men were paraded in women’s clothing through the Iranian city of Mehran after being charged with robbery and drug dealing.

A group of women protested the ‘offensive’ decision by a judge saying the sentence was degrading to women, and particularly Kurdish women, as one prisoner was forced to wear a traditional female Kurdish outfit as paraded in a Kurdish city.