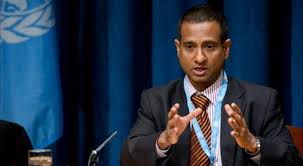 This week, Ahmed Shaheed issued his ninth report on Iran’s human rights violations, and while he found himself more capable of discussing the situation with some Iranian officials, he continued to be barred from speaking openly with victims of human rights abuses or visiting the country in any capacity. Iran’s strategy for responding to UN reports on its human rights record has always been to obstruct investigations and then simply reject findings as being based on biased sources.

Iranian officials’ responses to the latest report indicate that this strategy remains intact. Fox News reported on Wednesday that Mohammad Javad Larijani, the head of Iran’s own Human Rights Council, simply denied Shaheed’s warnings about an escalating rate of executions in the country, even though these warning have been repeated by a number of human rights organizations, all of which have separately determined that the judiciary has carried out well over 700 executions in 2015 alone and is on track to dramatically exceed 1,000 killings by the end of the year.

Naturally, concerns about Iran’s human rights abuses also extend well past the issue of executions for drug offenses and other crimes that do not rise to international standards for the justification of the death penalty. They also include such things as the regime’s criminalization of dissent and its systematic mistreatment of non-death penalty inmates. On these points, too, the regime’s officials continue to respond with familiar denials.

An editorial in Townhall points out, for instance, that Shaheed’s report found 480 people who were punished for failing to fast during the first 15 days of the holy month of Ramadan, but regime officials will only acknowledge three such incidents. The same editorial also points to other violations of international law, such as punitive amputations, and it reiterates the problem of executions, emphasizing that some of these are carried out against political dissenters and journalists.

Indeed, the application of the death penalty is so commonplace in Iranian prisons that it seems as though it is difficult to be held as a political prisoner for any period of time without directly witnessing the execution of one’s friends and fellow prisoners. In an interview published by IranWire this week, Iranian journalist and human rights activist Mehdi Khodaei discussed the psychological strain of this experience during the roughly five years that he spent in prison as punishment for his lawful activities.

Khodaei said that four of his own cellmates were taken away to be executed during that time. And this came only after he spent the first 58 days of his imprisonment in solitary confinement, and then another seven months in semi-solitary confinement.

His 2010 arrest came in the midst of a crackdown on dissent that stemmed from the 2009 protests against the reelection of President Mahmoud Ahmadinejad and have gradually continued to this day, spanning the 2013 election of President Hassan Rouhani, who promised the release of political prisoners. The International Campaign for Human Rights in Iran emphasized once again on Tuesday that these promises have been repeatedly violated. It pointed out that dozens of Iranian expatriates have been arrested upon returning to their home country, despite promises of safe passage.

The International Campaign highlighted two recent examples of this phenomenon. In one instance, it pointed to the case of Amin Anvari, a 21 year-old student activist who was taken into custody after returning from a trip to Turkey with his family, where his mother suggested that he remain after learning of the arrest of several of his friends.

His arrest and that of his friends was related to Facebook postings advocating for basic civil rights, and Anvari is now reportedly under intense pressure to issue a false confession, while his family is being harassed for refusing to comply with demands that they neither protest the arrest nor speak to the media. Such demands for silence are commonly reported in the case of such political arrests, and no doubt are part of Iran’s strategy of simply denying human rights abuses.

The demand for silence from arrestees and their families is complemented by an ongoing crackdown on other forms of speech, including political speech and art. The International Campaign also reports that former reformist Member of Parliament Esmail Gerami Moghaddam was arrested in July after returning from doctoral studies in India and Malaysia, and has now been sentenced to six years in prison for charges including “collusion against the state.”

Cases such as his indicate that politicians in the Islamic Republic cannot stray far from the official state ideologies without suffering consequences that effectively end their political life. It is with cases like this in mind that Iranian dissident groups and other strict opponents of the regime tend to reject the notion of President Rouhani’s comparative moderation.

This perspective is supported by his failure to speak out against any of latest prosecutions that apparently expand upon an already extensive criminalization of dissent. The apparent crackdown has been highlighted in several outlets in recent days in the context of the arrests of Fatemeh Ekhtesari and Mehdi Mousavi, two poets whose works had previously been published with approval from Iran’s censorship authorities.

IranWire used these cases as the basis for an analysis of Iran’s ongoing, and arguably heightening defiance of international law when it comes to accusations that artistic or political speech is “insulting to the sacred.” The article notes that international law does allow for some restrictions on speech when it might be deemed legitimately hostile, but it emphasizes that none of the prominent cases like those of Ekhtesari and Mousavi fit the criteria for such hostility.

IranWire concludes that judicial authorities systematically misinterpret both Iranian and international law to allow for any criticism of the regime whatsoever to be criminalized as insulting to sacred subjects. Furthermore, even if there was any defense under international law for the nature of Iran’s arrests, there is no such defense for the nature of its punishments, which in the case of Ekhtesari and Mousavi consist of 11 and nine year prison terms, as well as 99 lashes for shaking hands with persons of the opposite sex.

Even to the extent that it allows for censorship and restrictions on speech, international norms require a reasonable proportionality of punishment, and Iran’s sentences plainly exceed this. The authorities in Tehran tend to defend themselves either by simply denying that they are in violation, or rejecting international norms outright. But a wide range of both domestic and international activist groups agree on the nature of these and other human rights violations.