Unsurprisingly, the summary affirmed what has been said month after month regarding the trajectory of Iranian authorities’ violations of civil and political rights. Throughout most of the time that Hassan Rouhani has been president, beginning in 2013, those authorities have apparently been working to compensate of any appearance of prospective reform by intensifying their restrictions on political expression and other aspects of public life. But the IHRM report quoted one Iranian Twitter use as saying that this only reflects the evolution of a reality that has existed since the 1979 revolution: “Iran hasn’t been a country for 40 years – it’s a prison for 80 million people.”

One of the latest examples of the authorities’ domestic escalation comes in the form of efforts to amend the country’s criminal code in order to formalize the denial of due process rights in some cases. Iranian courts are routinely criticized for conducting unfair trials, often preceded by torture and forced confessions, while depriving defendants of access to a lawyer. But the proposed amendment would explicitly revoke the right to an attorney in cases where defendants ostensibly face the most serious criminal accusations, including accusations of national security crimes.

A statement by Amnesty International declared that this would be a “crushing blow to Iran’s already deeply defective justice system.” The regime’s rejection of the principle of universal legal protections for all citizens is made more dangerous by the inherent vagueness of the judiciary’s criteria for “most serious crimes.” As IHRM notes, “dozens of human rights activists, independent journalists, and political dissidents have been facing national security charges.”

The Amnesty statement goes on to say that by normalizing the lack of legal representation for these and other individuals, the regime would be going a long way toward also normalizing the behaviors that are easier to carry out in absence of an independent advocate. Specifically, Amnesty says that it would “further consolidate patterns of torture and other ill-treatment against detainees to extract forced confessions during interrogations.”

Such legal changes pose a risk not only to future political prisoners but also those who are already serving sentences for supposed violations of the regime’s ill-defined religious and political laws. This is to say, authorities have repeatedly demonstrated their readiness to impose fresh charges on individuals who are already behind bars, either to prevent them from being released after their legally defined period of incarceration, or to make an example of them in the wake of ongoing activism and dissent.

Last Friday, IranWire reported on one of the latest examples of this arbitrary punishment, thereby affirming the message of the IHRM human rights summary as it concerns an ongoing and escalating crackdown. The report concerns 30-year-old Atena Daemi, who was initially arrested in October 2014 and ultimately sentenced to five year in prison for her civil society activism and her online communications. IranWire notes that the regime’s penchant for arbitrary punishment was put on display soon after her sentencing, when she was released on bail 14 months into the five year term, then suddenly re-arrested and ordered to serve the entire remainder.

Perhaps resentful of the fact that Daemi nearly escaped serving a heavy sentence, hardline authorities have continue to target her ever since, denying her medical treatment despite a worsening health condition and subjecting her to five additional sentences. Two of these, “insulting the supreme leader” and “propaganda against the regime,” are identical to the charges that resulted in her initial sentencing. The state’s evidence for those repeat charges consists almost entirely of the letters and statements Daemi has written in order to carry on her peaceful activism from behind bars.

Daemi is far from the only political prisoner to be subjected to new charges or prevented from seeking medical treatment in recent days. The IranWire report notes that a fellow resident of the women’s section of Evin Prison, Golrokh Ebrahimi Iraee, is also facing new charges. The initial charges against her were based entirely on the discovery of a short story she had written in a private journal, which was obtained during a raid on the home that she shared with her husband and fellow political activist. Both Daemi and Iraee may jointly face charges that include “disobeying prison guards” because of defiant gestures they have undertaken together in prison, such as organizing a hunger strike and singing protest songs.

Meanwhile, Iran Human Rights Monitor reports that Ameneh Zaheri Sari, a 20-year-old inmate in Sepidar Prison and one of hundreds of persons who were arrested in an indiscriminate sweep of the Ahwazi Arab community in November 2018, is experiencing acute swelling throughout her body but has been barred access to outside medical assistance. Sari is eligible to be released on bail, and her family has secured the specified sum, yet authorities have made no move to transfer her to hospital.

This mistreatment, together with the nature of her arrest, suggests that members of Iran’s ethnic and religious minorities are particularly affected by worsening crackdowns. IHRM quoted Philip Luther, the Middle East and North Africa advocacy director for Amnesty International, as saying that the spark for last November’s mass arrests – a terrorist attack by militant separatists – was being used as “an excuse to lash out against members of the Ahwazi Arab ethnic minority, including civil society and political activists, in order to crush dissent in Khuzestan province.”

Although the incident in question was particularly expansive in its reach, smaller crackdowns routinely take place throughout the country, targeting Ahwazis as well as Kurds, Balochis, adherents to Sunni Islam and the Baha’i faith, and others. And this is to say nothing of the various reports of individual mistreatment suffered by members of these same groups.

Mere membership in a religious or ethnic minority may be regarded as a challenge to the Iranian regime’s Persian Shiite identity, as evidenced by the extremely wide range of minority activities that have been known to result in criminal punishment. On Thursday, the Iran Human Rights website reported that a woman by the name of Zahra Mohammadi was still in detention more than a month after apparently being arrested for teaching classes on the Kurdish language and Kurdish culture, as a member of the Nojin Socio-Cultural Association.

On the same day, IHRM highlighted the ways in which fairly innocuous criminal violations can result in serious or even fatal consequences for Iranian minorities. The report indicates that a young Balochi man named Mousa Shahbakhsh had been pursued and shot dead by police because he was suspected of driving without a license. The same report underscores the sensitivity that has developed among the public regarding Iran’s systematic mistreatment of its minorities. Residents of Sistan and Baluchistan Province reportedly gathered to protest outside the governor’s office in the wake of the killing, leading authorities to fire their weapons into the air and arrest at least 30 participants.

Elsewhere, the regime has seemingly made efforts to enforce this sort of response to protests and grievances by minority groups. IranWire illustrated this fact on Tuesday by reporting that even government officials are not immune to the consequences of verbally defending groups that have been specifically targeted for repression by the regime as a whole. The report specifically notes that Shiraz city council representative Mehdi Hajati was arrested at home and taken to begin serving a one-year sentence for the crime of using social media to speak in support of Baha’i activists.

Hajati was brought up on charges including “propaganda against the regime” in September 2018 after writing on Twitter, “During the past 10 days, I tried any opportunity to release two of our detained Baha’i friends without any luck. Our generation must fight against domestic injustice as well as foreign threats.” This was sufficient for the judiciary to initially label him as a member of “opposition groups,” although this criminal charge was later dropped.

Although the one-year sentence thus reflects a favorable outcome compared to the punishment he might otherwise have been given, the latest developments in his case underscore how seriously regime authorities view such matters. IranWire explains that defendants are usually given formal notice of a guilty verdict and even permitted to wait for an appeal before being taken to prison, whereas Hajati’s sentence was implemented with unusual speed.

In fact, some of the councilman’s defenders highlighted the authorities’ strange priorities at the time of his initial arrest in November. For instance, Member of Parliament Bahram Parsayi said in a tweet, “There are serious crimes [taking place] in Shiraz that have been left unchecked… And yet they arrest a city councilor for a tweet, which does nothing to benefit national security or public unity.”

But considering that Hajati’s sentencing is not an isolated incident, the authorities evidently do not agree with this assessment. More serious defenses of the Baha’i minority can even result in much lengthier sentences, suggesting that the regime perceives the 19th century Persian faith as a real threat. On Saturday, Iran Human Rights reported that the lawyer Amirsalar Davoudi had been sentenced to 30 years in prison for defending political prisoners, including Baha’is.

Davoudi’s professional activities, alongside his communications with foreign media and domestic users of the popular Telegram messaging app have reportedly led to him being charged with “gathering and collusion,” “spreading false information,” “insulting Iranian officials,” “insulting the Supreme Leader,” “propaganda against the system,” “forming a group to overthrow the political system,” and cooperating with the enemy government of the United States of America.” 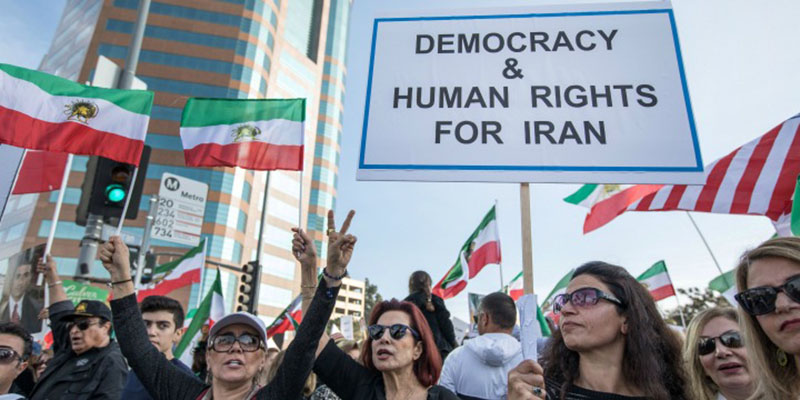 Cases like this indicate that Iran is attacking activism and minority identify from multiple angles, sometimes simply obstructing access to legal protections and sometimes simply criminalizing independent efforts to provide this and other safeguards. In keeping with the not-yet-passed amendment to the criminal code dealing with access to lawyers, IranWire reported on Sunday that this access had been denied in the case of three Baha’is who were arrested in Semnan one month ago and whose whereabouts and condition are currently unknown, even to their families.