One of the wonders of this century in Iran is that happiness and sadness are tied together. The totalitarian rule over Iran brought sadness for many families in that country.

So, the families of the victims of the regime’s crimes find themselves celebrating the Persian new year with their deceased family members on their tombs and setting up the traditional ‘Haft-Sin on their graves.

The mother of Behnam Mahjouhi a Darvish and political prisoner who died in the prison because of neglect by the regime’s prison officials, is one of these people who celebrated this new year with her son, but at his grave.

She had never believed that this ‘enemy of the people’ would take her son in such a way from her. Bahieh Namjoo, the mother of Navid Afkari, while having a sad face is another mother who visited her son at his grave during this new year celebration. But for this mother this is not the final sadness; her two other sons are behind prison bars too.

The graves of Pejman Gholipoor, Mohamad Taheri, Behrooz Asgharpoor, Amir Rezaii, Mehrdad Moinfar, Mohsen Mozafari, Milad Mohaghaghi and many other of the victims of the protests of the latest year were decorated with flowers by their families too.

But the most beautiful scene was the setup of the traditional Haft-Sin next to the graves of these people fallen for freedom. A Haft-Sin decorated with the images of these victims. Remembering the people’s desire for a free country. 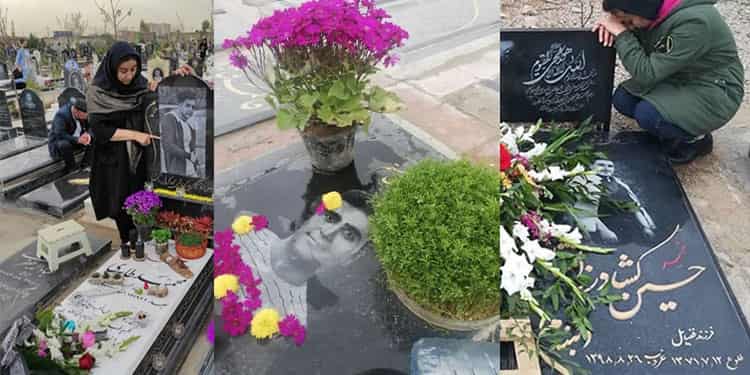 But this is not the end of the sadness in a country seized by the mullahs. Many political prisoners are now behind the bars of the prison. Most of them can even not imagine having a new year’s celebration. Many of them are now in solitary confinement. And a new year celebration is for them senseless. Some of the women political prisoners have not seen or celebrated the new year with their children for many years, like Maryam Akbari Monfared.

In a message, Mrs. Farangis Mazloum, the mother of political prisoner Soheil Arabi, said: “We came close to the prison and set up the Haft-Sin but they did not allow us to sit there. We set up the Haft-Sin close to our children. Congratulations to all Iranians. Whether in Iran or outside Iran. I hope this year will witness our liberty. So that everyone, the whole of Iran, will set up the Haft-Sin together and live together in joy and freedom.”

And Mrs. Sedigheh Maleki, the wife of political prisoner Hashem Khastar, said in her message: “We are in front of Vakilabad prison. Here, with a heart full of pain, we want all prisoners, each and every prisoner, to become free sooner. Their homes become happy. From the Almighty God, I wish the best for all the Muslim Iranians and for all the world to be free. May God support everyone and have a good year ahead.

“From here, I congratulate all those who support us inside and outside Iran. Those who supported us and brought my voice to the world. From here I hear the voice of Hashem saying, ‘Wait. The dawn is near.’”