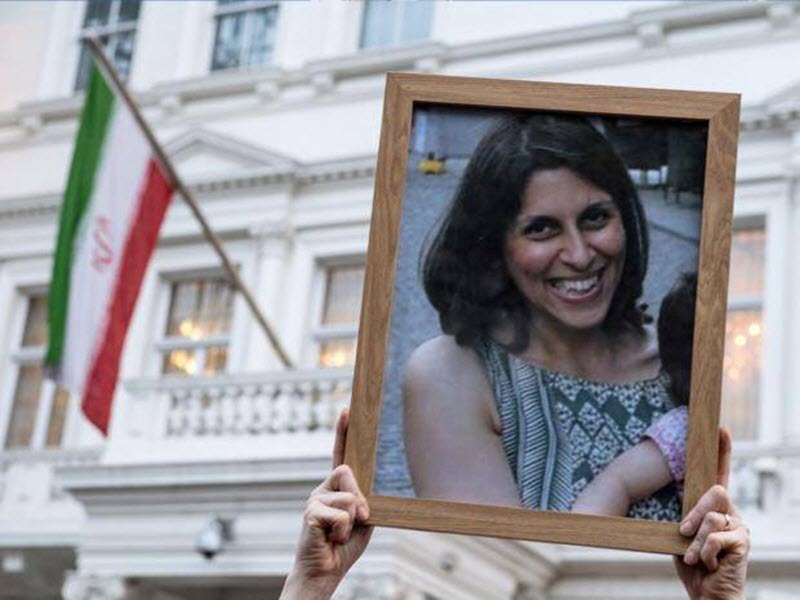 The news of a new trial date reiterates threats that had previously been levied against Zaghari-Ratcliffe and her family. It also happens to have emerged just ahead of a planned meeting in Brussels between Johnson, his Iranian counterpart Javad Zarif, and the foreign ministers of the other signatories to the 2015 Iran nuclear deal, from which the US withdrew last week. This has naturally reinvigorated accusations that the Iranian-British woman and other dual nationals are being used as bargaining chips by Iranian authorities.

In April 2016, Zaghari-Ratcliffe was arrested after she was accused of being involved in a vaguely-identified “infiltration network” tasked with facilitating the “soft overthrow” of the Iranian regime. The accusations were never supported with meaningful evidence, but appear to be based in part on her previous affiliation with the British Broadcasting Corporation, whose Persian service is banned by the Iranian government. However Zaghari-Ratcliffe had never worked for the BBC in a journalistic capacity, but was employed by its charitable wing before moving on to similar work for the Thomson Reuters Foundation, which employed her at the time of her arrest.

According to IranWire, even some Iranian officials and prison authorities have expressed sympathy for the detainee and have been judged to be sincere by her husband and other advocates in the UK. Following Johnson’s visit to Tehran, the head of Evin Prison even indicated that he had cleared Zaghari-Ratcliffe for release, only for the actual release to apparently be obstructed by higher authorities. And as IranWire notes, various reports over the past few months have suggested that this obstruction was motivated at least in part by the UK’s failure to settle an outstanding debt related to defense industry sales to the Iranian government prior to the 1979 revolution.

In January 2016, coinciding with the implementation of the Iran nuclear deal, four American nationals were released by Iran in exchange for the US releasing or dropping charges against 21 Iranians. The day of their release also saw the Islamic Republic receiving 400 million dollars in cash, ostensibly as the first installment of a 1.7 billion dollar repayment for another pre-revolution debt. This arguably set a precedent for the current pursuit of a similar settlement in exchange for the release of foreign nationals.

As well as motivating the Iranians to reinstate their threat to extend the sentence for Zaghari-Ratcliffe, this goal may also account for the arrest of two more British citizens and one permanent resident of the UK since the middle of March. But such arrests are also part of a much larger ongoing trend, with upwards of 30 dual nationals having been detained since the conclusion of nuclear negotiations. And these arrests defy the specific assurances granted by Iranian President Hassan Rouhani, the dual nationals would be able to return to their native Iran during his tenure, without fear of reprisal.

Rouhani has also made a range of other promises regarding domestic reforms and the establishment of greater civic freedoms in the Islamic Republic. But according to various human rights organizations and Iranian activist groups, the situation has actually deteriorated in many ways since his election in 2013. As such, the regime’s latest actions on the Zaghari-Ratcliffe case are indicative not only of the troubling situation faced by dual nationals but also of the situation faced by Iranians in general.

The practices of Iran’s judicial and political authorities have impacts not only on prisoners and the falsely accused but also on their families, and this fact has always been a clear feature of the Zaghari-Ratcliffe case. At the time of her arrest, she was traveling with her two-year-old daughter Gabriella, whose passport was subsequently confiscated. Thus, for the past two years, the young girl has been in the care of her Iranian grandparents, unable to return to her father in the UK or to see her mother outside of the context of brief prison visits.

At times, interrogators and prison authorities have reportedly sought to use the prisoner’s child and family to exert additional pressure on her, as by claiming that her husband was conspiring to have Gabriella taken away. Meanwhile, family members have been told that public advocacy for Zaghari-Ratcliffe would only complicate her case – a warning that is issued to the families of a great many Iranian political prisoners in hopes of limiting public awareness of politically motivated cases.

IranWire indicates that this threat was issued anew to Zaghari-Ratcliffe’s father after he spoke to the Tehran prosecutor’s office, seeking clarification of the reports of her new, forthcoming trial. Specifically, the father was advised to minimize media coverage and to avoid telling Richard Ratcliffe about the latest developments in his wife’s case. Nonetheless, Zaghari-Ratcliffe herself shared the information in a phone call to her husband, enjoining him to, “tell the world; enough of this nonsense.”

This is only one of many recent examples of Iranian authorities’ failure to enforce silence regarding political detentions and human rights violations. But of course this also means that the given case is only one of many instances of such violations. Some of those others are far worse, and some are fatal, but they have prompted significant outcry both internationally and within domestic activist circles.

On Tuesday, Iran Human Rights Monitor reported on new public statements issued by Fatemeh Mulayan, the mother of Sina Ghanbari, who is one of several individuals to have died in detention under suspicious circumstances in the immediate aftermath of mass protests that swept the country in December and January.

Ghanbari was found dead on February 5 and authorities were quick to announce that he had committed suicide. But fellow prisoners observed that he had been severely beaten in the days before his death, and now his mother has confirmed seeing signs of a broken skull and smashed left eye as his body was being hastily buried following its release by prison authorities.
The Iran-HRM report identifies six other individuals by name whose bodies also showed signs of torture despite the government claiming they had committed suicide. It also says that 5,000 people have been arrested in connection with the protests in January. But the National Council of Resistance of Iran has put the arrest figure around 8,000 and has found that at least 14 people were tortured to death in the weeks following the suppression of protests.

The NCRI also issued a report on Tuesday calling attention to the case of Bahman Varmezyar, who was executed in April on the basis of an armed robbery charge even though he had turned himself in for the crime, returned the stolen merchandise, and received forgiveness from the victims. The report explains that Varmezyar’s family was briefly led to believe that he had been pardoned after his mother and other relatives appealed directly to various authorities.

Though the motive for overturning the supposed pardon cannot be known with certainty, the details of the case point to the possibility that his sentence was implemented partly as a reprisal against the public discussion that was beginning to surround that case in the wake of the family’s advocacy. However, this is not to say that silence on their part would have been more effective. Indeed, many of those who avoid speaking to the media about their loved ones nonetheless find that authorities continue to exert pressure on the accused, or delay their cases indefinitely.

In some instances, these delays can result in the death of the accused, even in absence of a death sentence. The denial of medical treatment is a common means of exerting pressure on prisoners in the Iranian judicial system, even in situations where prisoners’ health concerns are life-threatening. This appears to be the case, for instance, with Afif Naeimi, a prominent Baha’i political prisoner who was returned to Rajai Shahr Prison last month.

The CHRI reported on Sunday that his term of imprisonment has technically ended but that the judiciary unlawfully extended his sentence by nine months to make up for his medical furlough. The judiciary’s own medical examiners have determined that he requires ongoing, specialized care that cannot be obtained in prison. Naeimi suffers from an enlarged heart muscle and is prone to losing consciousness, putting him in danger of catastrophic accident as well as potentially fatal effects of the illness itself.

Cases like these, whether motivated by revenge against the prisoner, his or her loved ones, or other factors, threaten to inflate the numbers of deceased Iranian prisoners, without actually bolstering country’s execution figures. Even so, Iran continues to maintain the highest per capita rate of executions in the world. Iran-HRM reports that four executions were confirmed as taking place on Monday alone, and Iran Human Rights notes that these were book-ended by hangings that were carried out in public – one on Sunday, and two on Tuesday.

Public executions are clear violations of United Nations human rights standards, and Iran’s transparent defiance of those standards arguably underscores the threat that ongoing detention poses to dual nationals and other persons with advocates in the international community.