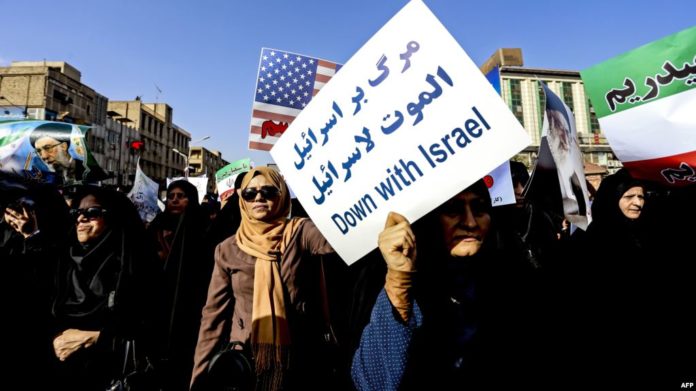 At a ceremony in April, the head of Iran’s Army, Major-General Abdolrahim Mousavi, said that the Iranian Regime has its “hands on the trigger and missiles are ready and will be launched at any moment”, according to Iran’s Tasnim News Agency.

Given that Donald Trump has since pulled the US out of the flawed Iranian nuclear deal, after intense Israeli lobbying, these statements could even be considered fighting talk.

After all, the Iranian Regime wants all of the benefits of international agreements (i.e. trade deals), but without ending its malign expansionism in the Middle East. Iran has claimed to be happy to cut its ties to the US and Israel, but as their economy freefalls, the mullahs will come to regret that.

It should be noted that the Iranian Regime is no stranger to using inflammatory rhetoric to rile up its supporters, who already believe that Israel and the US are the enemies and subscribe to the notion of a “Zionist agenda”. Iran has been threatening to destroy Israel since the mullahs stole power in 1979.

Some believe that the Iranian Regime does this in order to show its support for Palestine, which is certainly how the mullahs present it. Ayatollah Ruhollah Khomeini even instituted “al-Quds Day”, which is described as an annual protest of the Israeli occupation of Palestinian territory.

The problem is that this is just a smokescreen, as the Iranian Resistance has been pointing out for nearly four decades. Iran is using these symbolic gestures and anti-Israel threats to portray itself as a defender of Palestine and the Holy Land, in order to integrate itself into the Arab and Muslim world, as most people there are incensed by Israeli violations of Palestinian rights.

Most countries in the region have been fooled by Iran’s charade at some time or another, but we should all recognise that the mullahs don’t care about Palestine in the slightest. If they did, then Iran wouldn’t even think to sponsor attacks on Palestinian refugee camps in Iraq or starve en-masse Palestinians in Syria.

Instead, the mullahs fund Palestinian militant groups, like Hamas, who are as morally bankrupt as the Regime itself and force them to praise Iran.

Aside from not actually supporting Palestine, the mullahs have also secretly shared intelligence with Israel about Iraq’s nuclear research facility, which was bombed by the Israeli Air Force in 1981 as a result, and taken weapons from Israel during the Iran-Iraq War, even while publically condemning the Jewish state.

Tallha Abdulrazaq wrote on The Arab Weekly: “It is surprising to see people falling for Iran’s theatrics and its lies that manipulate and take advantage of the Palestinians’ legitimate struggle for self-determination… After decades of bluster, Iran has done nothing but talk and people are starting to wake up to the fact that the mullah regime does not care one jot for Palestine.”