Many towns are still in super-crisis state and rescue workers are trying to save as many people as they can, but are too often being stopped by the mismanagement of the Regime. Even state-run institutions like the Revolutionary Guard Corps (IRGC) are admitting it, although it should be noted they are doing so for factional gain, rather than genuine concern.

The commander of IRGC ground forces Mohammad Pakpoor said that “there is no management” in the rescue and aid operations, adding that “no government official would dare” to show up in the areas where “conditions are bad” because the “people are in a rebellious mood”. 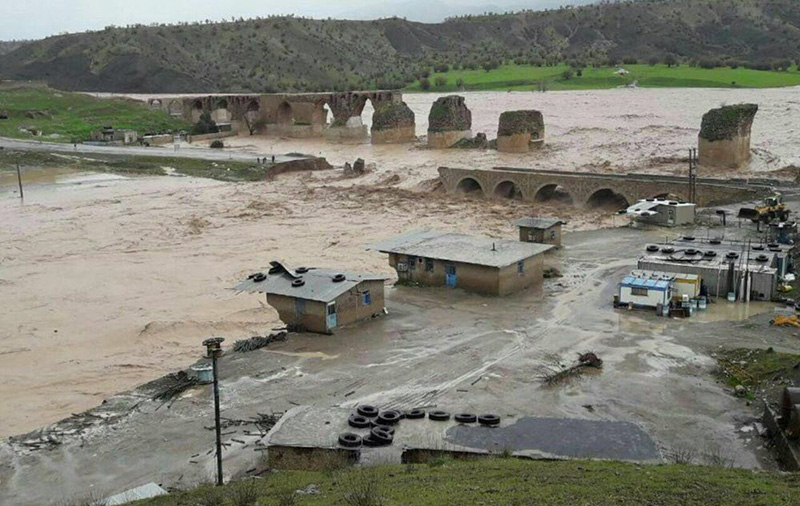 He said: “They said for two or three days that the flood is coming, evacuate, without any foreground without, for example, giving them a tent, now they evacuate, where to go, go on a mountain which is cold, now water has taken everywhere, there is no road, only an open gas road … Many villages, most of the villages have no road, there’s nothing, only with just a helicopter, some food is taken there… Electricity is cut off because all cables have fallen.”

On Monday, after all, communication and road connectivity was lost with the town of Pol-e-Dokhtar, Lorestan’s governor predicted “a great human tragedy” if rescue workers and aid were not sent. (Indeed, videos and photos from early in the day showed that two-thirds of the town was under several feet of water.) While rescue workers were sent, there has not yet been any information about possible casualties.

All rivers in Lorestan have breached their banks, while the Marook dam is also overflowing. In the capital, Khorramabad, the water levels have reached nine feet.
The local MP Mahmoud Sadeghi tweeted the vice president for help.

He wrote: “Mr Jahangiri please come to the rescue of Lorestan province. Connection has been lost with a few towns and cities. Defenceless people are besieged by floods. All officials who are contacted say they cannot do anything”.

Other areas of Iran in a state of emergency over the floods include:
• Khuzestan, where over fifty villages have been evacuated and two major dams are completely full
• Shush, where 30 villages in the area were evacuated
The Alborz mountain range, where melting snow is adding to the rising river waters
Many roads and railway lines are now impassable all across the country. Over 200 are thought to have died.

Iran: Regime Collapse Is the Mullahs’ First and Foremost Concern

Iran: Officials’ Warnings Foretell of the Prospects for Regime’s Demise

Outbreak of Crises and Conflicts Within Iran’s Regime