The Iranian regime has banned the Fire Festival since 1978. Every year many Iranian citizens, especially the youth, are assaulted and arrested for participating in the festival. Despite suppressive efforts by Regime forces, this year the festival was celebrated by scores of residents across the country as an act of protest toward the repressive regime. These celebrations and protests turned to violence in many areas of the country.

In the city of Najaf Abad (Isfahan province), fights broke out between residents in the Amirabad district and State Security Forces agents. The agents used pepper spray, batons and electric Tasers in the clash. 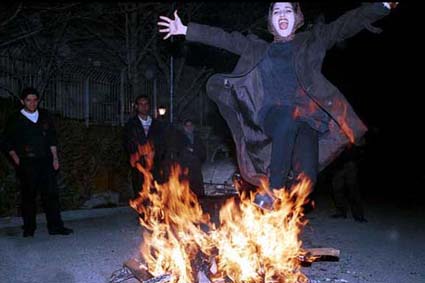 In Tehran, many efforts were made to stop the people from celebrating the Fire Festival. In Yaftabad region, regime security agents responded to trash bin fires and use of firecrackers and they were met with resistance. Residents badly beat up agents who were trying to interfere with the night’s festivities.

Later in the evening, in Tehran’s Third Falakeh, the regime cut off electricity in some neighborhoods so that no one could film people participating in the festival or the regime’s heavy-handed response. In Parvin Boulevard, regime agents used their batons to disperse gatherings. In Abbasabad and Sohrevardi Streets, agents wore bulletproof vests and drove motorcycles to break up celebrations.

In Komeil Street, more than 100 police officers clashed with the festival participants. One police officer dealt a vicious blow to the head of an 18-year-old youth, rendering him unconscious and soaked in blood. Police then threw this injured protestor in the bed of a pickup truck and took him. People chanted “Death to the dictator” as police drove away with the injured protestor.

In AriyaShahr, Valiassr Street, agents clashed with gatherers and confiscated their cameras. Fifteen residents were arrested. In one of the more striking images of the festival, in Salsabil Street, western Tehran, the youth set fire to pictures of the regime’s President Hassan Rouhani.

Every year the regime attempts to intimidate the Iranian people from celebrating the Fire Festival, and every year residents ignore these threats and participate anyway. Maybe one day the regime will realize it is not their place to dictate where, when, and what the Iranian people celebrate, but that day does not seem to be near.