While government forces were able to suppress the turn of the year uprising, protests continue in Iran. As well, problems within the Iranian regime suggest that it is vulnerable.

Former president Mahmoud Ahmadinejad expressed his concern for the regime’s future in a letter to Iranian supreme leader Ali Khamenei. Ahmadinejad described the letter to university students in late February as “delineating a new horizon to walk out today’s complicated and obscurant conditions of the country.”

Former deputy parliament speaker Mohammad Reza Khatami took a similar stance in an interview with a local newspaper. “The root of problems and present events are ourselves. We shouldn’t let the situation get to this point,” he said, adding, “I consider the demonstrations an indicator of total discontent. People do not accept this process anymore[.] … A demonstrator who chants certain slogans is fed up with the system and breaks it.”

Khatami and Ahmadinejad are not the only ones. Government analyst Hossein Raghfar told semi-official ISNA news agency, “According to the statistics taken in recent years, with the standards of the World Bank, 33% of Iran’s population live at ‘absolute poverty’.” He continued, “Due to the high costs of medical services, 7% of Iranian families have fallen under the poverty line in one year alone. This means that a family’s income is not sufficient for the family’s nutrition while they have other expenses, such as transportation, clothing, and accommodation.”

The price of the U.S. dollar and other currencies in Iran have escalated exponentially in the last 40 years. The dollar, about 100 rials four decades ago, is now sold in Tehran’s banks for over 6,000 rials. However, it’s reported that the unofficial ‘street rate’ is over 42,000 rials.

Ebtekar newspaper published an article on April 8th explaining the views of an analyst close to the regime. It concludes, “We are now on the verge of a crisis. For this we are in need of an immediate national salvation.”

Meanwhile, Khamenei has named the new Iranian year as “the year of supporting Iranian-made commodities.”

In cities across Iran, anti-government demonstrations are expanding. Many question if there will be a regime to celebrate the Islamic Republic’s 41st anniversary, or if the people will succeed in overthrowing it. 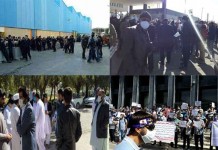 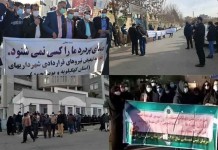