INU – Australian Senate  debate on Tuesday, 12 November about the situation of resident of Camp Ashraf and a series of hunger strikes have taken place across the world specially in in Melbourne.
Following is a partial speech of Senator Moore:

This evening I want to talk about a group of strong people, a small group of people, who have been on a hunger strike outside the DFAT buildings in Melbourne since 19 September. 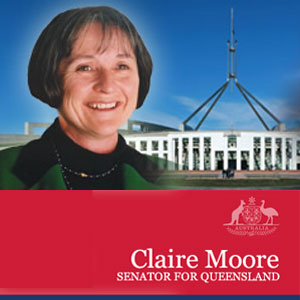 These people are friends, family and supporters of the PMOI, the People’s Mojahedin Organisation of Iran — and I can spell that later. The PMOI has had a long history of discrimination and horror. They have sought freedom and they have actually had a very destructive time since about 1986 when the PMOI moved a lot of their people from Iran, where they were living with discrimination under that regime. They moved to Iraq under a promise of freedom, and moved to a place which became well known as Camp Ashraf.

This camp was situated outside Baghdad, and since 1986 the people there had built up a real city. It was not just a camp, it was a city which had schools and generations of people working together. That particular city has been under threat from the current Iraqi government for several years. So whilst there has been ongoing debate and discussion, people from Camp Ashraf have been moved from their place of sanctuary under a promise from the UN that they will be protected. They have been taken to another location with the expectation that they would then be able to seek a new home elsewhere and given UNHCR protection, but being encouraged to move because they were no longer welcome nor safe in Iraq.

The situation continued to get worse because over a number of years, particularly since the Americans left Iraq, there have been a number of serious attacks on Camp Ashraf, and the people knew that they were not safe. Australian citizens of Iranian background who are living here have been fearful for their families’ safety, and they have been persistent and strong advocates for our government, amongst many governments, to take some action to give safety to the people who were now clearly in danger. The people have been visiting this parliament and visiting parliamentarians for several

years. I want to pay my respects to their strength, that they are prepared to come to talk to people from all parties to raise awareness of the situation and to talk about the fact that they feel as though they have been betrayed because they put their faith in the coalition that had moved through the Iraq war process and promised them that they would be safe.

On 1 September this year a particular situation occurred which has caused greater urgency. The UNHCR has released a statement about the attacks on 1 September which reads:

According to reports reaching UNHCR, seven individuals formerly residing in Camp New Iraq disappeared from the Camp on 1 September, are being held somewhere in Iraq and may be at risk of being returned involuntarily to Iran. These seven are all known by UNHCR to be asylum-seekers, and the agency hopes to have an opportunity to interview them. In light of the numerous and persistent reports over the past week that these individuals may be at risk of forced return to Iran, UNHCR calls upon the Government of Iraq to locate them, to ensure their physical security, and to safeguard them against return to Iran against their will.

We know that these people have been found in various prisons in Iraq, all under immediate threat of being removed to Iran.

As a result of the fear, a series of hunger strikes have taken place across the world. Iranians in Camp Liberty, which is the new location in Iraq, and in five countries, including Switzerland, England, Germany, Canada and, from the middle of September, Australia, commenced a hunger strike, calling for the release of seven Camp Ashraf residents being held hostage by Iraqi forces. Among those on hunger strikes are fathers, mothers, families and friends of people who are now living in Iraq. They seek assurance that that their friends, their families and their people are safe, and that they will continue to be treated as real refugees, with hope of being able to find a new future.

The hunger strikers in Melbourne include Mr Janhangir Hosseini, his wife, Zeinab, Roy Adel and my friend Mohammed Sadeghpour. The protest has been taking place outside DFAT in Casselden Place on the corner of Lonsdale and Spring streets in Melbourne. The people are peaceful; they are not allowed by Melbourne council rules to erect any buildings or shelter. They are simply there making the statement. It is a number of days that these people have been on hunger strike. We believe that now people are deciding to move away from hunger strike. We do not know, because emotions are running very high. They are seeking support to have their international message heard.

A number of us have been raising this issue with the Australian government for years. But we think that the issue has created more urgency recently. I just want to note a quote from an email. Mr Sadeghpour, who has been such a good friend, says that he will continue his striking until the seven people are released. I quote, ‘We are struggling to get them out as soon as possible because if they are deported back to Iran, they will face torture and execution’.

We know the history of human rights in Iran. We know that there is indeed a culture there which does have execution as a common result of any crime and, certainly, the PMOI are considered to be enemies of the state in Iran. So removing people from this organization back to Iran is in effect signing their death sentences. The people who are taking hunger strike action in our city of Melbourne are Australian citizens. They care about their families back in their homeland, but they believe Australia is their home and they are turning to us to make sure that we are part of international spokespeople who can talk through the UN to commit to ensure that people are safe.

These people are brave, they are calling for our assistance, and I believe that we as Australians do have a responsibility to ensure that their friends and family are not subject to execution and torture. We know that we will continue to have discussions both at the national level here and internationally, but we do not have the right to turn our backs on my friend Mohammed and his friends, who are only trying to keep their families safe. I commend their actions. I do not know whether I would have that strength; in fact, I know I would not. But I do think we should listen, understand and keep this message alive.