When asked what she would say to the seven captured from Camp Ashraf she responded, “If I could speak to the seven hostages, my message is that we will stand strong until the last moment.  We will continue our hunger strike until you are free!”

She also called on President Obama, the United Nations and the European Union to step up and address the situation.  She said it is no longer acceptable to sit back and ignore the horrible tragedies that are occurring.  “If anything is to happen to any of the hunger strikers – the responsibility falls on the U.S.,” she said. 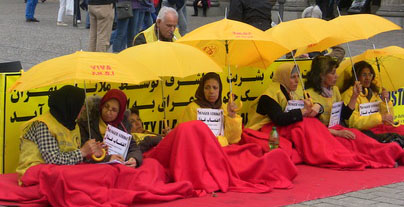 Saremi escaped Iranian prison in March 2011 and joined NCRI in April of the same year.  She escaped after arranging her husband’s memorial ceremony.  Her husband was a political prisoner for 27-years and killed by the Regime.

In 2009 she was an organizer of the infamous election protests and transferred video clips and news to outside organizations, avoiding the strict government censorship.  Several of her friends are in Iranian regime prisons and on trail for Moharebeh (waging war against god).

NCRI will continue to host live Twitter chats in the coming weeks. Join in the conversation by following @Iran_Policy and #FreeThe7 on Twitter.