Investigative magistrates of the Paris Prosecutor’s Office dropped all charges against members of the Iranian Resistance, last week putting a definitive end to the case that was opened against them as a result of a political commercial deal with the ruling mullahs in Iran more than a decade ago.  This dossier was one of the biggest and longest running investigations in the recent history of France.

The victims of this ordeal, the witnesses, and those who were affected by the injustice of this behind-the-scenes deal, including representatives from throughout Europe took part in a celebration party and conference in Paris this afternoon.

Information was presented regarding direct meddling of the Iranian regime in this case, and a discussion took place detailing the future prospects for the Iranian resistance now that the case has been closed.

Prominent lawyers including William Bourdon; Patrick Baudouin, and Bernard Dartevelle, and various French dignitaries attended to discuss how the West’s experiences with this case can be applied to improving its policies with respect to the Iranian regime – a regime that is recognized as the main sponsor of terrorism and fundamentalism in the world, and a continual source of deep concern for Western interests.

First to speak during the press conference presentation was French lawyer, William Bourdon. He virulently attacked the original prosecuting judge Jean-Louis Brugière, calling his action “a judiciary fiasco” leading to his and many other prominent lawyers taking up the defence of the Resistance party.  Bourdon also blamed the French Interior Minister at that time – Nicolas Sarkozy for the responsibility of the groundless intervention of 1300 police and he stated that the whole attack was purely for political and commercial reasons. Bourdon went on to say that the justification for the raid – terrorism was “detestable relentless harassment” 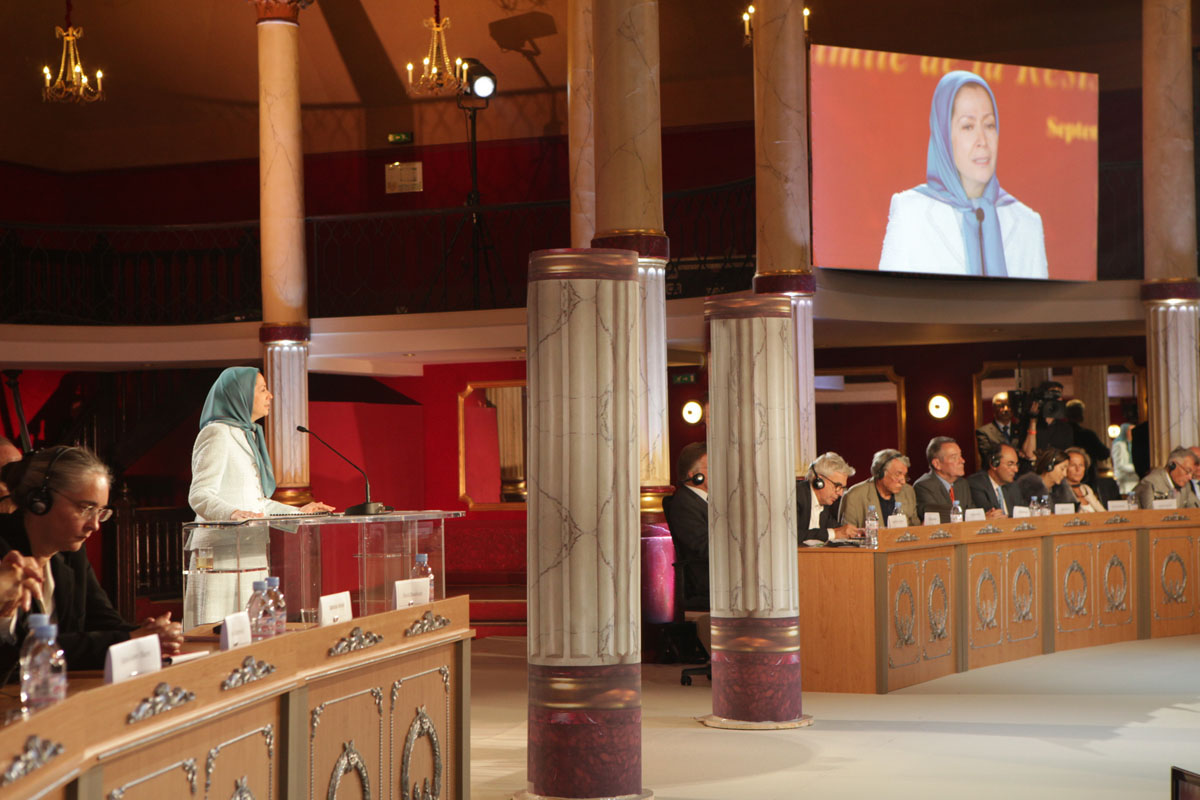 Thanks to the continuous efforts of the Resistance’s lawyers, a new independent judge was named in order to restore honour to the group.  The prejudice was considerable and Bourdon described the Resistance slogan as “responsible opposition versus tyranny”. Meanwhile in Iran torture and assassinations continue. In the name of Human rights he addressed Mrs Rajavi saying that the French judiciary will continue their support for the Resistance and its members.

During the Conference spokes persons claimed that cooperation now with Iranian regime on the pretext of confronting ISIS, is a lethal political blunder that will fan the spreading of terrorism and fundamentalism

Maryam Rajavi, President-elect of the Resistance, called the collapse of the French prosecution dossier a victory for justice and resistance, a defeat for the demonizing campaign, as well as an accomplishment for all of humanity facing tyranny and fundamentalism. She said:

“In this dossier, the French judiciary became a tool of the mullahs’ regime, but now, as Henri Leclerc put it “the French public prosecution service showed that it can refrain from kowtowing to political considerations”. It is time for the French to save their politics, diplomacy and intelligence services from the poison of the Iranian religious dictatorship. It is time for France to show firmness and dismantle the Iranian regime’s network of agents and IRGC’s front companies and organizations in France and Europe.

The crime of those who opened an empty dossier in collaboration with the mullahs to destroy the Iranian Resistance is not just breaking the law and undermining justice or even abusing the judiciary, their real crime was to pave the way for the demon of fundamentalism. She underscored: The mistakes of French and other Western governments in the past years has led to the catastrophic diversion we are now facing of having to combat ever increasing terrorism. The inception and growth of extremist groups such as ISIS is a direct consequence of years of appeasing its Godfather – the regime of Velayat-e faqih.

Building up empty and discredited dossiers against the Iranian Resistance which is the anti-thesis and viable alternative to fundamentalism was the greatest incentive to this regime to incessantly sow the seeds of al-Qaida and ISIS and etc…..in the entire Middle East and Africa, particularly in Iraq, Syria, Lebanon, and Yemen, in the past three decades. 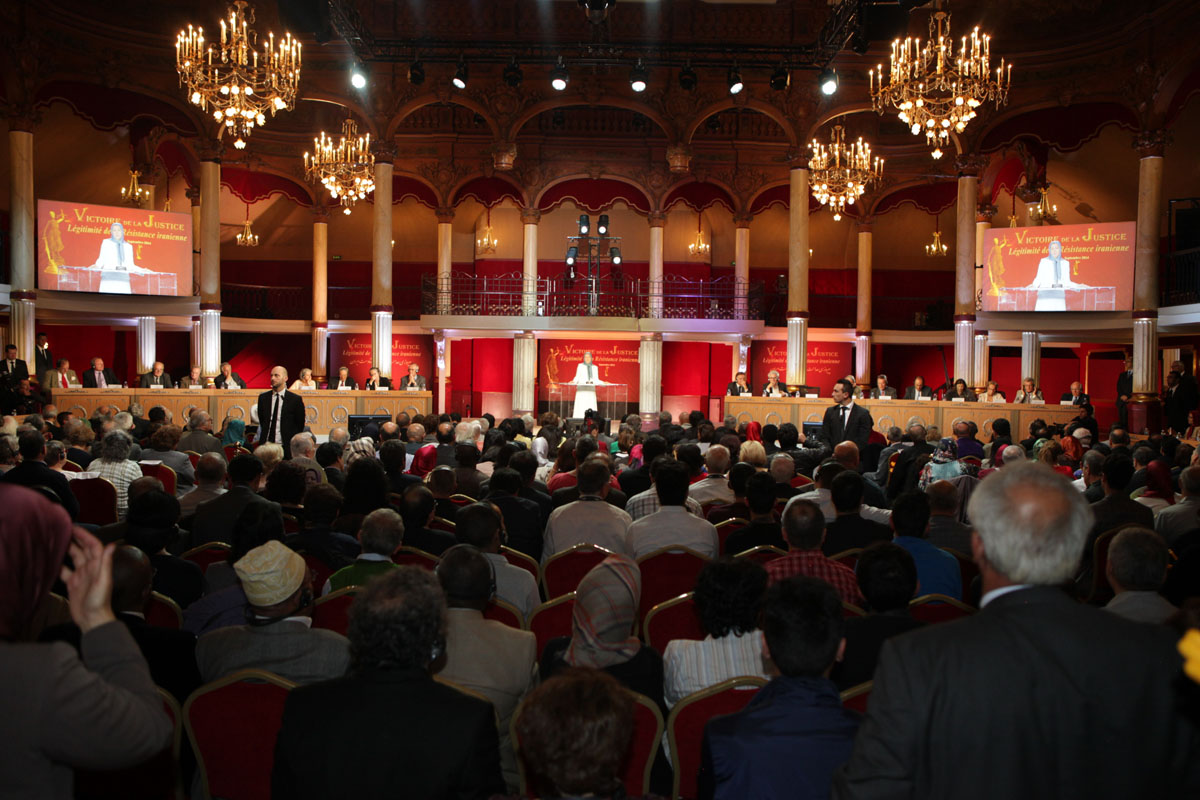 A video message by Henri Leclerc, a prominent French jurist and lawyer of Mrs. Maryam Rajavi, was played to the conference which included:

Later during her speech, Rajavi welcomed France’ commitment to attempt to resolve the Iraq crisis and to confront ISIS and warned the parties who insisted on giving the Iranian regime a share: “You are falling into the mullahs’ trap; instead of containing the crisis in Iraq this shall enflame a Shia-Sunni war and rebuild the Iranian regime’s domination in Iraq. The anti-thesis of Velayat-e faqih, and the fundamentalism and barbarism it has created is the democratic Islam that is represented by the People’s Mojahedin Organization of Iran; a tolerant Islam removed from compulsion, intimidation, beheadings, and despotism whose message is brotherhood, equality, forgiveness, and justice.

Rajavi called on the French government to assume the leadership of a humanitarian initiative to provide the minimum requirements to guarantee the safety and security of the freedom fighters in Camp Liberty until all of them are transferred out of Iraq. She called on the French government to support the complete annulment of the inhuman siege on Liberty, especially its medical blockade; to end the prison-like conditions in Liberty; and to have this camp that is nothing but a prison, be a refugee camp under the United Nations’ supervision. She said that the Iranian people want France to stand with them, rather than the religious dictatorship.