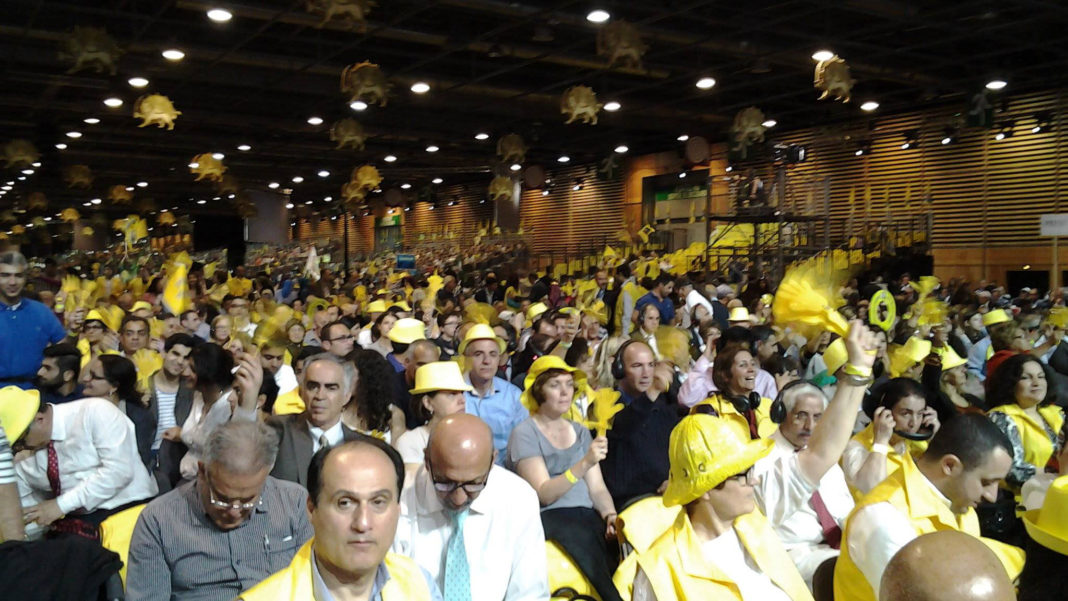 Headphones on the seats provide an opportunity for young shared understanding of speeches that will be delivered in eight different languages, to people from as many as 69 different countries, nearly all of them exiles or the parents of exiles from the Iran of Ayatollah Ruhollah Khomeini and his successor Ali Khamenei.

The setup of this event has been a labor of love for hundreds of members of the National Council of Resistance of Iran, and one that is surely appreciated by the tens of thousands of members and supporters who attend throughout the day. Standing alone the side of the massive space, one can watch the crowd develop as the completion of the work that had begun days earlier.

“We have been watching things develop for a week,” said a young event organizer. “When we came in there was nothing.” The space stretches approximately 700 meters back from the stage, where attendees will watch the speakers on large monitors mounted around the sides of the venue. None of the electronics, staging, or scaffolding was in place before the setup began; neither was the central seating.

The rapid growth of the temporary infrastructure is an impressive display of the NCRI’s resources, in light of the fact that the group is entirely funded by donations from its members, without government or corporate support. One NCRI member commented on this organization of the group by saying that it is “a truly grassroots movement,” and “the last remaining true democracy.”

The group’s membership is surely devoted to its cause, to the leadership of Maryam Rajavi, and their shared identity as a resistance organization. Many people who were driven out of Iran in the years following the Iranian Revolution ended up scattered far away from friends and family. In many cases, NCRI membership has filled in that gap with local communities that handle a portion of finances in order to organize mass bus trips that bear members to Paris every year from places as far away as Scandinavia, while others fly in from North America, Australia, and all over the world.

The annual Iran Liberation rally, identified this year by the moniker, “All for Freedom,” is a rare and much anticipated coming together for the members of these local communities, and for long-fractured families. In some cases, sibling members of the organization see each other only once a year, when they come together in common cause for the establishment of freedom and democracy in a home they left long ago.