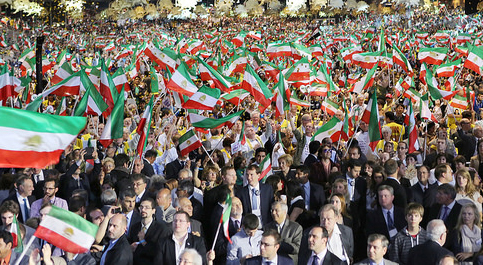 • Iran and the International community: An acceptable Nuclear agreement– Steps that Tehran needs to take in order to ensure it will not acquire a nuclear bomb

• Iran – A year after Rouhani: Change or Tehran’s efforts to prevent downfall?

• Tragic and deteriorating situation of human rights in Iran during Rouhani’s tenure and international community’s responsibilities.

• The need for protection and safety of Iranian refugees in Camp Liberty, Iraq.

As the deadline nears for a comprehensive agreement between the world community and Tehran on the mullahs’ nuclear weapons program (on July 20), and a year after ‘election’ of Rouhani as president of the  regime, Iranians from all over the world will meet in a grand gathering in Paris on June 27.

Nearly 100 political dignitaries, 500 parliamentarians from the US, France, Europe, Canada, Australia, Arab countries, and the Middle East, who represent a divergent spectrum of political tendencies will participate in this event.

In addition to the main meeting, the gathering will include several side events focusing on particular issues.

Iranians and hundreds of international dignitaries will announce acceptable predicates for a nuclear agreement, in particular the necessary steps that mullahs have to take  to ensure Tehran will not acquire a nuclear bomb.

A year after Rouhani took office, the Iranian community and international personalities will provide Rouhani’s track record in various areas, including the scope of repression in Iran, deterioration of human rights, as well as the trend of future events in Iran and also the policy of the West vis-a vis Tehran.

The participants will demand guarantees for the safety and security of the Iranian refugees in Camp Liberty Iraq – who are protected persons under the Geneva Conventions. Iraqi government and the Iranian regime’s agents have attacked the refugees several times  at the behest of Tehran.