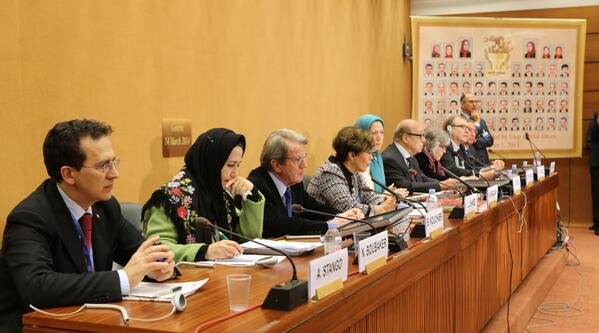 The conferees strongly condemned the attacks of the Iraqi government, acting at the behest of the Iranian regime, against Iranian refugees in Camps Ashraf and Liberty in Iraq. They cited the fact that more than 100 refugees have been killed, many more wounded, and seven taken hostage, six of them women. In addition, conditions at Camp Liberty, which they said were almost subhuman from the start, have become even worse.

They urged an independent, comprehensive and in-depth investigation about these “crimes” by the UN, and cited a UN report of September 3 stating that “all killed suffered gunshots, most of them in the head and upper body, and several of them have been handcuffed. The conferees described Camp Liberty, where the inhabitants were forcibly moved more than two years ago, as a prison and urged speedy relocation of all the residents, even temporarily, to Europe or the U.S.

Mrs. Rajavi asked the international community, especially the US and the EU, and the UN to refer the dire situation of Camp Liberty to the UN Security Council.

Speakers at the conference strongly condemned Iran’s deteriorating human rights situation during Rouhani’s presidency, including the execution of at least 176 people since the beginning of 2014, and urged the Security Council to act on this issue. They based their action on the Secretary General’s report to the UN Human Rights Council on March 11 that “Iranian President Hassan Rouhani has failed to fulfill campaign promises to allow greater freedom of expression and there has been a sharp rise in executions since his election.” 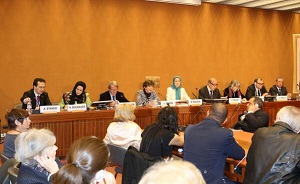 There also was discussion about the nuclear talks between Iran and the West and Iran’s meddling in other areas, but the prime focus was on the refugees at Camps Liberty and Ashraf. The conferees agreed that the situation has become more intolerable every day, and they feared more attacks and more deaths if the international community does not act speedily.