Home News Iranian Opposition Iran: Happy Nowruz to all of you 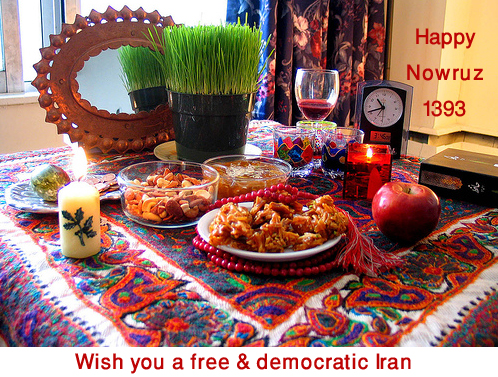 Nowruz, that marks the beginning of Spring, is celebrated by people from diverse ethnic communities and religious backgrounds for thousands of years. It is a secular holiday that is enjoyed by people of several different faiths. It originated in Persia in one of the capitals of the Achaemenid empire in Persis (Fars) in Iran and is also celebrated by the cultural region that came under Iranian influence or had migrations by Persians including Azerbaijan, Kurdish inhabited regions of Turkey, Iraq and Syria, Western Afghanistan, Tajikistan, Turkmenistan and Uzbekistan and other scattered populations in Central Asia. The distinct culture based on the language, food, music and leisure activities that developed among the many people and ethnic groups who lived in this area are known as Persians.

Nowruz is partly rooted in the religious tradition of Zoroastrianism. Among other ideas, Zoroastrianism is the first ever monotheistic religion that emphasizes broad concepts such as the corresponding work of good and evil in the world, and the connection of humans to nature.

The UN’s General Assembly in 2010 recognized the International Day of Nowruz, describing it as a spring festival of Persian origin which has been celebrated for over 3,000 years.

Once again, happy Nowruz from all of us at Iran News Update.