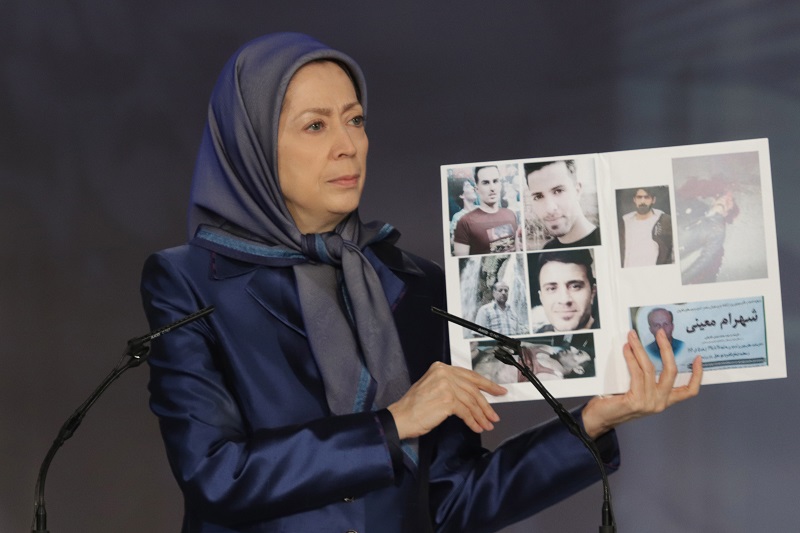 Here, we will look at Maryam Rajavi’s speech.

Maryam Rajavi said that the martyrs’ sacrifice “inspired and reinvigorated” the Iranian people in their fight for freedom and that she sent her “sincerest and heartfelt condolences” to those who had lost loved ones in the regime’s crackdown on the protests. She also encouraged the people of Iran, especially the youth, to fight on, as they have been since before the mullahs came to power in 1979.

Then, Maryam Rajavi gave a short history of the Resistance, citing that it started officially on June 20, 1981, after the regime’s Revolutionary Guards opened fire on 500,000 young people, who had gathered at a rally in Tehran to hear the leader of the Resistance Massoud Rajavi speak.

The Resistance continued in spite of the crackdown, even as political opposition was banned, even as 30,000 political prisoners were massacred in 1988, and even as the Regime attacked the Resistance camps of Ashraf and Liberty in Iraq.

Maryam Rajavi said: “Throughout this 40-year struggle, countless number of my [Resistance] sisters and brothers and my fellow combatants have been slaughtered, executed or massacred by the mullahs. So, please remember that the Mojahedin and members of this Resistance feel your pain and suffering from their hearts and souls. But you must also know that these martyrs are still alive because they are eternal. They are the flowers of a rebellious generation. They burst into life out of the sacred will and determination of an arisen nation. They are the harbingers of freedom in Iran.”

She urged the Iranian people to hold their heads up and be proud of the martyrs and of the protests that have shaken the regime to its core.

Maryam Rajavi then discussed the November 2019 uprising, noting that over 1,500 people were killed by the regime; a figure 60 times higher than of those killed during the December 2017-January 2018 uprising. She advised that the number is likely much higher, but this is being covered up by the regime, amounting to “one of the most horrific crimes of the 21st century”.

Maryam Rajavi spoke about the mullahs’ murder of 13 and 14-year-olds, giving a partial list of the young people killed by the regime during the protests.

Maryam Rajavi then spoke about the brave women who were taking to the streets in protest, even becoming martyrs as well.

She said: “Their valiance and audacity instilled fear in Khamenei’s Revolutionary Guards, so much so that they repeatedly acknowledged the significant role of women in the uprising. Hail to these brave heroines.”

In our next piece, we will look at Maryam Rajavi’s belief that the regime’s crackdown signals its end.