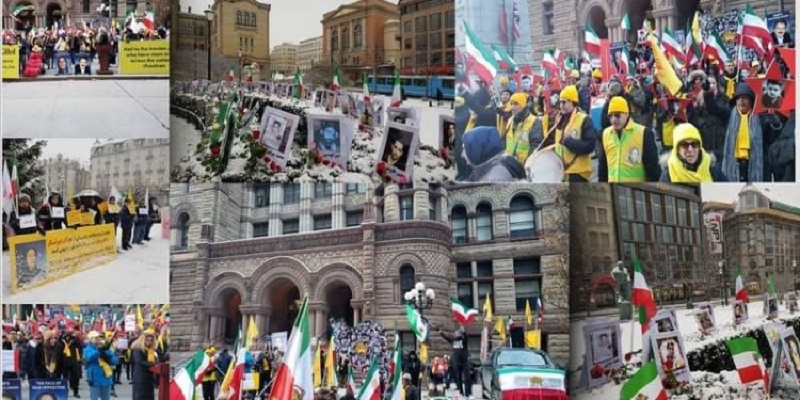 The MEK supporters’ rallies on Saturday, December 28, gave Iranian-Canadians a chance to show their solidarity with the Iranian protesters and especially those killed by regime forces, many of whom are women and children.

The MEK supporters’ rallies, held on the 40th day of the Iran uprising, were attended by hundreds of people because it is traditional in Iranian culture to mourn the dead on the 40th day after their death. (Due to the secrecy of the regime, many families do not have an official date of death and were forced to mourn them 40 days after the protests began.)

At one of the MEK supporters’ rallies, Roger Lyon, the former chair of the MSF Trade Union, urged the world the end their silence on the crimes against humanity that the regime is committing in a desperate attempt to end the protests.

In Iran, members of the MEK’s Resistance Units have been taking part in a major campaign to encourage more rebellion by the Iranian people and show them that they are not alone in their hatred of the regime.

The MEK supporters put up posters of the MEK leaders with slogans like:

The MEK Resistance Units are risking their lives to do this because support for the MEK in Iran is punishable by death. However, the MEK supporters in Iran are not afraid. In fact, they are more terrified that the regime will continue. They see the freedom of their country as something worth the risk.

This is what scares the mullahs and is why the regime has cracked down so hard on the protests. However, they also fear the consequences of being found to have committed crimes against humanity, which is why they are doing their best to conceal the crimes. Most notably, the regime has stolen the bodies of murdered protesters from hospitals and the streets. They’ve also refused to give the relatives of arrestees or murder victims and information about them.

On December 29, the MEK released the names of 14 more martyrs of the uprising, which meant that, as of that date, 615 of the 1,500 had been identified.

The Iranian uprising, where hundreds of thousands of people across Iran are demanding regime change and the overthrow of Supreme leader Ali Khamenei, began on November 15 because of the tripling of fuel prices overnight.

The protests quickly spread to all of Iran’s provinces and the regime’s Interior Minister Rahmani Fazli has admitted that the protesters destroyed at least 50 police and army centers, 140 government centers, 183 police vehicles, nine seminaries, 731 state-affiliated banks, and 70 gas stations.