In truth, however, there is a home-grown and formidable alternative to the regime. The overthrow of the religious dictatorial regime in Iran is not only inevitable but increasingly within reach. The democratic alternative has a history of standing by democratic ideals and values and paying the utmost price in the pursuit of freedom. That is why experiences resembling those of Libya or Syria are not realistic when it comes to Iran. As Mayor Giuliani says:

“…let’s make it clear, if we have to say it over and over again and prove it, there is an alternative to this horrible regime of terror. This isn’t one of those situations in which we have the choice of deposing a horrible dictator and we don’t know if a more horrible one will come along. Right? And when we saw that happen, we saw it happen in Egypt, in some ways we saw it happen in Libya where Qadhafi was there…”

The National Council of Resistance of Iran (NCRI) is an umbrella organization that serves as the democratic alternative to the current regime ruling Iran. The NCRI was formed by Massoud Rajavi, Leader of the Iranian Resistance, in Tehran, Iran, on July 1981. The PMOI/MEK is the pivotal force within the NCRI.

The sections below outline why the NCRI is a viable alternative to the clerical regime in Iran.

A long history of struggle against religious fascism

Despite brutal oppression over the past four decades, the NCRI and MEK have firmly stood by their principals, freedom, and democracy for Iran. The execution of 120,000 supporters has been executed by the regime, demonstrating the heavy toll that the democratic alternative has paid thus far for freedom. Neither internal suppression by the mullahs nor external pressures (e.g. a foreign terrorist organization listing that led to the bombardment of MEK bases during the invasion of Iraq by the US) have forced the NCRI and MEK to back down of their struggle for freedom in Iran. The existence of a resistance movement with a track record of almost half a century of struggle is unparalleled in Iran’s contemporary history.

In 2002, the NCRI and MEK revealed, for the first time, the vicious ambitions of the mullahs to develop nuclear weapons.

In 2017, 23 former U.S. officials and dignitaries, including John Bolton, Newt Gingrich, Rudy Giuliani, General James Jones, and Senator Joseph Lieberman, among many others, wrote in a letter to President Trump:

“History aside, no one disputes that the resistance effort since 2001 has been entirely political in nature, including discovering and revealing Iran’s secret nuclear weapons program in 2002 – an act for which President George W. Bush publicly credited the resistance.”

The MEK is the most organized movement in Iran’s recent history. On June 1981, just two and a half years after the Iranian revolution, the MEK managed a rally in Tehran in which half a million people participated. Now, Resistance Units affiliated to MEK, are active in almost all of Iran’s 31 provinces.

Dr. Maria Ryan, CEO of Cottage Hospital and a woman’s rights activist, said at an international conference in Ashraf 3: “You’re really organized. And that’s important for people to see because as we move the regime out in Iran, it’s going to take a lot of work to put up a government and stand it up. And this is how I feel your strength is coming through — you’re thinking about the future, you’re organizing and you’re disciplined. I’m very impressed by this.”

The MEK’s historical leader, Massoud Rajavi and the NCRI President-elect, Mrs. Maryam Rajavi, have courageously led the Iranian movement to achieve its current international standing after four decades of some of the most difficult challenges. The pivotal role of the MEK’s leadership is undeniable for every Iranian observer.

A clear platform for future

Having a practical and realistic platform for the future is the main difference between the NCRI and other fake or pseudo-alternatives.

The NCRI has unanimously approved four major plans for future Iran that form the backbone of its policies and positions. These plans can be found in the annex to this guide (Women’s Plan, Peace Plan, Kurdish Autonomy Plan, and Provisional Government’s Relations with Religions and Denominations).

The 10 Point Plan of Mrs. Maryam Rajavi, the President-elect of NCRI, outlines a roadmap for a free, democratic, secular and non-nuclear Iran.

A coalition of democratic forces

The NCRI is described as Iran’s Parliament-in-Exile. It is an inclusive and pluralistic parliament in exile. NCRI membership includes political figures representing a broad spectrum of political tendencies in Iran, as well as representatives of ethnic and religious minorities. The NCRI aims to establish a pluralistic republic in Iran, based on the separation of religion and state. Women comprise 52 percent of the Council’s members.

The popularity of the MEK has triggered alarm and panic among Iranian officials, including its Supreme Leader, Ali Khamenei. They have repeatedly and publicly acknowledged this fear. Despite the regime’s brutal suppression and 120,000 executions, the mullahs have not been able to annihilate MEK over the past four decades. Instead, they witness the growing influence of this organization day by day both internally and internationally.

The NCRI has garnered extensive international support since its formation in July 1981.

The international community, particularly members of the US Congress, political dignitaries, parliamentarians in Europe, and many Arab personalities have joined a broad campaign in support of PMOI/ MEK members in Iraq. These members relocated to Albania in 2016. The US Congress, in particular, passed a bill that was enacted into law, urging the US Government to adopt certain measures for the protection of the residents. An EDM in the UK Parliament in 201 0 stated: “That this House expresses concern at the oppression of 3,400 members of the People’s Mojahedin Organisation of Iran (PMOI) including 1, 000 women residing in Camp Ashraf in Iraq as protected persons under the 4th Geneva Convention.” Another EDM in 2014 “urges the government of Iraq to lift the current inhumane siege on the camp, recognizing this camp as a UN refugee camp and guarantee the safety, security and the rights of its residents.” 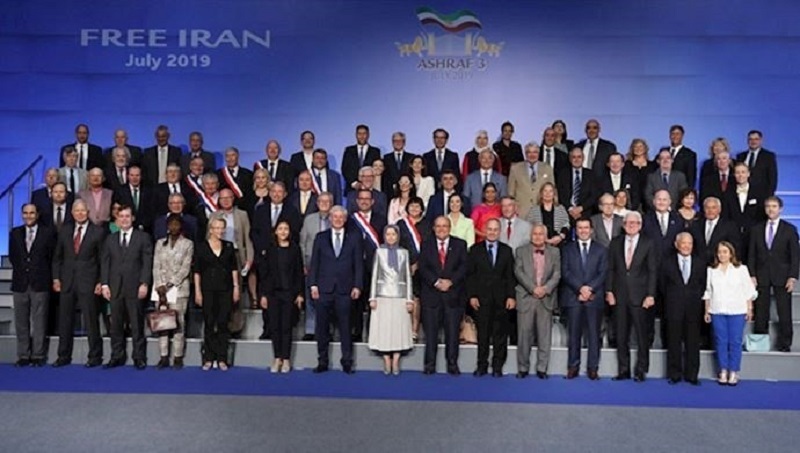 Political personalities have participated in various international conferences in Europe and the US demanding protection for Ashraf residents, and the delisting of the PMOI/MEK both in Europe and the US. Legal action by PMOI/ MEK in the UK, at the European level, and in US courts, led to historical judicial decisions annulling and removing the terror tag from the PMOI/MEK. In the United Kingdom, 35 parliamentarians challenged their own Home Secretary in court, ending with the court ruling in their favor and ordering the de-proscription of the PMOI/MEK. In the United States, several high profile political dignitaries with national security credentials joined the court as amici curiae in support of the delisting of the PMOI/ MEK. Since delisting, international recognition of the Iranian Resistance and in particular support for Mrs. Rajavi’s Ten-point Plan for the Future of Iran has been on the rise.

After relocating from Iraq, MEK members are stationed in a compound called Ashraf 3 living safe and secure. Recently, Ashraf 3 hosted a five-day international conference attended by many dignitaries, lawmakers, and officials from around the world. They traveled to Albania to take part in the 2019 Free Iran rally. The guests included the former US. Vice- Presidential Candidate Senator Joseph Lieberman and former New York City Mayor Rudy Giuliani. The Washington Times wrote: “Iran’s largest opposition group opened the doors of its new home base on Saturday with a wave of praise from political leaders from both the left and the right, hailing from nearly 50 countries and all enthusiastic about the group and its goals.”